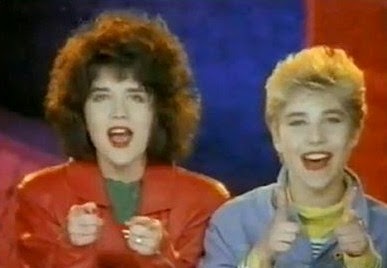 Does it ever bug you out how much Simon Reynolds looks like Aisling the dark haired sister from The Reynolds Girls? Betcha it must really bug Simon Reynolds out because I'd Rather Jack said more about teh great Popism Versus Rockism debate in 3 minutes than Reynolds has managed in the past 25 years he's spent prattling on about the topic.


Dunno if the blond haired sister Linda died during childbirth as urban Scouse legend suggests, but she did sing on this tuneless Netto C&C Music Factory knock-off in 1992. As for Aisling, urban Scouse legend swears she's that fat bird in the LFC replica shirt from the Sefton Park Netto who became a minor meme a couple of years back, Dunno if that's true either, but Merseyside deserves its own Fallen Madonna Sonia With The Big Boobies.
Posted by Kelvin Mack10zie at 19:46

Email ThisBlogThis!Share to TwitterShare to FacebookShare to Pinterest
Labels: lip sing more, why you wanna do that luv huh?, youtube

The first Frankie Goes To Hollywood album aside, Stock Aitken & Waterman are responsible for the ONLY good music to ever come out of Liverpool: You Spin Me Round by Dead Or Alive, You'll Never Stop Me Loving You by Sonia, and I'd Rather Jack here.

Simon Reynolds and Joy Press covering I'd Rather Jack would be preferable to ever reading Retromania.

No way that's the same woman.