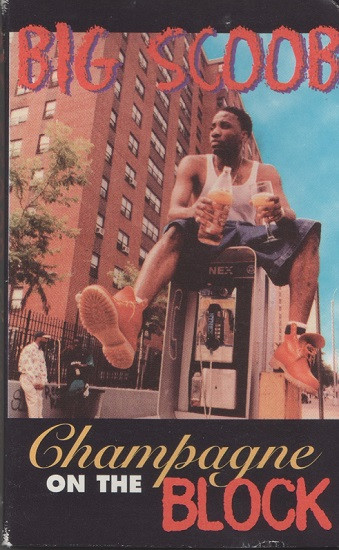 Obligatory wrap-up post of those songs I've played most during the month when I found out that the cassingle of Big Scoob's Champagne On The Block had an amazing front cover. Those of us who own the 12" got shafted.

Other notables: I'm still not tryna hear G-Herbo soundalikes over Jersey Club beats but Asian Doll's song featuring Bandmanrill is hot like summertime with corduroys; Seiji Oda's What It Feel Like is a cool little stopgap song; as someone who has a soft spot for French Montana I didn't need him on a remix of the best U.K single of 2022.

PS: they were only Lil' like Chris, but I made a couple of playlists this month: five New York 12" songs I love and my top 5 NorCal Rap songs of 2022 so far.

PPS: I wouldn't necessarily say that Playa is one of my favourite songs on the Knucks album, but that chorus stays richochetting and reverberating around my head, so I've ended up listening to it more than the album's de facto best songs.
Posted by Kelvin Mack10zie at 18:30 7 comments:

Email ThisBlogThis!Share to TwitterShare to FacebookShare to Pinterest
Labels: awards, Big Scoob Hive, Champagne On The Blog, rap, why you wanna do that luv huh?

You were ALWAYS the bellhop, Mr. Ezale


The Andrehick Hotel Motel has a new employee - heeeeeere's Ezay. I did say that Ezale songs tend to be different than the snippets suggest and that's certainly true with this one because the I Get Around beat-switcheroo from teaser number two is now entirely slo-mo Screwed. WTF - the Pol Pot of the Pillionaire's Boys Club keeps pretzelling my pomegranate, man. Regardless, Ezale singles are always mini-movies in musical form. Gonna tell my kid this is The Shining.

Ezale caught the Furley Ghost with that Stupid Doo Doo Dumb moment @ 1:34. Best sittin' on the bog reveal scene in a music video since Tom DeLonge in Blink-182's All The Small Things.

"N*gga, stop talkin', just come suck it
When it's smoke, bet the opps gon' duck it
We kick smoke up, they kick buckets"


How come none of you fooken' humps told me about this song eh eh? Could end up being my favourite 2022 song which #actually dropped in December 2021. There's a recent remix of this with Flo Milli which is a better City Girls single than City Girls' latest single, but the remix ain't as satisfying as Monaleo's solo original. As D.W Griffiths' nearly said, all you need is a girl rhyming about her guns.

Other contenders for my favourite 2022 song which #actually dropped in December 2021: Sometimes by Tony Shhnow and Road To Riches by Yuno Miles.
Posted by Kelvin Mack10zie at 00:30 3 comments:

Email ThisBlogThis!Share to TwitterShare to FacebookShare to Pinterest
Labels: I got the hood on my back like it's rainin', late pass!, rap, texas


Marky Mark, The Mighty Ducks, Good Vibrations on my fave song from Homeboy Sandman's new Lost Tapes type album. Conclusive proof that every New York rapper of note should beatjack Diamond D's Freestyle (Yo That's That Shit) for a Lyrical Exercise song. But then, you knew that already if you've heard Sean Price's 60 Bar Dash, right?
Posted by Kelvin Mack10zie at 00:30 11 comments:

Here at The Martorialist we keep a stylus pen like a fiend keep a pipe with him, so here's another quick quinary of quality playlist. Revisiting Big Scoob's early 2000's singles has got me in the mood for some personal classic New York 12" singles, thus here's five songs I love like RZA & Kool G. Rap loved Cakes. Cool thing about this era of New York Rap is that everybody who was deep in them record racks and up on them webstores experienced shit differently, and so songs like Missin' Linx's Can't Be Stop or Lord Sear's Ya Mouth Stink might not have entered your orbit but they're both 5 Star General choonz to me.

1. Phil Blunts' Yonkers classic On The Attack which should be a proper New York classic. N.Y drama-core that's so good it can make me overlook Phil's very #problematic line about rape.

2. Had a soft spot for Consequence ever since I heard Rock N Roll. Alongside ATCQ's The Jam, this is one of the best examples of late 90s clip-clop Dilla production imho.

3. Not a lotta people know this, but the second best song Blahzay Blahzay & P.F. Cuttin' ever recorded is Ice Grillz. Some mean-muggin' Brooklyn winter warz Rap.

4. B-1 is best known for his guest spots on Kool G. Rap's 4, 5, 6 album and his two singles on Rawkus Records, but for Q.B connoisseurs his true Dunn-Rap hall of fame tune is Put Yo' Self In My Place.

5. There were only two good things to come from Rakim's tenure with Aftermath Records: the Truth Hurts song he guested on and the Ayatollah banger A Cold Feeling. Supposedly recorded for The Wash soundtrack, it woulda sounded perfect on Kay Slay's first compilation.

Big Scoob's Kryptonite was a minor classic which rang out alongside Ante Up in summer 2000, but I've only ever seen it uploaded online as the instrumental. Perhaps Kryptonite is a true You Had To Be There™ tune: Big Daddy Kane's former back-up dancer dropping a Superman theme sampling indie single which became a Funkmaster Flex Tunnel Banger™ staple. Here in the U.K, Kryptonite was a rare example of a Westwood favourite which got love in Mr. Bongo by British backpackers who had their Jansports strapped too tight. Step Won came thru with the Ronaldinho to Rivaldo type assist, so I threw the MP3 up on Audiomack and Mediafire. Ya gun got dust in it from not bustin' it!


Be rude to leave you without another Big Scoob song to step to, so here's the lesser known U Got It. Scoob on some I Got It Made braggin' & boastin' over a certain Bobby Byrd break. U know the proto-Top Shelf 8/8/'88 steez.


Anyone got an MP3 of Scoob's Say It Loud? Never heard it meself, but it could be cool if it's a JB sample. Alternatively, it could sound like a Drag-On album track which is why I'm hesitant to spend a tenner on the 12".
Posted by Kelvin Mack10zie at 10:00 7 comments:

Did somebody say just Eat?


You know how Homeboy Sandman's Talking (Bleep) is just Conjugal Visit To The Prison Of The Mind re-tweaked with rhymes about pet peeves and a hook made from a wah-wah guitar sample? Eatem's Magical follows a similar trajectory: it's just Go Get Yo' F*ckin Brotha re-tweeked with rhymes about "your girlfriend" and a hook made from the BR Cowboy restaurant jingle & Russ Meyer sex EFX. No shotz @ Sandman or Eatem because there's nowt wrong with that in either instance - craftily re-tweaking your own songs is the 7th element of Rap music.


Been waiting on this one since a snippet appeared last summer. It sounds as Transylvanian as expected but arrives with two pleasant surprises: a Glorilla cameo and Duke dressed in Beethoven garb like Biz Markie in the Just A Friend video. Hat tip to Duke and Eatem for bringing the fun back to hardbody Rap.
Posted by Kelvin Mack10zie at 09:30 5 comments:


This has to be the first good Shady Records single since... since.... since..... who even knows? AIGHT's appeal: it inadvertently sounds like Nef The Pharoah made a Kendrick Lamar song. Or rather, it's some Siccness.net type shit unintentionally disguised as some HotNewHipHop.com type shit. A happy accident where Big Tymin' meets Big Steppers.

DRAM changed his name to Shelley FKA DRAM but let's not indulge him. Son, you're DRAM AKA the Cha Cha guy.
Posted by Kelvin Mack10zie at 10:30 4 comments:

Can I say shit? Do it for Matthew Africa, do it for Gary Warnett.
It's no coincidence that E-40 and Boosie's music both took a turn for the worse when they stopped wearing premium LVC Levi's jeans and switched to ugly distressed Eurotrash denim with ridges on the knees. You can't be an American outlaw when you're dressed like a Spanish footballer.

Hurricane Chris is making a comeback via a Jersey Club remix of Ay Bay Bay that's blown up on TikTok. Personally, I can't wait until the Jersey Club community discover ReUp Reedy's For That Dick.

For decades, "yeah, but it bangs on the dancefloor tho!" was a mostly accurate gauge for judging Rap music. Then KanYe Pest's Stronger made it an unreliable barometer before Drake's career and Godawful shite like A$AP Ferg's Shabba rendered it an utterly useless measuring stick.

One for the Britz: Dave East's music is the Rap equivalent of Michael Owen's punditry.
Posted by Kelvin Mack10zie at 00:30 10 comments:

There's Consequences to this shit


The return of Rap's official G.O.A.T weed carrier (though he was none too pleased to accept the title.) And over a KanYe Pest beat which is hard enough to rattle Consequence's proto-Rylan dentures. Surprisingly good, but maybe I shouldn't be so surprised since Cons rapping over KanYe production has been a G.O.O.D Combination™ since their pre-College Dropout back-and-forths like The Good, The Bad, The Ugly and Take It As A Loss. Plus, can't forget the ultimate solo ConYe track which doubles as one of the best The 'Hood Done Took Me Under (Its Wing) songs of the 2000s.


**EDIT** added the Blood Stain video because it features Consequence practicing blackbelt-level Rap Hands on a Martian beach. Makes sense he has a such a strong Rap-Hands game because the first video he ever appeared in was the Rap-Hands equivalent of Citizen Kane.
Posted by Kelvin Mack10zie at 10:04 29 comments:

"First I tell 'em, where I want it done
In his backyard right in front of his son
Then I tell 'em, where to drop him off
In the Chattahoochie with his dick chopped off
Yeah, it sounds harsh, but it's well deserved
Feed his ass to the Sharks for hors d'oeuvres
No remorse, and no pity
This could happen to you in New Joc City"

Yung Joc - A Couple Grand
(From the Atlanta underground; 2006)


File this under 'beatjacks which are better than the originals.' Yung Joc was always more of a Juvenile than a Jeezy and his flow on this shit is pure New Orleans. I remember Rey turning his nose up at Yung Joc's Bad Boy Records debut album like "I prefer his underground shit" and this beatjack of Shawty Lo's I'm Da Man is Joc's equivalent of Mase's pre-Bad Boy Murda Ma$e Children Of The Corn material. Cot-damn, this song is wicked and plz believe that's wicked meaning evil. If there's a Hell below then Joc is possibly gonna go as a result of this one.

In Shawn Prez's recent VladTV interview with Yung Joc, Joc mentions a pre-Bad Boy local hit of his called Thousand Ones. Alas the only trace I can find of it online is in a Billboard magazine article. Anyone got the MP3?
Posted by Kelvin Mack10zie at 12:30 6 comments:

Email ThisBlogThis!Share to TwitterShare to FacebookShare to Pinterest
Labels: Atlanta, late pass!, rap, where you at Rey?

New York's alright if you like slam-poetry elevator muzak


First new P-Lo single of 2022. Conclusive proof that Bay Area Rap is one of the only sources of Real Hip-Hop™ left: there's more scratching on this than there is on any New York Rap song of 2022.