Obligatory wrap-up post of those songs I've played most during the month when Max B got hench. Maybe he's been using yoga to get swole? Makes sense since he's been in prison for a long stretch. Really doe, free the King of New York already!

Other stuff: I made a post which links all the Audiomack playlists I've made so far this year; lotta hot music new and old contained in them there playlists. I also found out that Max B got the Why You Do That instrumental by a stroke of serendipity caused by New York traffic.
Posted by Kelvin Mack10zie at 00:30 5 comments:


Duke Deuce · Duke Deuce - ANNA
Fresh for Samhain you (blood)suckerrrrssssss! Duke Deuce is one of those rappers who drops a lot of Shawshank, but Redemption comes in the form of a grand imperial stomper like Anna. A tale from the Memphis darkside that's as fun as a Halloween rewatch of The Monster Squad. Fun is the key word in that sentence because Duke Deuce's best songs reassemble the old motifs of Memphis Rap in fun new ways which make you wanna kick the nards off your nearest Wolfman.

Email ThisBlogThis!Share to TwitterShare to FacebookShare to Pinterest
Labels: Anna are you okay?, Favourites from the flicks, Memphis, rap


Via this video, sum shit I read: the production duo Arkatech Beatz made the Why You Do That beat for Jim Jones and arranged a meeting with him at ByrdGang's studio, but then got caught up in heavy traffic and by the time they arrived Jones had left. Max B was still in the studio writing and recording and told the Arkatech lads he'd pass their beat CD on to Jones, so they left it with him. Max listened to the CD, heard the Why You Do That beat, loved it, decided to keep it for himself, and the rest is history innit. Now, I'm a big fan of O.G ByrdGang era Jim Jones, but praise the Lord for New York's heavy traffic that fateful day. A stroke of serendipity which was both fortunate and glorious.


A quick browse through the Arkatech Beatz production discography reveals that Why You Do That is easily the best beat in their entire catalogue. That said, they were also behind the title track of Big Pun's first album so fair play to the lads.
Posted by Kelvin Mack10zie at 12:00 10 comments:


What do you get if you cross DB Tha General's classic intro with Yuma Nakamura's Japanese City-Pop hit Dang Dang? Seiji Oda donned his DJ hat and found out by blending both songs together on some Ron G type shit. Worlds are colliding and, unlike George Costanza, I'm happy to find myself stuck in the middle.

Email ThisBlogThis!Share to TwitterShare to FacebookShare to Pinterest
Labels: bay area, not-rap, rap, WE GON' BRING THIS CITY SHIT BACK!, yumo me mang

Call me Erik ten Hag the way I'm dropping 5's out here (geddit?) Here's another Quinary Of Quality playlist, this one consisting of some 2022 Martorialist favourites which are lesser celebrated elsewhere on the Rap Internet. 5 Songs by AD, Stunnaman02 & DrewBanga, Mouse On Tha Track, Westside Boogie & DRAM and Wavy Bagels which each deliver something very singular. True story: I almost weep with joy at how wonderful the Mouse song is.


Never in a month of black sundays & blue mondays did I ever imagine that perennial L.A hack-turnt-Adam 22's token black friend AD would drop a song I'd really like, but that's exactly what All I Do is. A notable new entry in my personal canon of Shinola Songs By Shitty Rappers.
Posted by Kelvin Mack10zie at 00:30 4 comments:

Email ThisBlogThis!Share to TwitterShare to FacebookShare to Pinterest
Labels: Born To Audiomack, Quinary Of Quality, rap

Okay, New York's no longer paved with gold, at least it's paved though... ya know? Here's 5 Homeboy Sandman songs from 2022 + the arse end of 2021 which I much prefer to anything on his last EP There In Spirit. Some traditional New York Rap from a slightly untraditional perspective. As I've said before, Sandman is kinda like Rammellzee if he were born in 1980 and had emerged at the arse-end of Bobbito's Fondle 'Em era. So give it up for Boy Sand - N.Y.C's only working rapper officially approved by Edan and Doja Cat.

Random old song that's been my jam lately: Style by Craig Mack. Combining the Spoonin' Rap bass with the South Bronx horn-stab was such a good idea that I can't believe nobody'd done it before the song's producer Mark "Prince Markie Dee" Morales hooked it up for Mack in 1997. R.I.P to the pair of them.

As great as Mouse & Level's I Bet U Won't is, for true #Mouse&LevelHive members Get It Back will always be their best song together.

I read Pitchfork's 30 best House songs of the 90s list because Philip Sherburne is someone who genuinely knows his onions about dance music. Or, at least, he usually does because he said Masters At Work's The Ha Dance was the House song which blew up the Trading Places sample in 1991 when it was #actually Seduction's Seduction in 1988.

Ain't gonna lie, I was almost as pleased to find the CDQ MP3 of Y@k Ballz's TCK as I was to find the CDQ MP3 of Jacka's Heavy Rain. Apparently Y@k recorded TCK for his debut EP on Fondle 'Em Records but Bobbito wouldn't let him include it because the song contained a rogue N-bomb - a fair decision when the rapper who dropped it looks like a Persian lesbian dressed as a 90s U.K Hip-Hop fan.

Real Lies are probably best experienced live on MDMA, but I caught them live while on mushrooms last night and still Felt Like I Was Part Of Something™ - just without the dreaded MDMA comedown today. It's very much a Boss Trick night when you can even find magic in the parlance of the venue's pissy bogs.
Posted by Kelvin Mack10zie at 12:30 8 comments: 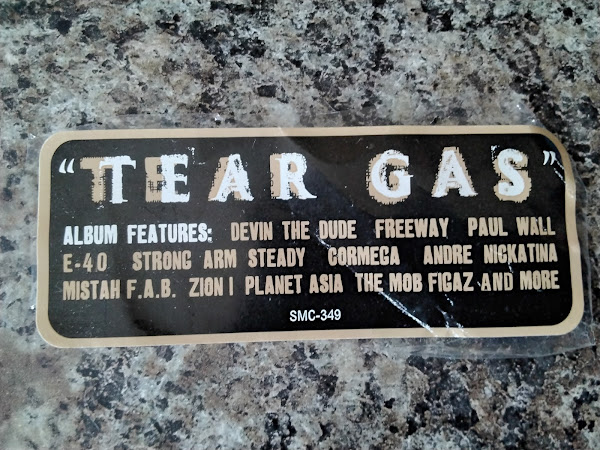 On one hand, it was a game-recognise-game moment when Devin The Dude got top billin' on the hype sticker for Jacka's Tear Gas CD. On the other hand, it was shameful that Cellski got shafted for sticker-space when he was behind the boards and the microphone for the album's arguable best single. Damn, homie - Cellski made Streets Of Frisco but he still got knocked out the box for Planet Asia.

Email ThisBlogThis!Share to TwitterShare to FacebookShare to Pinterest
Labels: bay area, Granit Jacka, R.I.P Jacka, rap, why you wanna do that luv huh?


Highlight of Mouse On Tha Track's most recent album has gotta be its closing equivalent of Millionaire Dreaming from Millionaire Dreamzzz. Mouse clearly realises this because he's shot a video for it on a Nature Boy Alan Titchmarsh type theme. Forget the science, it's not rocket salad - a catchy feelgood song is thee shit to fertilise your soul. Might hit Mouse up for some horticulture tips because my money plant is looking like it's about to declare bankruptcy.

**EDIT** The album's other main single has grown on me too. It's exactly what you'd expect from a Mouse X BeatKing song and that's why it's so effective as a higher echelon booty-chatter bangeur.


Bonus beats: it's always good to see Baton Rouge's new generation hitting up Mouse. In the past few days alone both NBA Youngboy and WNC Whop Bezzy have come calling. The NBA song has got all the attention, but it's the WNC song which makes far better use of Mouse's talents.


Who dis: Lil' Maru has a flow which shapes monotone into melody, so he's kinda like Lil' Peep if Peep were reincarnated as a Mexican zoomer gangbanger rapper from San Diego. Part of me wants to investigate Maru's music further to see if he has any other songs up my road, but it's probably not gonna happen because I have a very low tolerance for 70 BPM sad boi production. That's okay, though - a lotta rappers are best experienced via the Busy Bee Principle where you boil their entire career down to two songs. Here at The Martorialist we call it a Deuce And Dip.
Posted by Kelvin Mack10zie at 12:00 1 comment:

Can I jump back and kiss myself like James Brown one time? I'm on the Blogspot and I'm feelin' myself, if your musical taste is lookin' bad then my Audiomack playlists are here to help. Here's a round-up of my best Born To Audiomack playlists of 2022. Let's go deep into this Rap shit: First there's Edan Deep Cuts which is a buncha songs taken from his 12" and 7" singles. Big fan of how Edan created his own little musical universe by combining Percee P's Lung Collapsing Lyrics with the Beastie Boys' Paul's Boutique.

Then there's The Best of Seiji Oda which collated sixteen songs he'd dropped over the past two years before anyone on the Rap Internet was paying attention. Seiji's music has been a cool breeze of fresh air for me in this current era of Yaseo The Ruler boring NorCal Rap.

There's Eatem's Greatest Pressure which is a compilation of his best singles from 2016 to 2022. I like to think of Eatem as Baton Rouge's equivalent of Duke Deuce.

There's Nef The Pharoah's Quinary Of Quality which is my top five songs by him from the past two years. Still a big fan of his Thizz Khalifa sound when he gets it right.

Then there's Mac Dre & Khayree's 1996 - 1998 Sure Slaps which collects the best songs they recorded during that period before they fell out. Probably the best playlist of the bunch because Dre & Khayree were one of the greatest rapper/producer combinations of the 1990s.

There's a Homeboy Sandman 2022 Quinary Of Quality featuring my top 5 songs by him from the past 12 months.

And then finally there's lesser celebrated 2022 jams Quinary Of Quality featuring songs by AD, Stunnaman02 & DrewBanga, Mouse On Tha Track, Westside Boogie & DRAM, and Wavy Bagels which haven't had much love from elsewhere on the internet.

Oh yeah, I also used the Good Combination™ of Blogspot & Audiomack to upload a couple of songs which weren't streamable anywhere online: Stezo & Dooley-O's EPMD dis Piece Of The Pie and Big Scoob's minor classic Kryptonite. Cheers to Plug Step Won for the MP3 hook up on the latter song.
Posted by Kelvin Mack10zie at 18:00 18 comments:

So we should be thankful for the Showtime At The Apollo performances where the rappers and the audiences are in total synergy as their lose their collective shit together. Best example has gotta be the post-Biggie 1997 Bad Boy roster's medley of It's All About The Benjamins and Mo' Money, Mo' Problems which could only be improved if Lil' Kim and Biggie's ghost joined them onstage to perform their respective verses. Peep the dearly departed Black Rob playing his position on baseball bat swinging hypeman duty.


Bonus beatbox at The Apollo: Doug E. Fresh living up to his title of The World's Greatest Entertainer™ by killin' it from his seat in the audience with a medley of La Di Da Di, The Show and Bel Biv DeVoe's Poison featuring BBD and Tony Rock. A performance so good even the musical input of a backing band couldn't ruin it.