Obligatory wrap-up post of those songs I've played most during the month when Pusha T reminded me that he's now an overwrought bore who was only good at sounding nonchalant over Neptunes beats next to his brother back in the noughties.

Also wrote about beats I wish Slick Rick had got, dropped a list of my favourite beatjacks ever, and paid tribute to Dezzy Dez Slay.
Posted by Kelvin Mack10zie at 11:00 15 comments:


... and speaking of beatjacks, how very apt that A-Wax remaking Woodie's The Streets Are Callin' Me has got me interested in 'Wax's new music. As soon as Suge hear this here, he gon' know it, man - the vibe is here to bring the real A-Wax back. He's doing a full Woodie homage album so there's a very real possibility we may get A-Wax over the cheap Cruel Summer facsimile of Norte Sidin'.


Yo KanYe Pest, I'm really happy for you and I'ma let you finish, but Bananarama had the best Cruel Summer of all time etc etc. From London to Los Angeles, please believe Brooklyn was in the house too.

Email ThisBlogThis!Share to TwitterShare to FacebookShare to Pinterest
Labels: NorCal, not-rap, Plus I'll tell ya what the 80s like, R.I.P Woodie, rap

Thievery is the very essence of Hip-Hop, with stealing being the first element of Rap music. So, it was inevitable Rap would evolve from replaying other people's tracks, to sampling bits of other people's tracks, to straight jackin' other people's entire tracks. True beatjacks don't feature any contribution from the people who originally recorded the tracks; thus, songs like Juvenile & Mannie's Set It Off, Dipset & Master P's Bout It Bout It Part III and DJ Jazzy Jeff & Peedi Crakk's Brand New Funk 2k7 are música non grata in the official Martorialist top 40 beatjacks list right chea. A great beatjack doesn't necessarily have to be better than the song it jacked, it just needs the new author to stamp their own imprint on it.

Now, I wouldn't say Dem Boys is the G.O.A.T Max B beatjack, but it is his most miraculous since he transformed the W.O.A.T Eminem song into something Wavy.

From Islington to Ibiza


More British kitchen-sink melancholy meets Balearic dancefloor magic. Real Lies dropped their new album this past friday and Dream On is the song on there which comes close to rivalling Boss Trick. Never could have imagined that Pet Shop Boys as fronted by Giggs and produced by Alex Palmer from V4Visions Records would be a sound which tickles my fancy but here we are again. Roger Lloyd Pack is dead, but Trigger's dulcet monotone still rings out in the London air.
Posted by Kelvin Mack10zie at 11:30 6 comments:

Email ThisBlogThis!Share to TwitterShare to FacebookShare to Pinterest
Labels: not-rap, one 4 the Britz, Real Lies Shit.

"If I take another hit I'll forget ya name, but we high so she can't complain
Now I'm finna run a train when I'm wit' Mary Jane and it's crazy she was thinkin' the same"


Well, this is different than the snippet suggested innit? Then again, the same was true of Day Ones and We Want Some Pussy, so it's best to disregard yer prior assumptions with Ezale singles. The subject of Ironic is weed, but this shit sounds as jittery as a Messy Marv interview. Thus, Ironic is a sniffer's song in smoker's song clothing.

Ezale videos always go XXXtra in the best way. That's the paradox of Ezale - he's the legit dirtbag rapper who makes his NorCal peers look like lazy bums with their presentation. Remember when he used the All It Take video as an audition to replace Daniel Craig as the next James Bond? Potential titles for Ezale Bond movies: You Only Thizz Once and The Man With The Golden Blunt.
Posted by Kelvin Mack10zie at 21:44 13 comments:

Biiiiiitch, stop talkin' that shit and trick Dezzie Dez his outfit
He wants some plaid Levi's like Lil' Slim told ya. 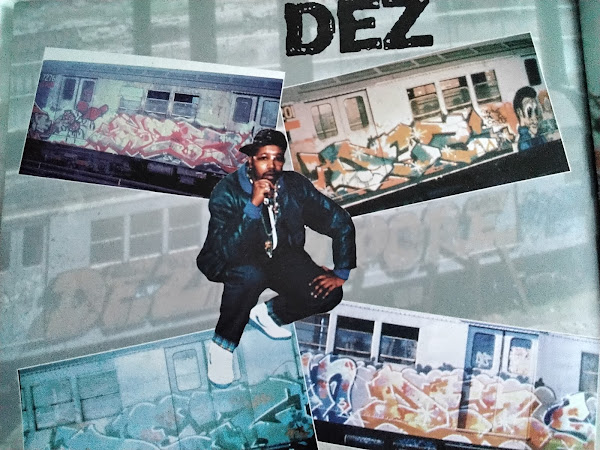 Belated rest in peace to Harlem's (drama) king of tartan turn-ups DJ Kay Slay AKA the artist formerly known as Dez. A legend in two games like Andrey Arshavin or wot? Or rather, a legend in two entirely separate lanes of Hip-Hop in two entirely separate eras. Personally, I can't listen to Duke Bootee & Melle Mel's The Message without hearing/seeing Dez and Kase2 rapping the song to each other on the train platform in Style Wars. Similarly, there's songs I first heard on Kay Slay mixtapes which would later sound incomplete without his ad libbed bellowing on them. To paraphrase the big man himself ONLY KAY SLAY COULDA DONE THAT, YO!

Kay Slay's own compilation albums often tended to answer questions which nobody had ever asked, questions such as what would Papoose, Yung Joc & Chamillionaire sound like on the same song? But wedged between the mismatched posse cuts of rappers who should never share song-space there were always exclusive gems. Here's ten nuggets of gold from them there DJ Kay Slay compilation albums.

Let's not remember Kay Slay's late-career for giving Papoose a second wind. Instead, let's remember Slay's late-career for being the only DJ to play A-Mafia songs on New York radio. Here's hoping Heaven got an easily accessible train yard packed with pristine wholecars for Dez to bomb. Here's also hoping Heaven got Black Rob waiting with a USB stick of unreleased songs Slay can bellow casual threats to bitchass DJ over.
Posted by Kelvin Mack10zie at 17:32 11 comments:


Pardon the Phat talk Rap tourettes. Doctor Eatemstein reactivates and reanimates the dearly departed Trill Fam young'n Lil' Phat. This one combines what I liked about Lil' Phat with what I like about Eatem in the SAME DAMN SONG! The result: Martorialist catnip in toto.

Bonus beats: the Lil' Phat legit jam which should have been a legit hit is Talk Some Mo' Shit. The world would have been a more fun place if this song was as big as Independent. That shit lived a private life when it shoulda been all in the mix.

Be a father to Tha Camp


Best Bleed song in a Louisiana minute, love his sleepy uncle drawl on the hook. Young Bleed flipping Hamilton Bohannon's Singing A Song For My Mother into a Pentecostal preacherman baptism Rouge anthem is such a no brainer idea that I can't believe it hasn't happened until now. Shout out the apostles, God forgives Baton Rouge rappers with rogue apostrophes.

Hits from the Bong


Talk about So International - a Jamaican lad and a London lass make an Afro-Bashment choon that's big with dancers on social media. Never would have guessed Christale is the Militant girl because she sounds so different here freed from the constraints of that stupid U.K Drill flow.

And in completely unrelated news, here's a brand new Ezale snippet. Word around (Funk)town, this song and Hotel Motel are dropping together on Nevuary 1st.

They Shouldn't Have Got It: 5 beats Slick Rick should have got instead 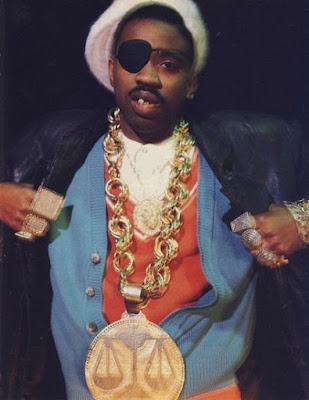 B-Fats - The B-Fats (1987)
The Show gave careers to Slick Rick and Teddy Riley, so it's a pity they didn't work together again in the late 80s. The B-Fats was a 1987 Rooftop classic for B-Fats, but in Slick Rick's hands it could have been an all-time classic full stop.


Vicious ft. Doug E. Fresh - Freaks (1994)
On one hand, Freaks is the G.O.A.T babby-dancehall song. On the other hand, every Doug E. Fresh beatbox backing track should have gone to MC Rickoi D, and, yes, that includes Virgo.


Fat Joe ft. Krs One - Bronx Tale (1995)
One of Diamond D's most sublime productions deserved far better than Fat Joe's autocued grunting and KRS One rhyming about cum-splattered Rap magazines. Why why why didn't Diamond save this beat for Slick Rick's post-prison comeback?


Jeru The Damaja - Not The Average (1996)
If only Doctor Who would go back in time to 1996 during the recording of Jeru The Damaja's second album and tell DJ Premier to stash the beats for Not The Average, Ya Playin' Yaself and Me Or The Papes until Slick Rick came home from prison. TBF, Jeru did kill Not The Average, but he has such a finger-wagging puritanical tone that the song would be drastically improved if it were performed word-for-ford by Rick instead.


Reflection Eternal - The Blast (2000)
Only Talib Kweli's own mum could possibly prefer him over this beat to Slick Rick the ruler. Rick and DJ Hi-Tek could keep Vinia Mojica on the track doing the backing vocals, but have her singing RICKY instead of KWELI.
Posted by Kelvin Mack10zie at 10:00 14 comments:

Email ThisBlogThis!Share to TwitterShare to FacebookShare to Pinterest
Labels: rap, Slick Rick fansite, What If?


More proof that good things come in twos like boobs: Cookiee Kawaii has dropped two singles so far this month... and they bump! Fly Away is the post-lockdown sequel to Vacation on the JeR&Bsey Club tip; and Is U Mad!? is Hip-House with a 70% Hip-Hop/30% House ratio. Both songs are exactly what I want from a visit to the Jersey Club shore.

People tell me I should listen to Bandmanrill and other rappers who use Jersey Club beats, but I use Jersey Club artists like Cookiee Kawaii and UNiiQU3 as a partial detox from Rap music. Thus, the absolute last thing I wanna hear over Jersey Club production is another G-Herbo soundalike lad.
Posted by Kelvin Mack10zie at 01:30 2 comments:

Plenty of Oda fish in the sea (part 4)

"I ran into your bitch and she looked mesmerised
I look into your eyes and you looked petrified
Dumbfounded! Ambushed! Bamboozled!
Is how these n*ggas feel when they find out I ain't losin'"


Get ya probiotic game up if ya stomach's spidey-senses ain't tingling right. An older song by the Big Steppin' guys Stunnaman02 & QuakeBeatz that's as good as Big Steppin' IMHO. Primal scream piano-slap, and when I say primal scream I thankfully ain't talkin' about Bobby Gillespie, boiiiiiii.

Bonus beats: free them guys on the inside, Stunnaman02 & his saxophonist m8 were them guys outside performing Gut Check live on the block during quarantine 2020. Ban ALL buskers except saxophonists no IMHO necessary.


Bonus bonus beats: Stunnaman02 & Lil' Kayla's recent N.OrCal Bounce back-and-forth is my shit too. Kayla says they dont rap they just speak facts, but I'm unconvinced by Stunnaman02's claim that a booty has ever tasted like Skittles. Peanut M&M's maybe...

Lucas Moura is a professional footballer who plays for Tottenham Hotspur and the Brazil national team.

"My mother used to tell me that there's plenty of fish in the sea
But why play anybody else when you can listen to me?
There hasn't been a threat to mention since I stepped on the scene
So, I'm off to save a cat that's stuck in a tree"


HomeboySandman · A!
New Sandman loosie. Same considerably more egghead-than-you vybz as his latest EP, but much more pleasing to my ear here. I ain't gonna sit here and pretend there's any intellectually or musically rich reason for this - I just enjoy him saying "A! A! A! A! A! A!" in his funny Rammellzee voice over a beat that's all bass like Clear Lake fishing ¯\_(ツ)_/¯

Really doe, "find you a predilection, make it to an addiction" is some A+ game.
Posted by Kelvin Mack10zie at 13:30 5 comments: