A late 90s episode of MovieTalk where Jonathan Romney, Anne Billson (author of the definitive book about The Thing!), and the late Alexander Walker justify the existence of movie critics, and discuss the strengths and weaknesses of Buffalo 66 before Vince Gallo comes out wearing a U.S.A tracksuit to respond to their criticisms :

"I had seen 40 Ozu films in Paris in a row and they were all in Japanese language, which I don't speak, subtitled in French, which I never wanna speak..."


Here at The Martorialist we're so enamoured with MovieTalk's format, we're going to be spending our saturday night filming the first episode of our forthcoming Youtube show RapInternetTalk where Brian "B Dot" Miller and Jordan Sargent sit around in our kitchen arguing about Finally Rich before Chief Keef and David Drake lope in and respond to each of their charges. The show will be hosted by none other than Will High and it's guaranteed to rake us in some of dat Anthony Fantano vlogger loot.
Posted by Kelvin Mack10zie at 17:15 6 comments:

Jesus done David Blained his way out of the cave, Soulja Boy came out the water like a pretty-ass dolphin, and I just clambered out of bed this good friday to drop a list of my 10 favourite Rap songs of 2013 so far to K.I.M :

Harlem got the ad lib game on lock like HMP Slade or Wentworth Detention Centre, son! Don't believe me, listen to Jim Jones bellowing "THEY FOREIGN!" after his "and my cars, they sumthin' from overseas" line on Lil' Flip's I Get Money for the absolute pinnacle of the artform and then tell me I'm tryna bluff you.

Still, while Jim may hold the title of the G.O.A.T ad lib, there's another Harlem native that's been adding impromptu exclamation points to songs for donkey's years now. Here, then, is a definitive and undisputable top 5 list of Puffy's greatest ad libbed laughs on Rap records ever.

1. The earsplitting echoed "UH-HAAAAA!" on Special Delivery after G-Dep says "let her do a skit and then she hit my producer".

2. His sly chortle after Ma$e says "never been arrested for nothin' domestic" on Feel So Good.

3. His suggestive snigger on Been Around The World after he says "it's ridiculous how you put your lips on this/don't kiss right there, girlfriend, I'm ticklish" .

4. The shrill "HAAAAAA!" after the infamous "don't worry if I write rhymes, I write checks" line on Bad Boy 4 Life

5. Every single snide LOL of his on Biggie's Hypnotize.

Fire Bork With Me

I'm from the Chi, but I only smoke west coast

Whoop-de-frigging-doo, another song about smoking weed! Only it isn't really because that hook is just a handy doorknob for Mic Terror to hook his usual array of vaguely Positive K-ish cockiness and smut on, and the most west coast thing about this cut is that the beat sounds like a Young L remix of HA! :


Mic Terror - West Coast
(From the upcoming The Fresh Prince Of Darkness mixtape; 2013)


Still disappointed the entire Rap-Internet fronted on Rodney King last year, especially given some of the half-arsed Chicago Rap joints all y'all jocked. I'm not tryna hit you with a "it's not you, it's me!" here, guys; more like a "it's not me, it's you!" I just feel like we're drifting apart nowadays.
Posted by Kelvin Mack10zie at 10:13 1 comment:

Although he's never quite delivered on the promise of Boy Looka Here and Let's Get This Paper, ya gots ta hand it to Rich Boy for not breaking kayfabe by always sounding like he's making the Dat Ass face when he's rhyming. The beat on Kill 'Em Cold from his new mixtape sounds like it should have soundtracked one of the spooky forest scenes in Tod Browning's Dracula, so it makes sense that it'd be the perfect scrim for him to black-out on and drop a 5 minute soul-baring humdinger about how only champs sip on pain as the 'tape's centrepiece :


Alas, because this is Rap where nothing ever follows conventional logic and nobody knows what the hell they're doing, the reality is that it's a cool quick-16 interlude about broke h8erz which lasts 1 minute and 33 seconds.
Posted by Kelvin Mack10zie at 13:59 6 comments:

Ask and you shall receive! Hey presto, King Louie's back on track with a video featuring girls fighting for what's literally and figuratively his song stoopeedo :


If you missed it last year, here's the slightly different original version of Band Nation (with less prominent trippy background effects and no backwards Pong-blip breakdowns) which was supposed to be on Dope And Shrimp :


King Louie - Band Nation (O.G version)
(From what was supposed to be the Dope And Shrimp album; 2011)

After that new Rae & AZ cut dropped yesterday, your boy Fredo was reminded of a late 90s mixtape minor-classic with that same damn sample by the Rap Game Jackie Aprille Jr. AKA Genovese : 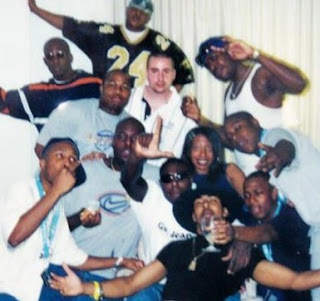 
You know how Danny Bonaduce was the token whigga in every early 90s west coast video? Well, Genovese was his late 90s N.Y equivalent. A staple of DJ Clue mixtapes throughout 1997/1998 who made his debut on the Show Me The Money 'tape with Genovese Thesis featuring Styles P and was known to drop N-bombs like RiFF RaFF in those 2007 - 2009 videos on MySpace which have now been wiped from the internet, his story is way too convoluted to get into in full so here's the footnotes : the grandson of Vito Genovese, hung ten with The Lox since he went to high school in Yonkers with them, Biggie wanted to sign him, rumoured to be the reason that the Feds were following Biggie the night he was killed because they thought Biggie's mate D. Roc had ties to the Genovese crime family, dropped from Universal Records 3 weeks before the release of his debut album due to Jay-Z and Dame Dash having him blackballed after he tossed a few jabs in Jay's direction (the Roc-A-Fella posse track 4 Da Fam was essentially a sly Nelson Muntz "HA HA!" to Genovese since it used the same sample as the title track of his shelved album.)

While the mythology surrounding Genovese is way more interesting than the music he made, I'd sell my right big toenail for a CDQ version of Thumbs Up, and he did sound pretty great as the O.G Jae-Hood rhyming alongside The Lox on those old DJ Clue 'tapes. Speaking of which, if you thought Everything I Got was the first Lox song to interpolate the Cheers theme song, then get yo' timeline correct because this other mixtape minor-classic from Clue's aforementioned Show Me The Money 'tape pre-dated it by a decade :


Genovese strikes me as being the type of Rapper who vanity-Googles himself religiously, so plz don't have me shot up and then chopped up for the Jackie Aprille Jr. comparison, eh mate?
Posted by Kelvin Mack10zie at 13:28 5 comments:


Smoother than Aldi manuka honey (half the price of Holland & Barrett but twice as sweet!), this is that Rap musik for us ageing sophisticated gentlemen members of Robbie Unkut's Conservative Rap Coalition who always secretly thought AZ & Raekwon's Doe Or Die remix should've been the pair of them rhyming over the original N.O Joe beat.

Over on Steady Bloggin', Alex is using his shirt as a lasoo as he pretends he's partying on Roman Abramovich's yacht to this, here at The Martorialist it's inspired us to hire Dapper Dan to knock us up some fake-MCM print Sperry topsiders that've been stitched by Japanese 4 year olds.

Has King Louie's March Madness gimmick been a total bust?

Well, no, not entirely since the Young N*ggas Countin' Racks cover is what would've happened if Pen & Pixel would've been drafted in for some KMD artwork, but I lost interest in the series after the 4th boring song in-a-row during the 1st week.

Has Louie dropped anything good since then (I wish he'd release the incredible We Like To Party already!), and when will Rappers ever realize that releasing half-arsed songs every fucking day for a month is a sure-fire way in making sure their fanbase tires of them? Dude should've just shot videos for/pushed Band Nation and More Bandz instead.
Posted by Kelvin Mack10zie at 20:41 No comments:


Smokey And The Bandit, quizzers! That was the name of the CD C-Loc & Boosie were supposed to drop as a duo in 2000 before C-Loc got locked up. The actual facts go even deeper into the Bayou than that, though, since the album was originally billed as C-Loc & Young Bleed until their squabble over scrilla put pay to that and the young upstart of the Concentration Camp Boosie was drafted in to replace Bleed on the adverts for it. What a pity we ended up getting neither version of the album when both combinations of the Camp sounded so good shootin' the shit on songs together :-(

Anyhoo, back to the grillz again : 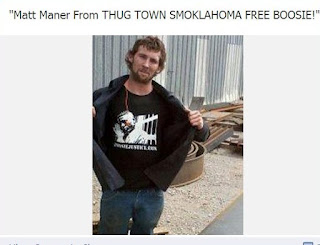 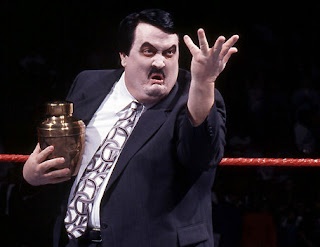 If Alex Ferguson was any kind of proper manager, he'd have used a mystical urn to revive Man United after Nani got sent off last night; just one of the many reasons why football will never be as good a sport as wressling, b.

LOL @ the improbability of Scott Hall outliving all these motherfuckers. Pour one out for Paul Bearer, who's hopefully up in wrasslin' Heaven airlocking Sherri Martel with Ravishing Rick Rude and Captain Lou Albano right now.
Posted by Kelvin Mack10zie at 11:14 3 comments:

Wanted dead or alive : Satisfied by Skull Duggery with Mystikal

It's currently monday morning and I think we already have a viable contender for the mixtape of the week award : an 100 song deep No Limit edition of Cassette Tape Classics by DirtyGloveBastard with DJ Breakemoff, DJ Dow Jones and RichboyGFX.

Never heard any Skull Duggery beforehand aside from a few cameo verses on other No Limit songs and, typically, all the RAR links to his These Wicked Streets album are dead now I wanna hear that shit. Youtube only has a radio edit of Satisfied courtesy of none other than Frankie Tha Lucky Dog, so could someone be a dear and hook me up with an MP3 of the regular dirty version of Satisfied plz?

Related note : all the time I'm readin' Frankie, 'cause it seem like he the only blogger makin' sense to me. Check out his tribute video to Magic/Mr. Magic.
Posted by Kelvin Mack10zie at 11:36 5 comments: 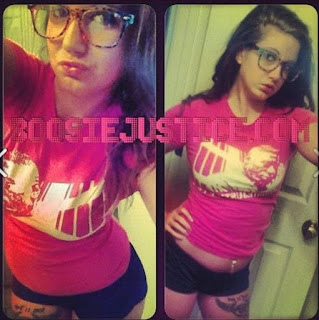 Needless to say, this one has been goin' thru some thangs since it went live on the Boosie Facebook page yesterday :

"I'm the sickest, and yeah we online
girls sendin' naked pictures of they fuckin' behind"

Email ThisBlogThis!Share to TwitterShare to FacebookShare to Pinterest
Labels: Martorial elegance, rap, That girl gives brain that girl gives knowledge, why you wanna do that luv huh?

Linked the Harlem World performance of Cali Chronic on Soul Train in the comment section a few weeks back, but it pro'lly deserves its own edition of Martorial Elegance due to Loon's oversized FUBU Canadian tux' and Blinky Blink's boxy all-white outfit, which is the missing link between Ma$e's get-up in the Been Around The Water video and Chopper's infamous suit :