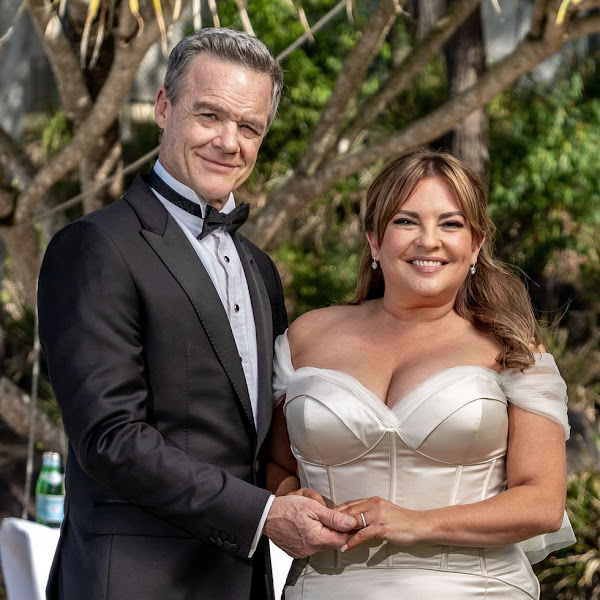 Obligatory wrap-up post of those songs I've played most during the month when the bottom (and chest) fell out of my TV world. British teatime television without Neighbours? Yo, that's like jewels without ice, China without rice, or Smooth B without Greg Nice. Words I never thought I'd type: BRING BACK RICHARD DESMOND AS CHANNEL 5 BOSS!

Other notables: I need a no Auto-Tune mix of Eatem & Dwill's Rock Paper Scissors; quite like Homeboy Sandman's The Only Constant even though he's kinda irksome on it; drumless Warren G is far better than drumless Faux Marciano rappers; unfortunately for my taste, Duke Deuce & Rico Nasty's Falling Off is more like a Rico Nasty song featuring Duke Deuce rather than a Duke Deuce song featuring Rico Nasty.

Other stuff: felt compelled to note how white guys on the Rap Internet look like members of Pop-Punk bands and took a trip down teenage Crimes Against Clobber™ lane. Also enjoyed Party Sparty on non-American movie soundtrack Funk jams and some bloke from The Guardian talking to Street Sounds CEO Morgan Khan.
Posted by Kelvin Mack10zie at 14:31 8 comments:


What's beef?: Beef is when Stezo got kicked off EPMD's tour as their dancer for fighting with Parrish Smith, but then scored his own record deal with EPMD's label Fresh/Sleeping Bag much to EPMD's chagrin and blew up when It's My Turn became a hit. Parrish fired a subliminal at Stezo on So Whatcha Sayin' with the "and when we needed a piss, boy, you was hired" line and DJ Scratch called Stezo out when EPMD performed the song at the 1990 Rap Mania concert in New York.

The beef is on: Stezo got wind that EPMD had dissed him onstage and recorded a response track which Fresh/Sleeping Bag owner Virgil Simms was more than happy to release since Stezo's debut album Crazy Noise had done very decent numbers. Unfortunately, Fresh/Sleeping Bag Records went bankrupt in late 1990 before Stezo could release it and the song remained in the vaults until Stones Throw Records released it on 12" back in 2004. Piece Of The Pie AKA the song where Dooley-O predicted the title of EPMD's sixth album nine years before it dropped.


Beef, what a relief: Would Piece Of The Pie have had any real impact on EPMD's career? Probably not, but it would have made for a very nice single, preferably with Police Story on the B-side. Where it might have had an impact is that, had it been released in 1990, Large Professor probably wouldn't have used the same Nautilus sample for Main Source's Live At The Barbeque in 1991. Thus, the posse track which introduced Nas and Akinyele to the world might have sounded very different. Even Kodak couldn't picture that.
Posted by Kelvin Mack10zie at 14:57 7 comments:

A bird in the dance is worth two in the bush

"Chicken walk all in your house all on your couch
Need to learn to keep my name out of your mouth
Before I pop you in your top, watch shit pour out"


Sometimes all you need is a disrespect NorCal dumb knock with its own dance - call it the Big Steppin' effect. Peep the Bird Walk tutorial at the end of the video, but never forgot who invented the O.G bird dance.

Geological poop, I got shit straight and updated my Edan Deep Cuts playlist with a couple of songs I'd slept on. Dope Rhymes For Sure should be retitled Dope Song Full Stop and Rap Beautician is Edan's musical manifesto on wax. His M.O: a smart-arse Jewish Rap nerd who did his own beats, cuts and rhymes, and created his own sound by combining Percee P circa 1992 with Paul's Boutique era Beastie Boys. It probably shouldn't have worked, but it very much did. Check back this time next year to see if I've finally added Beautiful Food.

Bonus beats: you know how Edan has a boner for early 60s British Rock? Betcha he'd love How by The Jynx. Can't decide whether this shit is like The Monkees doing a Merseybeat song or if it's like a Merseybeat band doing a Monkees song. Either way, it has the illest Dingle alley cat harmonica.

Plenty of Oda fish in the sea part 2


Two songs which coulda been on my best of Seiji Oda playlist, different sounds which still find parallel lines on the Slap-Tranquilo scale. Seiji says he mixes the lo-fi with the Hyphy, I say he mixes the Makonnen with the Mac Dre. Now, I didn't care for Makonnen's music beyond a couple of tunes, but there's no doubt that echoes and richochets of Makonnen's sound can still be heard throughout Rap - just listen to Valee or Veeze for proof.

Flashback to the time some people got mad because I said Makonnen looked like Rickie from My So Called Life if he'd ate all the pies. Was I wrong, though?
Posted by Kelvin Mack10zie at 02:00 4 comments:

This Is Tha Barker 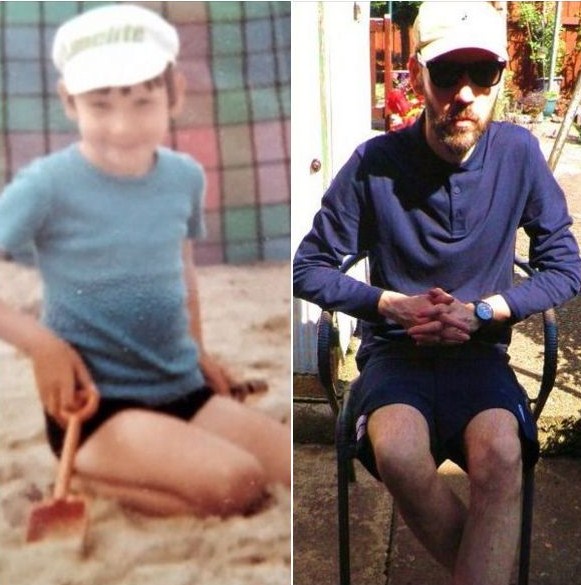 Remember me? Did it all for the B-L-O-G. True story: every white guy on the Rap Internet resembles someone from a Pop-Punk band. I'm reliably informed that I'm a Travis Barker guy, and I ain't even mad at that - it's infinitely better than being a Dexter Holland guy, a Milo Aukerman guy or a Tye Zamora guy innit? If you're unfortunate enough to be a Deryck Whibley guy then take some solace that you look like a bloke with two 10/10 singles to his name and a hot wife on his arm.

Let's talk gear. If Rap music didn't inspire you to wear stupid shit as a teenager then being into Rap music as a teenager was wasted on you, mon square. Me, I done shocked everything from clocks around my neck, Reebok Pump hi-tops on my feet, visors on my head, XXL Ben Davis shirts on my back, and 42" baggy jeans on my 32" waist. But my biggest Crime Against Clobber™ was copping a pair of snow-camo cargo pants in 1991 in a misguided attempt to look like Public Enemy's back-up dancers the SW1s. Them kecks were wack like World Cups, but by 1992 they'd become great beater pants to do graffiti in, particularly since the cargo pockets came in handy to pilfer cans of paint from Halfords and Kwik Save. We were a gang of Goonies lookalikes doin' Subway Art recreations, shout out my CD brothers with fly names and I.D questions. 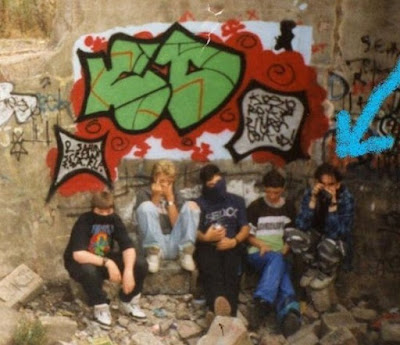 To paraphrase a very different Travis B, snow-camo cargo pants have followed me my whole life everywhere - in bars, in cars, sidewalks, stores, even in Blink-182's All The Small Things video where Travis Barker wore a pair. You can fight for your right to party, but you can never fight your sartorial destiny. Probably shoulda bought two pair like Nelly.
Posted by Kelvin Mack10zie at 09:41 17 comments:

Email ThisBlogThis!Share to TwitterShare to FacebookShare to Pinterest
Labels: "see me posing for the camera yeah the damn magazines", Barker 6, Martorial elegance, rap

"And when I hit the club I know they hate me
A lotta n*ggas do it but they ain't me
Couple shrooms I be feelin' like I ain't me
But don't move, Ima keep the thing on safety"


Gotta love when a HARD rapper drops some grown and gorgeous harp shit. Uncle Murda's Bro Shit was 2021's best example of the sound, and Compton AD's All I Do is 2022's first entry in the canon. So pretty and yet so nasty - All I Do is like Meena from Emmerdale in song form.

Lacazette lookalike AD definitely missed a trick by not filming the entire video inside his car for big Locke intimacy. Inside looking out like the 2nd best Animals song.
Posted by Kelvin Mack10zie at 12:00 12 comments:


MP45 has been uploading 12" single cuts which have never been on YouTube before and this song by Memphis rapper Playa G is my pick of the bunch. Full disclosure, ya host had never heard this original mix or the album version before but I prefer this one, meself - the vocals get lost a bit in the album mix with all the added synthesiser warbling. Gucci Mane always says Project Pat was one of his favourite rappers, gonna hazard a guess he was a big Playa G fan too?
Posted by Kelvin Mack10zie at 10:30 8 comments:

Born To Audiomack: the best of Seiji Oda

"Any time I put on jeans, it's Japanese denim
They ain't even Japanese, I just happen to be in 'em"


Surprised myself by how much I like his sangy Auto-Tune songs. The reason they work for me is that they're very warm and fuzzy and are still distinctly Oakland. No Fillins, for instance, is dreamy R&B which interpolates Cupcake No Fillin by the Trunk Boiz. Told you that Seiji has unexpected depth like a Japanese bathtub.
Posted by Kelvin Mack10zie at 17:30 32 comments: