Obligatory wrap-up post of those songs I've played most during the month when #TeamMartorialist found themselves on a dance floor with Ainsley Harriot. Fun fact: the king of supermarket couscous knows every word to California Love.

Other notables: lemme get a no Auto-Tune mix of Crash Out by OMB Peezy & the Sherwood lads because "that funny voice shit" erases everything which makes Peezy so distinct; sorry SOB X RBE, but Foxy Brown already recorded the definitive Cruel Summer flip back in 2003; listened to those two new Creek Boyz tracks and came to the conclusion that they're currently a One Song Wonder™ in the vein of Sicko Mobb, imho; Don't even need to hear the new Migos album to know that it's a 2018 equivalent of a late '90s Das EFX double disc; No idea who Odee is, but in the video for his Janky Individual song he's wearing a Puma tracksuit version of the Chopper Suit.
Posted by Kelvin Mack10zie at 12:04 7 comments:

Everyone who pretended that Migos have EVER released a full length project with more than two good songs on it now have the LP they deserve: the album which goes on forever. Forever ever? Forever never seemed that long in comparison to Culture II's track listing.

Of course a certain someone was warning about glib idiots overrating Migos full lengths back in 2014.
Posted by Kelvin Mack10zie at 17:24 15 comments:

Email ThisBlogThis!Share to TwitterShare to FacebookShare to Pinterest
Labels: I'm not a poptimist BUT..., just sayin', rap, why you wanna do that luv huh?

"Look, I just popped a perc, it make me feel good
I fucked my cousin and I still would"


The entire Put That On Gang band is back together again on their Funky 3 + 1 type shit. Trel Itz A Hit really does have an uncanny knack for reassembling the classic motifs of Louisiana rap production in fresh new patterns: don't start no shit, but do Do The James 2k18.
Posted by Kelvin Mack10zie at 10:28 2 comments: 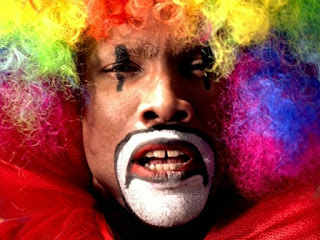 That last 5 is a roundabout way of saying that there hasn't been a Rap Music Hysteria post since october. That's a huge pity since RMH host SE was the first person to post songs by the WNC crew and OMB Peezy, which basically means he's more important than 99% of the self-styled tastemakers on the rap internet.
Posted by Kelvin Mack10zie at 20:57 9 comments:

Fuck breakdancing, Famous Amos' I Bet U Wont challenge videos are the official 4th element of Hip Hop kulcha now. Has any member of the Rock Steady Crew ever danced in a moving vehicle? No? Then I rest my case, y'honour.

Fall back 4 elementz survivalists because breakdancing was only ever any good within the context of Style Wars. After that it's just a bunch of Japs, Krauts, and Brits rolling around on the floor together, gurning and grabbin' their nutz.
Posted by Kelvin Mack10zie at 17:22 1 comment:

If old Timbaland productions are gonna get gaffled, then it's better for everybody concerned if U.K Afrobeats artists of Ghanaian descent do the gafflin' rather than XXXtentpoletudor weed carriers. Respect to the jack king JD, but Shithole Countries™ FTW in 2018.


Bonus Timbaland beats: who caught John Barnes shakin' it like Louise Woodward when Ginuwine performed Pony live in the Celebrity Big Brother house last week? I hope Heaven got a WiFi signal so tha gawd Gary Warnett can see this:


Actual facts relax: Louise Woodward and John Barnes used to be real life neighbours in the early noughties. They don't call ya host Dead Perez for nothin'.
Posted by Kelvin Mack10zie at 21:16 6 comments:


Dunno if anybody else has noticed this, but Nice & Smooth's We Are No. 1 seems to have been removed from all streaming services. Why couldn't God have taken Something I Can't Explain instead, right? Think of We Are No. 1 as one of the first successful attempts at Boom-Wop, just don't think of calling the lawyers representing Joe Cocker's estate.

Anybody else got any examples of random songs from rap albums which have been removed from streaming services due to sample clearance?
Posted by Kelvin Mack10zie at 17:13 9 comments:

Email ThisBlogThis!Share to TwitterShare to FacebookShare to Pinterest
Labels: rap, underrated jams, why isn't this on youtube???, why you wanna do that luv huh?

30 legit jams from the year that Heathers was released, Kenneth Williams was declared deceased, and the number of great rap albums significantly increased.

I got a bucket but that bih feel foreign


Like the Laughing Stock lads once said - Life's What You Make It. This shit's nutty like Carlos is the pecan mane, so ya host had to give this one more than a mere honourable mention. Very raer modern remix which is a remix in the traditional sense of the word.
Posted by Kelvin Mack10zie at 19:50 1 comment:

"Post Malone wanna be black
He gettin' rap money, but he tryna downplay rap
*Ima smack him!*
Paul Rosenberg called him out on that
I hope G-Eazy don’t do nothing stupid like that
*He better not!*"


Dead @ Uncle Murda confusing Peter Rosenberg with Paul Rosenberg on his 2017 Rap Up. Nine minutes long, though? Are they pressing this up in a Sugar Hill Records sleeve for Record Store Day 2018 or summat?
Posted by Kelvin Mack10zie at 19:48 9 comments:

I Bet U Won't look good on the dancefloor

The data has been compiled, the numbers have been crunched, and the conclusion is official: the I Bet U Won't Challenge was officially the best viral dance #challenge of 2017. Best song, funniest videos, most durability over the span of 12 months, first opportunity to point out that Peter Pan Dan is really Turkish from Arsenal Fan TV in disguise. You did it, Baton Rouge, you did it!

Here at The Martorialist we can forgive/forget Mouse's awful 2017 album of Atlantafied industry pandering purely off the strength of I Bet U Won't blowing up.
Posted by Kelvin Mack10zie at 10:00 3 comments: