Obligatory wrap-up post of those songs I've played most during the month when nobody needed the return of that rapist Yung Gleesh.


Mac Dre - Just Listen (demo) (1989)
70th Street Carlos - Rich N*gga Bitch (2017)
70th Street Carlos - Fat Girl (2018)
DJ Premier ft. Casanova - Wut U Said??? (2018)
Valee - Allat (2018)
Sada Baby & FMB DZ - Planet Of The Apes (2018)
Kreayshawn & KJ-$ - Not My Job (Punk Cover) (2018)
Other notables: Yang Style gotta be the best song Chippass has dropped since the glory days of NhT Boyz (God bless DJ Fresh!); I'd probably dig that new Edan song if you didn't have to be in a secret club of ageing streetwear scenesters to hear it in full; not that into WNC Ram Bam & 70th Streer Carlos' Rod Play meself, but I'm happy to see ppl enjoying WNC music; Babyloaf's Yo' Bitch Mobbin' is noteworthy for being the birth of Hyphy Wap; Dres from Black Sheep's FUGITUP had the potential to be as good as his Top Shelf 8/8/88 song if there wasn't an unfortunate air of Wicked22ness to it; it's cool that someone rhymed over Trel Itz A Hit's instrumental remake of Beelow's I'm A Beast, but I'd rather just listen to the original meself.
Posted by Kelvin Mack10zie at 08:45 6 comments:

"I got Skube wit' me and it's Mob, no Ice Cube wit' me
Got your boo wit' me, she sucked me off, I gave her two-fifty
Can't be too picky, 100 blues, this shit too sticky
No new n*ggas around me, that shit too iffy"


File this under ‘2018 Rap songs with references to Da Lench Mob.’

This also explains why ya host would rather watch Ken Kaniff get gangbanged by D12 than ever sit through an album by any member of BandGang. No shotz @ the bennies or the Lonnies - I just don't think of you like that, lads.
Posted by Kelvin Mack10zie at 18:49 5 comments:


File this under ‘songs ya host really wasn't expecting to dig.’

It's Super Producer Pree & Casanova Thug! (Geddit?) Uncle Murda isn't scheduled to release another good track until next year so this will do very nicely as 2018's slab of olde-worlde Brooklyn nastiness. Like Paul Joseph Watson nearly said, the Conservative Rap Coalition is the new counterculture.

Tryna remember the last Primo production I liked and it was that Game song with Master P lolz.
Posted by Kelvin Mack10zie at 17:32 5 comments:

Wanted dead or alive: an MP3 of Real Bad Promo by Edan

Edan Real Bad Man Season 1 Bootleg 7” - White label. #VeryRare Given to family and friends to celebrate the first drop of the line @real_bad_man This KrautRock inspired jam classic features Edan the Humble Mag akak @edanexists one of the funkiest cats around and a uber producer/ rapper who just destroys the Can classic Vitamin C.. With his crazy chop of the infamous break coupled with some God MC influenced rhyming madness this slice of nice goes hard. love me some Edan the boys nasty with it. The B side is equally bananas as the Tokyo-based Dancehall wizards BIM ONE productions recruit vocalist Mr. Williamz for “Sorcerer”, which samples Tangerine Dream’s synth-heavy theme song from the 1977 cult film SORCERER. This pressing is beyond limited theres only 300 in existence! Done in conjunction with my man @adam208 and his killer new line @real_bad_man there is No digital release of this either u got blessed or you got less. #SuperDiscoBreakin #VeryRare #SaluteEdan #SaluteCan

Spotted on Dante Ross' Instagram, a new Edan song over CAN's Vitamin C. This is only available on some corny purposely-raer promo 7" that's already sold out because it was given away free to the ageing streetwear mafia, and there's no digital release planned. Song sounds like a bangeur, so who's got the 7" and is prepared to rip it?

Quite fond of Edan as a singles artiste here at The Martorialist: the Sprain Your Tapedeck EP (especially Run That Shit), the Emcees Smoke Crack (remix)/I'll Come Running Back To You 12", and the Funky Rhyming 7". Plus, ya host will always have a soft spot for Edan since his Fast Rap mix CD first put me onto Percee P & Ekim's Lung Collapsing Lyrics.
Posted by Kelvin Mack10zie at 10:23 8 comments:

Kreayshawn's Punk cover of Not My Job deserves its own post


1. Best song Kreayshawn's been involved in since Pu$$y Magnet or wot?

2. You wait years for a decent Mac Dre tribute song and then this and Husalah's Bad Young Thing turn up within the space of a couple of months.

3. Saw someone compare this to Nausea, which is unfair because it bodies anything those Commie crusties ever recorded.

3. This is more akin to Kreayshawn fronting a Born Again$t reunion because Sam McPheeters was too busy writing for Noisey that day.

5. The main reason why this is the best Rock song of the 2010's thus far is that, unlike every other Rock song released this decade, it doesn't have terrible lyrics.
Posted by Kelvin Mack10zie at 12:50 6 comments:

It's about that time to make sense of 2018 Rap thus far, so here's a playlist of ya host's favourite songs of the past 7 months. Granted, I'm limited to what's already on Audiomack/what I can be bothered to upload to Audiomack, but at least 95% of my 2018 essentials are included here. One song per artist, natch.

The intro of Sum 41's Fat Lip video is a more credible attempt at Canadian Rap than anything ever recorded by Drake.

Shoreline Mafia are just Brockhampton if they'd met in the NoJumper YouTube comments rather than on the KanyeToThe message board.

New Yorkers under the age of 25 should be banned from making Rap music in 2018.

Apart from a handful of exceptions, New Yorkers over the age of 25 should also be banned from making Rap music in 2018.

Husalah is the ONLY American in the Rap industry who didn't make a complete tit of himself when attempting to comment on "Soccer" during the 2018 World Cup.

When the history books are written, Chance The Rapper will solely be remembered as the annoying twat who ruined Justin Bieber's Confident.

The only good songs to come out on G.O.O.D Music this summer are both by Valee.

What's Hell? Hell is reading Dart Adams droning on and on about video game release dates in his Tweets.
Posted by Kelvin Mack10zie at 15:23 6 comments:

It was all good just a week ago and now it's even better. Updated my 70th Street Carlos loosies playlist with a song I'd previously missed - shit's called Rich N*gga Bitch and it's kinda like I Got A Story To Tell on a Baton Rouge budget, as produced by Mannie Fresh.

The petition to get FrankieThaLuckyDog to review some WNC music starts here! ~~~> ________

"I'm a Soviet, I don't give a fuck
In the Soviets we drink vodka, brah"


Sublime marriage of music and moving image or wot? This upcoming song by the Hands Hands guy is a new entry in the Martorialist canon of potentially-killer songs from the past few years which only exist in snippet form currently. The others?

Email ThisBlogThis!Share to TwitterShare to FacebookShare to Pinterest
Labels: detroit, drop that song ffs, one 4 the Britz, youtube

Regrets, I've had a few, but at least I've never wasted my precious time on Earth listening to Drake albums like some of youz lot lol. PSA, Tamia's comeback single is still 2018's only good song outta Canada, and that shit now has a video:


From Drake and Celine Dion to Michael Bublé and Mindbender Futurama, Canadians have always been varying shades of horrific when making music about love/lust. Thus, it's a major miracle that Tamia can drop a Legit Bedroom Jam 4 Ladies & Gentlemen Alike™ 20 years after So Into You.
Posted by Kelvin Mack10zie at 16:01 9 comments:

Email ThisBlogThis!Share to TwitterShare to FacebookShare to Pinterest
Labels: I'm not a poptimist BUT..., not-rap, Xenophobia Wit That Lean, youtube

Don't push me I'm close to the edge like Florida


Essentially my favourite example of modern Detroit street Rap since Pablo Skywalkin's All Facts. What sets this apart from the hundreds of other songs which sound like this is the production being just a touch grander than usual and Cash Kidd being a king-of-zing on some Tim Vine type shit. There's another version of this with DaBoii but it slaps hardest as a solo cut with Cash Kidd's laughing gas being uninterrupted. 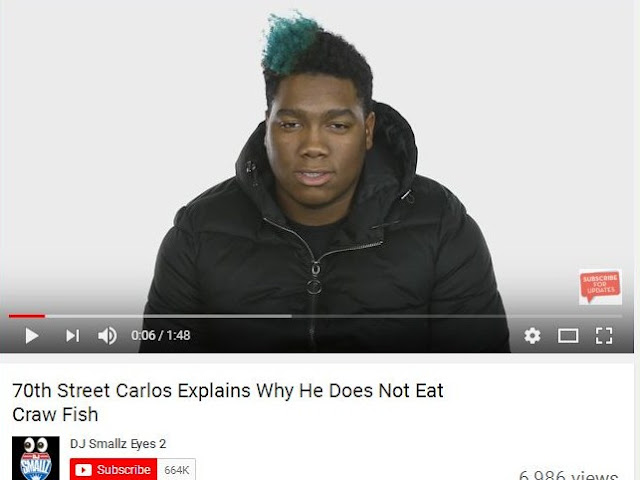 70th Street Carlos AKA Boosie FatAzz AKA Spaz Dillenger AKA Chubb Glock AKA Gumby Knuckles AKA Godfather Dumb AKA Sauce Water. Someone's gotta wrap the best of his 2018 loosies up like a mummy, so it might as well be me. One of the few new rappers whose style is totally his own - all fact, not an imho.


Celebrate what would have been Mac Dre's 48th birthday today with this unreleased late 80's demo intro over Fred Wesley & The J.B's Same Beat. Khayree really shoulda put a CDQ version of this on his first The Musical Life Of Mac Dre compilation.
Posted by Kelvin Mack10zie at 22:34 2 comments:


File this under ‘fam-made videos for songs which never had videos but really should have’ and ‘rap songs which mention Prince Naseem.’ Dunno why Nana Be Like wasn't a single because Foxy performed it live on Queen Latifah's TV show and it's easily the best song on the Broken Silence album.

Kinda cute that Foxy added a bunch of patois to the O.G 1999 mixtape version of Nana Be Like after she started dating Spragga Benz in 2000. You haven't really caught feelings for your boo until you start adopting some of her/his regional dialect innit/int'it.