Obligatory wrap-up post of those songs I've played most during the month when ya host let Ireland down. FYI, Pain In Da Ass was a-ok with me - The Return Of The Diaz Brothers is a boricua-rap classic which woulda been unthinkable without him, and it can't be a coincidence that Jay-Z fell off after his albums stopped featuring Wayne Da Pain.

Other notables: Camp Lo's legit hitherto-unheard Suga Streets really should have been the B-side to Piece Of The Action in 1996 before Ski expanded his production palette and went full-on Coffy Is The Technicolor nostaljack for Uptown Saturday Night; Nef The Pharaoh's Mistletoe is way better than a song produced by Ryan Hemsworthless has any right to be, but it's still a mere Christmas throwaway; I prefer SOB & RBE's Lane Changing more than either of their big singles, but they've yet to make a song that I'd pay 99p for/go to the trouble of rippin' the audio to MP3; I dunno WTF is goin' on in Gunplay's head to make him think that Bible On The Dash Part 2 should sound like a Chinese Jordan Kevin Gates?!
Posted by Kelvin Mack10zie at 12:12 25 comments: 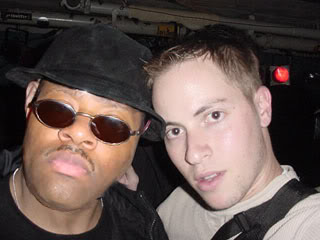 First thought upon hearing the news that Madam "Quest" Walder is closing down the UGHH store in Boston + UGHH.com in its entirely: that store + website still exist?

Second thought: is this karma for the UGHH webstore using RealAudio snippets back in the day and/or the forum spawning 4 eLeMeNtZ survivalist retards like Jaz, AC Tha Program Director, and Wicked22?

Third thought: ain't gonna lie, I did cop a record from the webstore in 2003 - the 7" of Anti-Matter by King Geedorah & Mr. Fantastik. Best DOOM song which ain't on Operation Doomsday, IMHO.

Third thought: Walder still owes me a cheque for my chronicle of the Filipino Frank vs. Immortal Technique beef which spiraled from the UGHH forum to the Fat Beats NYC store.

Fourth thought: my own personal favourite UGHH forum moment was when that Je$$ $antana lass who pretended to be Paul Castellano's granddaughter got exposed as the obese daughter of a Rodney Dangerfield impersonator from Rockville, Maryland.

Fifth thought: quick, someone find the thread where Chuck Wilson from Babygrande Records got busted sock-puppeting his own releases under the alias of JEDI MIND TRICKS FAN before Walder vapourises the forums. 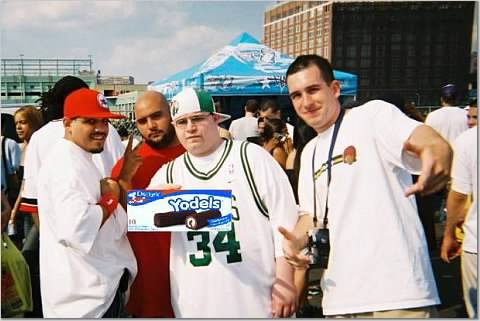 Sixth thought: at least that's one less message board Gentle Jones can spam with his terrible music in 2017.

Email ThisBlogThis!Share to TwitterShare to FacebookShare to Pinterest
Labels: dead perez, dropping like flies, rap, why you wanna do that luv huh?

70th Street Carlos' debut mixtape didn't live up to expectations, so ya host condensed it down to the essentials, added the tracks which should have been included, and ended up with the best EP of 2016. All six songs are produced by Trel Itz A Hit which means Triggaman samples over Louisiana tubas, steel drum Soulja-Rap, beserker Brass Construction breakbeats, and Mardi Gras murder-core. Doz dat pay attention will already know most of these songs, so share this playlist with doz squares dat slept.


Still contend that Consequences wasn't as good as its teaser video suggested, but I suppose there's no shame in not living up to the best in-studio snippet video of 2016. In a cruel and senseless year, be thankful that the universe gently nudged Whop & Carlos into the arms of their soulmate producer.

Where's the GQ article about Whop wearin' Adidas kicks & Tevas sandals at the Same Damn Time in the Consequences video, though? Four Pins died for your tardiness, not mine. 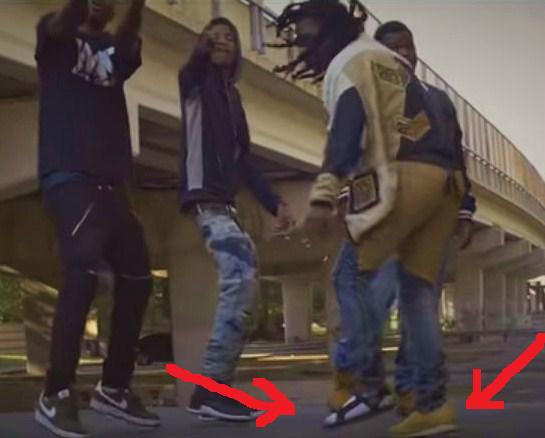 I sit alone in my 4 cornered barn starin' at cows

From the heartlands of rural England to trendy Shorditch circa the late noughties to Houston's motherf*ckin' 5th Ward: it's the classique Barbour quilted Powell jacket. 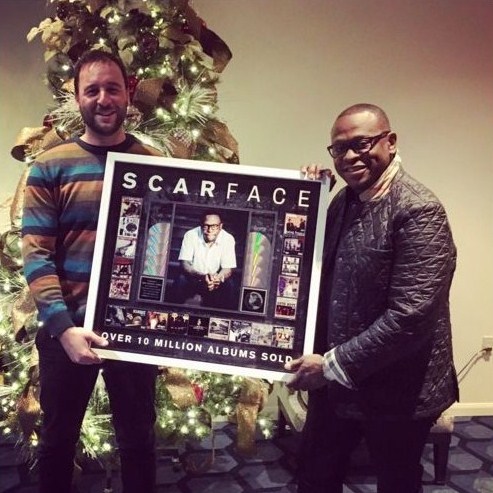 When country-rap goes country-gent. Damn it feels good to be a farmer.
Posted by Kelvin Mack10zie at 19:32 12 comments:


As discovered via Drake's best of 2016 mix, a damn anthem. U.K Afrobeats being better than Real Deal Holyfiend motherlands Afrobeats this year is probably God's way of apologising for U.K Rap being the worst genre of all time.

It was the moment I feared 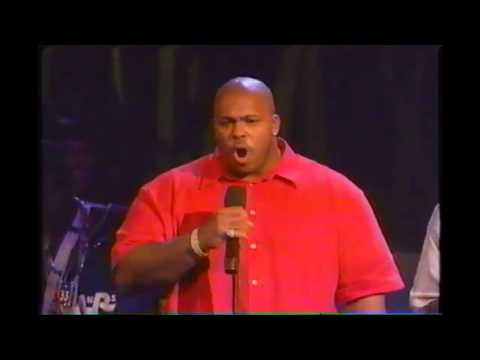 "To all you artists out there who don't wanna record songs where the producer's all up on that shit with a feature credit...all up on the artwork photoshopped.... don't work with Ryan Hemsworth!" 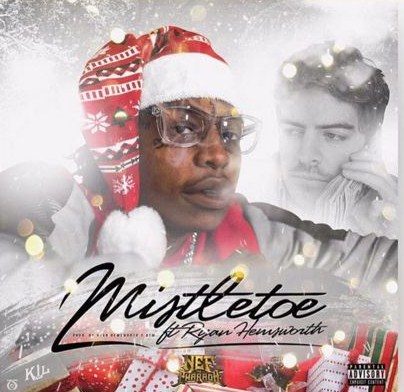 Ryan Hemsworthless finally being involved in a half-decent song after all these years gotta be the rap equivalent of the infinite monkey theorem.

Email ThisBlogThis!Share to TwitterShare to FacebookShare to Pinterest
Labels: bay area, why you wanna do that luv huh?

Can I jump back and kiss myself one last time in 2016? Here's all the playlists ya host put together or kept rollin' this year in one handy post. Make the most of them now before the inevitable Audiomack implosion melts 'em all into the cachemosphere.

Bad-Cop just uploaded a zipfile of the CDQ MP3 of How and 3 other unreleased pre-Bad Boy G. Dep tracks from 1996. I replaced the mixed version of How in my Best of The Deputy playlist with the CDQ version and also added Blak N*gga and Automatic from the zipfile. Throw ya hands in the freakin' air and keep 'em there.
Posted by Kelvin Mack10zie at 11:42 4 comments:

Wanna rock an Xmas sweater to the pub but don't fancy gettin' ostracized by your famalam for lookin' like a Charlie Chester? Never fear because Kap LaGerfeld just got seasonal on datarzz and dropped a Girlfriend Christmas knit that your whole bloodline can wear. Call him Hedi, he's the slim mane.

Still waitin' on the the English-launguage remix of J. Balvin's Reggaeton hit Safari which Kap was teasin' on Instagram with Pharrell a while back. Keys opened doors for them twin brothers who only ever sounded good drippin' nonchalance over Neptunes beats to hop on a Justin Timberlake single, and being Lil' Skateboard P's Latino-rapper mate has unlocked a whole 'nother world of opportunity for the College Park Mexican.

Y'know what song Kap G really needs to jack, though? Gato by No Panty. How's Ray Barretto's El Watusi gotten the tumbleweed & cow dung treatment from rap producers until now when the song was featured in that ol' hip hop touchstone Carlito's Way?
Posted by Kelvin Mack10zie at 11:19 6 comments:

Email ThisBlogThis!Share to TwitterShare to FacebookShare to Pinterest
Labels: Favourites from the flicks, Martorial elegance, rap

You're f*ckin' right I know Lil' Ken and he reckons WNC Carlos has settled on 70th Street as his prefix. You f*ckin' right Carlos' rapping & Trel Itz A Hit's production are one of 2016's most potent new combinations. F*ckin' right Keep A Glock is like a drunken beserker-Bounce version of Webbie's most savage song. F*ckin' right this is just a generic Baton Rouge rap video with teenagers wavin' guns around in someone's garden, but if it stops t'internet sleepin' on the song then it's served a purpose.


F*ckin' right I put together a best of Carlos EP. F*ckin' right all 6 songs on there were produced by Trel Itz A Hit.
Posted by Kelvin Mack10zie at 11:12 3 comments:

... and it's goodbye to the year when KanYe West went from Champions to tinkerman and Claudio Ranieri went from tinkerman to champion... 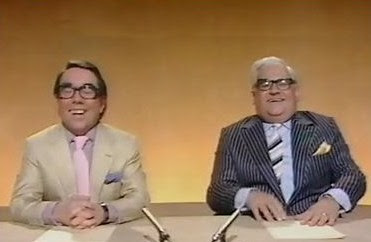 Raise a toast to 2016 - the exact point in history when middle class StanYes officially usurped middle aged 4 eLeMeNtZ survivalists as rap's W.O.A.T demographic. Usual EOTY rules apply here: one song per artist, no order of preference, and a handful of tracks from the filter-end of 2015. If anyone fancies turning this list into a playlist then do it on YouTube because twelve of these tracks aren't available on Spotify or any of its streaming competitors. Shit, four of them aren't on YouTube either, but at least you can find my Rich The Kid-less edit of Rich Homie Quan's Stay Down on the 'Tube (no Paula Yates.)

Basically, sixteen old legit choons that I've discovered in 2016 - a very good year for stumblin' upon gems that I'd previously missed by some of my favourite rappers as it turns out. Cheers to Frankie, BigSleep, Marcello, Noz, SE, Rey, and REDlite for the seven joints they put me onto, and thanx to myself for finally comin' across the other nine.

Now is the winter of our vanity content, where everyone inflicts their favourite songs of the year on t'internet via all manner of convoluted lists. Here's 16 legit jams from the past year or so which aren't even rap songs - instead we got House shit from Chicago dons and cheeky Nando's dons, U.K Afrobeats shit, Dancehall shit, Ghancehall shit, R&B shit, girl-group pop shit featuring Ty Dolla $ign, and future-FunK shit which bangs that little bit harder than DāM-FunK's usual shit.

"I feel like I'm Marty McFly, wat' me just travel in time
I need a bitch from the '80s, wat' me pull up with a dime
I been livin' like a rock star, rips in my jeans when I slide
Hot box the Delorean, roll up some dope and get high"


Did my damnedest to resist this Reys-Cafe find but I can't deny its Legit Slap status any longer. Still prefer it didn't have those trendy Atlanta production tics, but the kid $aatchi definitely has himself something akin to a 2k16 Reagan Era with this one. If there's two things Bay Area rap needed right now it's a song which samples the G.O.A.T Vaporwave tune, and a sixteen year old Armenian Travis Barker lookalike rapper who caught the holy ghost of Chazmaniia.

Crazy thing is Rich The Factor just dropped a new song with the exact same sample. The Oakland-to-Kansas City rap connection ain't had no love for Diana Ross' It's Your Move until 2016?
Posted by Kelvin Mack10zie at 13:38 11 comments:

Youze rap critics have had enough time to milk your articles about how Tribe's new album is a comfort blanket for 2016's annus horribilis, but now it's time to fess up to the unfortunate truth: that whole LP is a mess which depends on the listener sympathising with Phife's death to forgive the album's many shortcomings. The penance for blatantly misleading your readers? 10 Hail Luciens and an hour spent cleansing your sins with this list of 10 noughties legit jams by Q-Tip and Consequence.

Email ThisBlogThis!Share to TwitterShare to FacebookShare to Pinterest
Labels: awards, rap, underrated jams, why you wanna do that luv huh?

"Bitch, you 'bout make me flash
Finna get on ya nerves like I'm a rash
You ain't poppin', bitch, you know you trash
And I'm just statin' facts
If you don't like it, fuck it, we can scratch
Light your ass up like you was a match"


... as in Get Yo' Ass Beat. Surprised this is the first WNC-related song to reach a million views on YouTube since it's not one of the more immediate songs in the Wreck-N-Crew oeuvre, but its charms slowly reveal themselves like as all mid-tempo Baton Rouge fight songs tend to do. Shit might be the best example of that particular sub-genre of Louisiana rap since Mista's Going Down, and Jay Lewis outdoes Whop with his own style - "Say lil' bitch don't make me flash like a picture/I stay in that water like a pickle!"
Posted by Kelvin Mack10zie at 22:29 2 comments:

Born to Audiomack: the best of G. Dep

I got a G-Dep playlist for those who consume shit, I love to do it like Jennifer Love Hewitt. Why? Because G. Dep's music was simultaneously butta and gutter, word to mother, go ask your brother, even when Dep was smokin' sherm he never succumbed to the 1993 Ced Gee stutter. How? By collecting the Deputy's twelve best songs starting with five late '90s indie-era joints, six gems he recorded during his tenure with Bad Boy Records, and the one highlight from his attempted late '00's comeback.
Posted by Kelvin Mack10zie at 17:51 20 comments: