Obligatory wrap-up post of those songs I've played most during the month when drama returned.

Other notables: Boosie's rapping infant daughter is now a teenager who makes the modern equivalent of the music Boosie made during his own teenage years; alas, Nef The Pharaoh's album was too little, too late; hated all of YG's 2018 singles so I didn't even bother with his new album; Jacka's posthumous album with Ampichino is emotional as fuck, but no songs had me rewinding them the way One Sound and and Die Young from Jacka's posthumous album with Berner did. 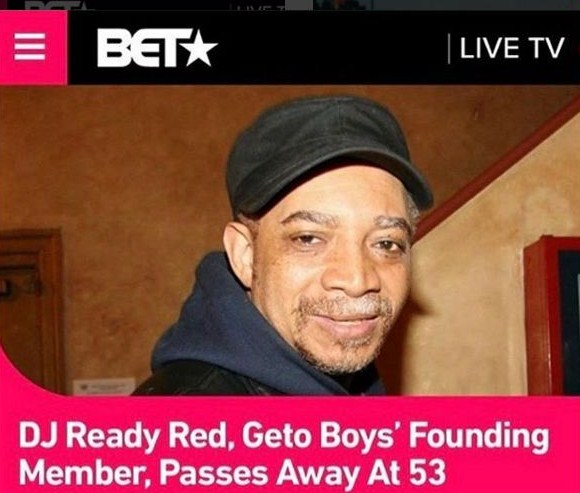 Does B.E.T's website employ the same subs as The Guardian and The Mail Online?
Posted by Kelvin Mack10zie at 18:26 1 comment:

Email ThisBlogThis!Share to TwitterShare to FacebookShare to Pinterest
Labels: dropping like flies, New Jersey, R.I.P DJ Ready Red, rap, why you wanna do that luv huh?


Remember dem dayz when beatboxing wasn't just noise pollution made by busking white lads in peaked beanies or the fifth element of Hip Hop for German #trueskool truthers? Let's cast our minds back to when beatboxing was the backbone of tracks wot banged with a capital B. The 20 best Make The Music With Your Mouth Rap songs of all time as according to ya author Blog E. Fresh.

The Wizard Of Spazz

"I'm fucked up in the head, been like this since an early age
I be clean as a bitch, but I got some dirty ways
Fuck 30 pair of shoes, bitch, I got 30 plays"


Toto, I've got a feeling we're not on 70th Street anymore. This one's a bit different than the teaser snippet suggested innit? To paraphrase The Alliance, I Gotta Get Used To This.
Posted by Kelvin Mack10zie at 12:13 4 comments: 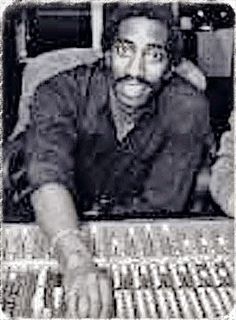 The theory: gangsta rappers have done more to maintain Larry Smith's legacy than the entire grandstanding REAL HIP HOP preservation society. The proof: this list of Legit Slaps™ which sample, beatjack, or interpolate Larry's classic productions for Whodini, Run-D.M.C, and the Fat Boys.

Nef The Pharaoh really overachieved in 2015, huh? That's the polite way of saying his The Big Chang Theory album is neither good nor bad just lacking any of the spark which made his debut EP + the various loosies surrounding it so good. At least his fellow Sic Wid It signee OMB Peezy's album has one undeniable song; the only real slap Nef has in 2018 is Ball Out from his EP with 03 Greedo which only features 30 seconds of his vocals even though he clearly orchestrated the song.


Neffy got needs wings (no Claire Rayner!) Fly, Nefidelaphante, fly, and tell Mannie Fresh to drop your song with him already.
Posted by Kelvin Mack10zie at 19:20 2 comments:

BigSleep presents The Genie Of The Slap: What Would Dre Say?

Claire and her best friend Blair, they square but they come as a pair. Here at The Martorilast, however, we're all about quinarys, which is why our fellow Mac Dre afficionado TheBigSleep came through with 5 zipfiles full of jams from the post-Dre slapmosphere. A quarter of these he found via ya host's turf, and the rest are his own favourites. We're entering your home via Firefox/Safari/IE/Chrome, and you ain't gonna bust a grape in Napa Valley with golf shoes on. 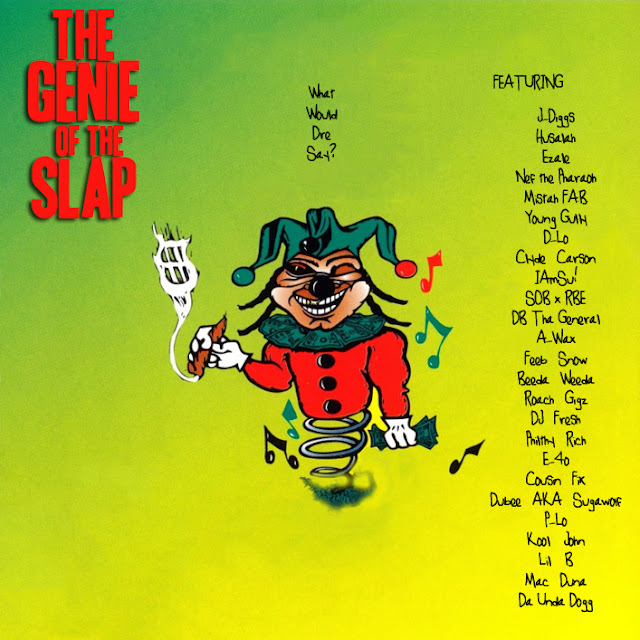 Becky With The Good Arse™

Why couldn't the pirate's wife sit down?
Because someone stole her booty.
Z-Man started from the bottom and set up shop there to write an shambolically lo-fi ode to back-beauty snowbunnies with derrières like 2 planets in a handkerchief. Lord Jamar wouldn't approve of a milk-shark anthem like White Girls Wit Ass, but there's nowt wrong with Z-Man wanting to put a bit of colour into a CAC bird's cheeks if she's looking a bit pale where the sun don't shine. The best song on 4 Hours Of Sleep because it doesn't hit a single bum note.


Here at The Martorialist we're definitely on the P.A.W.G Righteous Teachers tip, but we'd also like to send a fat shout out to all the white girls with no Batty like Leeds United post-2004. You know who else deserves a fat shout out? Z-Man for being the first Courtney Love killed Kurt Cobain truther in Rap. Don't get shit twisted like Fieldy's dreadlocks, though - EL DUCE INNOCENT!!!! It woz Michael DeWitt & Jessica Hopper wot done it (allegedly.)
Posted by Kelvin Mack10zie at 15:35 2 comments:

Email ThisBlogThis!Share to TwitterShare to FacebookShare to Pinterest
Labels: bay area, late (p)ass!, rap, She Didn't Get It From Her Mama, underrated jams

"Don't like the cards you was dealt, no givin' 'em back"


Grand mission statement to open OMB Peezy's debut album, eh? What a pity the LP takes a Sum 41 nosedive in quality after it. Granted, a couple of Loyalty Over Love's issues are personal gripes (he wants to be the new Kevin Gates; I want him to be the old Boosie with a soupcon of NorCal mobbishness), but the album's more general problems are genuine failings: gratuitous Auto-Tune smoothing out all Peezy's pan-regional rough edges, not enough trademark Sick Wid It slap in the production, and none of his best songs are present. How you gonna call your album Loyalty Over Love and then not even put the title track on there?


In hindsight, it was obvious Peezy's album would turn out be a bodge-job from the moment Lay Down and When I Was Down were remixed for their official release on 300 Entertainment. Overkill Peezy? More like awful A&Ring killed Peezy amirite.
Posted by Kelvin Mack10zie at 18:41 5 comments:

Email ThisBlogThis!Share to TwitterShare to FacebookShare to Pinterest
Labels: alabama, Pass The Peez, rap, Sacramento, why you wanna do that luv huh?

I wear my stunna shades all life

Things that make you go "hmmmmm": Fabo was the only member of D4L who wasn't wearing sunglasses on the cover of their album, yet he's never been seen without his trademark shades ever since. 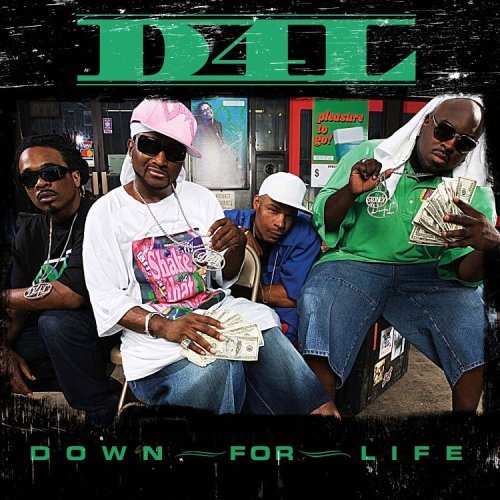 Remember when Fabo tried to bring Romo to the ghetto by doing a song over Yazoo's Situation? Bet Simon Price never played that one at Stay Beautiful.
Posted by Kelvin Mack10zie at 17:08 1 comment:

Email ThisBlogThis!Share to TwitterShare to FacebookShare to Pinterest
Labels: Atlanta, Martorial elegance, one 4 the Britz, rap

Halleluhwah! Some anonymous soul came through my comments with the MP3 of that new Edan song with the CAN sample that you had to be a streetwear influencer on Instagram to cop the 7" of. I'm So Green no more.
Internet democracy - 1, raer vinylz kulcha - 0.


Lacking in the humour of my favourite Edan songs, Real Bad Promo gets away with it because it's kinda like what might have happened if Rakim had recorded a song for Top Shelf 8/8/88.

"The one, the only
Never smokin' any stogie
Funny like Yogie, and in golf I hit a bogey"


Late pass on this highlight of Pete Rock & C.L Smooth's Basement Demos EP, a record ya host had no idea existed until The Lads© put me onto it earlier this week. Very different tone to All Souled Out here - none of Pete's trademark horn samples, and it's like C.L nicked a page from Grand Puba's notepad when Pubes was ghostwriting for Pete.

"Love all the cuties with big round booties/but if they pass gas I cross my fingers 'cause you're cooties."
Posted by Kelvin Mack10zie at 11:46 3 comments:

Another lo-fi late 80's demo proving Mac Dre had that magical X Factor™ before he ever appeared on wax.
Apparently: Mac Dre & DJ Cee's last demo tape with Studio Ton which The MAC then passed onto Khayree.
Definitely: eight minutes of Dre gabbin' game over Whodini's Friends as Cee cuts up The J.B's The Grunt.
Possibly: year zero for Oakland rappers goin' in over classic Larry Smith productions?


If this shit occasionally sounds like a dummy run for Da Gift To Gab (various lyrics here later resurfaced on there, which explains why Dre said he was 19 years old on that song when he would have been in his early 20s by 1991), then it also doubles as a graveyard for so many people involved in its making: Mac Dre, DJ Cee, The MAC, Larry Smith, and various members of The J.B's. Life's a bitch and Benny Blanco is tryna put a ring on her?