Shiest Bubz is out for David Drake's blood!

Apparently Shiest Bubz didn't take too kindly to me calling him the lowliest of Dipset weed carriers on the Purple City Byrdgang entry to our 25 Greatest Harlem Rap Songs list yesterday because he's already stalking Deezy D on Instagram and leaving him threats:

Ayo Dave, bloggas get shot everyday, b - you be aiight... you tough, right? On the real, though, if the Complex office gets bumrushed by disgruntled 2003 - 2006 era Dipset Z-listers on some "THE WHOLE BYRDGANG'S IN HERE LIKE KRISTEN PFAFF WAS HERE!" type shit today, then pray that Drake makes his rims do the Macarena outta there before Un Kasa gets a hold of him.
Posted by Kelvin Mack10zie at 16:28 4 comments:

Email ThisBlogThis!Share to TwitterShare to FacebookShare to Pinterest
Labels: I deeeed dat, Lookin' all Harlemish shoe game marvelous, rap, why you wanna do that luv huh? 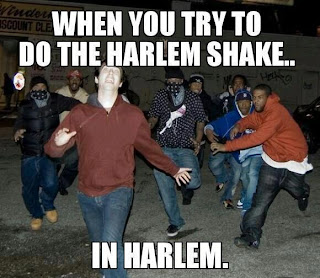 A couple of weeks back the Rap Game Sophie Lancaster Foundation right chea and David Drake were debating what the apogee of Posta Boy's career was; I argued the 106 & Park battle against a pre-Dipset Hell Rell that Max B & French Montana used to clown Ruger Rell on WSHH.com is his greatest achievement, whilst David insisted Jurassic Harlem is a lost masterpiece which might just be better than anything on Illmatic. We went back and forth for all of 3 minutes before I had a EUREKA! moment : let's pitch a 25 Greatest Harlem Rap Songs list to Complex instead. Did Jurassic Harlem make the final cut? Could I talk Complex into letting me sneak 40th Boys by A-Mafia & 40 Cal into a list of definitive Uptown classics? Find out HERE!

It pains me that we couldn't quite find room for classics like We Are Known As Emcees by Crash Crew, When You're Standing On The Top by Super 3, or I Need A Girl Part 2 by Diddy & Loon et al when editorial policy dictated we include A$AP Rocky's one semi-aiight song. Similarly, I'm still heartbroken that my pleas for Everyday remix by G-Dep, Harlem World's Cali Chronic, and Sober by Jae Millz as the list's token sleeper choices all fell on deaf ears.

Thankfully, the final list doesn't look like it was chosen by a Rap Radar intern, and getting Dr. Jeckyll & Mr Hyde, Pretty Tone Capone, and jokes about Un Kasa being the least-threatening looking thug-Rapper ever into a Complex list is a victory for ya boy, even if I was forbidden from calling Max B's lawyer Gerald Saluti an idiot-savant whigga and mentioning that the RNT marketing okie-doke is a much more interesting story than Rocky himself. Anyhoo, let's use this post as an opportunity to tell David he done fucked up in ranking We Fly High over Dipset Anthem.
Posted by Kelvin Mack10zie at 16:34 10 comments:

Being a rap nerd isn't always so simple (and plain)

I'm interpreting this as Noz simply asking whether Lay-Lo ever recorded an album together, because I don't want to consider the possibility that dude just had an Tom Breihan on 3 Kings type M.C UGK moment by somehow thinking that Lay-Lo was a solo artist, especially since the duo included a Baton Rogue A-lister like Max Minelli who I'm sure Noz is fairly familiar with as to be able to recognize his voice on Balls And My Word and the old Concentration Camp compilations. Say it ain't so????? (*1)

If I can add my tuppence worth here after ANU pointed you in the direction of Simple And Plain, be prepared to be disappointed by the sequel to Better Than The Last Time on there and skip straight to Take It Like A Gee and Simple And Plain.

(*1 : to be fair, the old Concentration Camp albums can get hella confusing with the Laylow/Lay-Lo distinction and Young Bleed's own barely-known weed carriers Lee Tyme and Lucky Knuckles all crammed onto a single posse-track with the core members.)
Posted by Kelvin Mack10zie at 09:48 4 comments:

Brief thoughts on the Cocaine Riot 3 mixtape by Chinx Drugz

As a long standing weed-carrier's weed-carrier who went from polishing Stack Bundles' rhinestone skull belts to ironing French Montana's keffiyehs, Chinx Drugz finally turned professional last year with the release of Cocaine Riot 2. It was a surprisingly great mixtape which saw him finding his voice as a new Big Noyd for the post-Dipset NYC, where it's perfectly acceptable for one of its sons to interpolate Juvenile alongside more traditional fare like Royal Flush and LL Cool J. It also included the best use of the Owner Of A Lonely Heart drumbreak in years.

Unfortunately, he's abandoned everything that made instalment # 2 so good to walk the familiar path of a breakout weed-carrier mixtape Rapper following up a great hometown hero 'tape with a middlebrow national BLOCKBUSTER disaster featuring all the usual cliched guest-spot suspects (Juicy J, Rick Ross, Diddy, Ace Hood, Yo Gotti and even fucking DJ Khaled) over tepid regionally ambiguous beats including a godawful track featuring Lil' Durk which is almost as embarrassing as that time his near-30 year old boss shamelessly indulged in Chief Keef karaoke. None of this would be the end of the world if he'd thrown in a handful of joints which built upon the style he was beginning to nail on Coke Boy Wave and Pressure On My Head, but the tracks in that vein here all fall flat on their arse and the one song worth saving sees him linking up with Harry Fraud to retread ground they've already conquered a couple of years ago with a Superlight-lite.

In summary, this 'tape sucks and it's probably more dignified to be avoiding bum-rape in prison like Max B than it is to be a working New York Rapper in 2013. None of these guys should be allowed to record more than 4 songs per calender year from this point forward.
Posted by Kelvin Mack10zie at 13:10 3 comments: 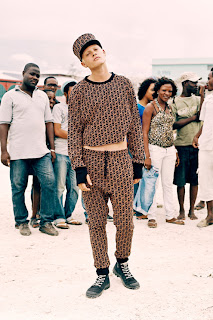 This picture up top from the ASGER JUEL LARSEN 2013 S/S lookbook got dat Best of The Martorialist (So Far) Volume # 1 cover swag on a bajillion, huh? 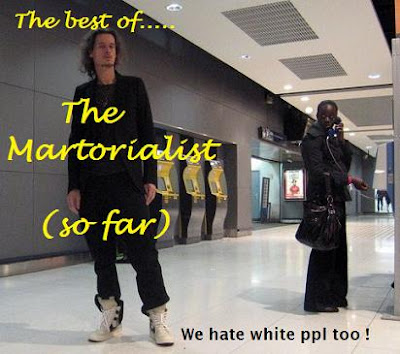 Oh ok, so this is where some of those rhymes from that recent N.O.R.E Hot 97 freestyle ccme from, which means that Tragedy pro'lly ghost-wrote them for him?


Much prefer this to that recent joint with Large Professor which was a bit too self-consciously retro for my liking. SMH @ Rappers fetishizing imaginary animals like unicorns on some Gentle Jones type shit, though, when they could be paying homage to actual IRL animals which look like they were created by Disney like Seahorses : 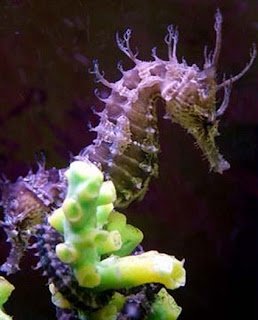 LOOK AT MY FACE IT'S NOT A GAME!

1. The upskirt twerk solo as the Pure Pimp video draws to its conclusion.

2. The way he belly-laughs after finishing his verse on No Doubt by saying "I hope my name taste like dookie in your mouth!"

3. The immortal "what, cadillacs ain't gonna roll no mo' 'cause yo' ass gone, bitch?" boast during his fire 'n' brimstone closing monologue on Allergic To Bullshit.

4. The electro funk drum-breakdown in Don't No Suckas Live Here.

5. The crystalization of the Suga Free ethos that is his "'cause love ain't nuthin' but 2 people feelin' sorry for each other and then hittin' divorce court to pay child support to your baby's mother" lyric on I'd Rather Give You My Bitch.

6. His impression of a girl with a lollipop stuck to her tongue on Still Rather Give U My Bitch.

7. His mannerisms as he's trying to work out how old he is in dog years in the On My Way video.

8. The "killin' me" repeated rhyme-scheme on Why U Bullshittin'?

9. The way he manages to better Marvin Gaye's entire Here, My Dear album with his opening stanza of "You spent your whole life lookin' for her, that's cool/you spent the rest of your life tryna keep her, huh fool?" on She Get What She Pay Foe.

10. His eyes as he asks DJ Quik about eating chicken veins during the profound opening prelude of the Nobody video.
Posted by Kelvin Mack10zie at 12:38 7 comments:

Incontestable proof that black and Puerto-Rican ppl were the only ethnicities who could wear Dapper Dan gear and not look absolutely fucking ridiculous, as well as the obvious precursor to Datta Phuge and his solid gold t-shirt???? 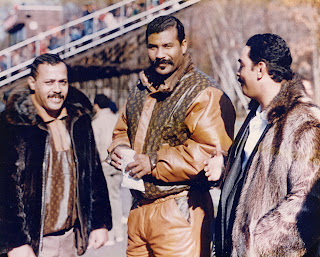 Truly yours,
The guy who always thought P. Miller's "Fool, I'm the kind to want a gold and platinum tank" boast on the clean version of Make Em Say Ugh was always way more impressive than his "N*gga, I'm the kind to want a motherfuckin' tank" claim on the explicit Ghetto D album version.
Posted by Kelvin Mack10zie at 14:52 1 comment: