Obligatory wrap-up post of those songs I've played most during the month of next level YouTube recommendations on Willie D's VladTV interviews. Much like love, the algorithm's gonna getcha.

Other notables: Martorialist readers who dig the Kokane songs above might also enjoy Dru Down's Ring Ding Dong; ShooterGang Kony's Charlie is the best song I've heard by him; sad to say that the only song on French Montana & Max B's Coke Wave 4 to come close to capturing the spirit of the original 'tape is French's Treat 'Em Right beatjack.

Bonus beats: it's no lie that my 2010s golden oldies playlist of Rap songs from decade's past that have properly seen the light of day in the past 10 years is the best playlist of July.
Posted by Kelvin Mack10zie at 18:09 13 comments:

I bang Kok' in Bangkok!


Seems like there's a new Kokane single on the Siccness mainpage every time ya boy's checked the site these past few months. At least, that's what I was told - last thing I remember I'd fallin' down a K' Hole. Anyhoobangin', Funkin' It Up is the best o' the bunch: some Robo Booty Affair squelch from the big Cadi' 'Kane himself.

You know what, I might prefer this one. Proper Atomic Frog zone Kokane:

Email ThisBlogThis!Share to TwitterShare to FacebookShare to Pinterest
Labels: L.A, underrated jams, You 50 And You Still Rappin'-core

2. It's important to remember that Beat Box and Moments In Love were both on the same 7" single initially. Top 5 double-header single of the 80s or wot?

3. Beat Box is one of those weird 80's British art-pop club records which got adopted by American Hip Hop kulcha. If we were to map out a timeline of this phenomenon then it began with Malcolm McLaren's Buffalo Gals in 1982 and peaked in 1987 with Coldcut's Paid In Full remix.

4. It's kinda ironic then that Moments In Love has long since surpassed Beat Box as the Art Of Noise track most sampled by Rap producers, and is now considered the group's song ne plus ultra.

5. There's almost as many mixes/edits of Beat Box and Moments In Love as there are of 808 State's Pacific. The two video mixes in this post are the definitive ones, IMHO.

6. Yo Art Of Noise, I'm happy for you and Imma let you finish, but the Blues Brothers and the Spy Hunter arcade game had the best Peter Gunn cover versions of the 80s.
Posted by Kelvin Mack10zie at 19:59 9 comments:

"I'm good wherever I go, and I got a right hand like Ivan Drago
And if the hands don't work that's what the glock fo'
Ain't no lackin' in Chicago"


Fave song on the new Mic Terror EP. Some midwesternplayalisticadillacmuzik with a tinge of sangin' Devin The Dude sauciness. That "Terror-slide" bridge from 3:30 to 4:14 got me open like SPAR on Xmas day. And in a similar albeit more introspective vein there's also this song:

Mic Terror - Amibitionz To Get Higher
(From Green Summer EP; 2019)


Speaking of whom, I just noticed that a properly mastered version of Mic's Juke Them Hoes is finally available on retail/streaming. A personal classic, a MySpace-era anthem, and a Chicago banger that shoulda been as big as Dude 'n Nem's Watch My Feet.
Posted by Kelvin Mack10zie at 20:26 6 comments:

Email ThisBlogThis!Share to TwitterShare to FacebookShare to Pinterest
Labels: chicago, How you dumb with a smartphone?, underrated jams

"She got me thinkin' love, I think it's voodoo
She got me in command like a poodle
Soft like baby doodoo
Chicken flipped my noodle"


Some butta 90s Harlem shit you can eat up like a strudel, produced by former Bwistolian whisper-wap affiliate DJ Milo. File this under ‘Zhigge if they rebranded themselves as Uptown's answer to The Pharcyde’ or ‘a bohemian Sporty Thievz if they'd been sobered by the delirium of lurve’.

Ultimately, it's this dance routine wot sold Duke Deuce's Yeh to me. Well, that and the fact that you can bump it with BlocBoy JB's Mercedes and House Party if you're in the mood for a trifecta of 2019 Memphis dance energy (no Normski.)


Spotted via Pink Chardonnay.
Posted by Kelvin Mack10zie at 17:08 7 comments:

Good gracious, the amount of unreleased/rare demo tape Rap from decade's past that's become proper public domain over the past 10 years is bodacious. Here's a playlist of favourites that are essential to me & the rest of my heathens. Broke the standard 1 Song Per Artist rule for Mac Dre because his tracks come from different decades and couldn't be more different.


19 songs here so pick me a 20th. Only rules are it must have leaked post-2009, it must not be by an artist already in the playlist, and it absolutely must not feature rhyming by Drake or Das Rapists.


Man, this bodies the other SAULT songs I've seen folks posting. If ESG recorded a song to be played in the Manhattan Vampire's night club from What We Do In Shadows it'd probably sound like Foot On Necks.
Posted by Kelvin Mack10zie at 00:08 5 comments:

Forgive Minnesota's Lucky Rosenbloom, Father. He knew not that the B-side of his only single is some Electro-Gospel TR-808 shit which sounds like the rawest early Chicago House song Trax Records never dropped. Less Master C & J, more Master J.C.


Hat tip to Jed for the head's up on this one. Even bigger hat tip to Freddy Fresh for the upload.
Posted by Kelvin Mack10zie at 19:10 6 comments:

Toto, I have a feeling we're not on Ramsey Street anymore... 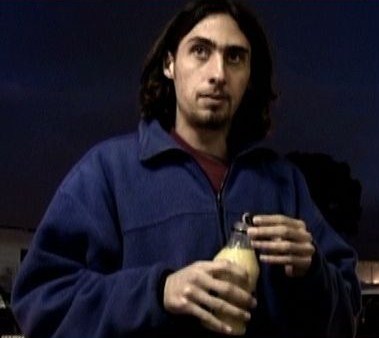 Question: what do you get if you cross Style Wars and In Bed With Chris Needham? Answer: the 2005 documentary about Australian graffiti writer/Bogan extraordinaire/rebel without plausible deniability Justin "Jisoe" Hughes. Who dat? Essentially, Jisoe is Slobbie Unkut: a bizarro world Robbie Unkut who loves graffiti and buges rather than Godfather Don and blogs.


While Jisoe is an archetypal Aussie outlaw who fancies himself as the Ned Kelly of Melbourne's Hip Hop underbelly, the reality is that he's more of a Toadfish Rebecchi in stolen POLO. Filmed over the space of a year in the early 2000s, the documentary catches Jisoe at a crucial juncture in life: living as a petty criminal and reigning as the All City king of Melbourne, but grappling with adult responsibilities as his long-suffering girlfriend Sal gives birth to their babby. You don't need to have dabbled in graffiti as a teenager to enjoy Jisoe, because it's bigger than one of the four dubious elementz of Hip Hop: this is a documentary about a dysfunctional savant struggling to adapt to the conventional pressures of polite society; in that sense, Jisoe the human being has as much in common with Maradona as he does with Dondi.

Extras mannish: Jisoe's police interview after gettin' busted for criminal damage is some of the best catchphrase-comedy you'll ever hear. Two words repeated to increasingly hilarious effect over the space of 9 minutes.


Nobody talks, everybody walks.
Posted by Kelvin Mack10zie at 21:04 15 comments:


Juiceboxxx is out here making Rock music for doz of us who got bored of new Rock music in the early noughties but can't just listen to old Undertones and Sum 41 records forever ever. Tell Lil' Kim to put the cake soap down and put the lighters up again because Coinstar Song is an anthem wot taps into summat universal: metaphorically speaking, we're all at the Coinstar tonight tryna turn that loose change into a lump sum.
Posted by Kelvin Mack10zie at 10:17 4 comments: