You've gotta hand it to Thrash Metal fans because they're absolutely peerless at being the focal point of documentaries which capture the full horror of suburban adolescence. Gwarizm favourite Dream Deceivers chronicles the story of Nevada's James Vance who attempted suicide with a shotgun after hearing decoded messages in Judas Priest lyrics, survived, had his head seemingly reconstructed with plasticine, and then tried to sue the band. But Blue Cheer can suck a big fat dick because Britain was the de facto inventor of this Heavy Metal shit, so we see America's James Vance and raise you one with Chris Needham: 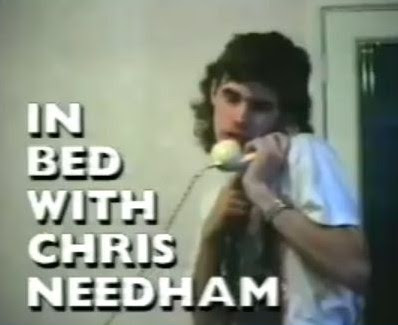 With a mushroom-mullet which looks aerodynamically impossible, and the same strain of bumfluff moustache Ice Cube had in the N.W.A days, Chris roams provincial Loughborough sneering at teenage girls who like "chart music", complaining about capitalism as he chows down in Wimpy, and taking fishing trips to toxic brown canals. The rest of his time is spent South of Heaven back in his Kerrang poster-covered bedroom where he delivers sermons about "you vegetarians", "you greens" and "you old bastards" to the camera as he sits slumped on the floor in his underpants, or lies half-naked in bed under a Manchester United duvet with his cocaine-white pigeon chest gleaming through the video pixelated dinginess of his darkened dungeon.

Where In Bed With Chris Needham trumps Dream Deceivers is that its horrificness is all too relatable. Nobody reading this post has ever blown their own head apart with a shotgun due supposed subliminal messages in a Judas Priest song, but we've all felt the sheer discomfort which hangs in the air when Chris and his monosyllabic girlfriend Jane sit uncomfortably together on his Altar of Sacrifice exchanging Christmas gifts in one of TV's best depictions of the awkwardness of teenage romance. 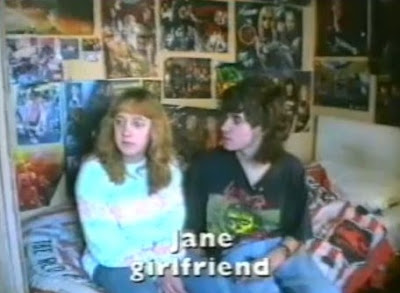 Whether you're versed in the minutiae of Thrash Metal or familiar with the specifics of U.K geography is immaterial in this instance - In Bed With Chris Needham is one of the definitive documentaries about the grotty Gung-Ho tragedy of male pubescence and the most unintentionally hilarious 50 minutes of television you'll ever behold. 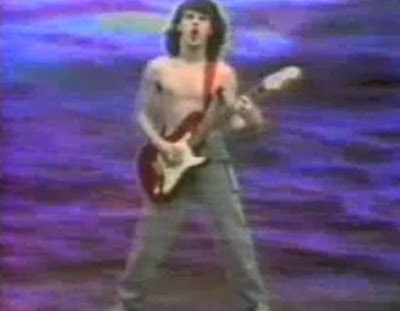 going to have to check this. It looks like the sort of thing Bob Mills wouldve had a field day with on In Bed With MeDinner

heard of the legendary chris needham but never actually saw the show.

The best documentary ever.

I listen to a lot of metal and hardcore, but don't really talk about it because I don't want to end up with a frumpy girlfriend that looks like Jane.

It really sucks that Metal chicks look closer to Chuck Biscuits than they do the the chicks from Danzig's Twist Of Cain video.