I'm the stem, you the crack; I'm the clip, you the gat; I'm the glock, you the mack; I'm the artist, you the track; I'm the pen, you the pad; I'm the dutch, you the bag; I'm the knife, you the stab; I'm the driver, you the jag; you're one of my favourite rappers currently and OMG it's like you made your latest mixtape especially for me : 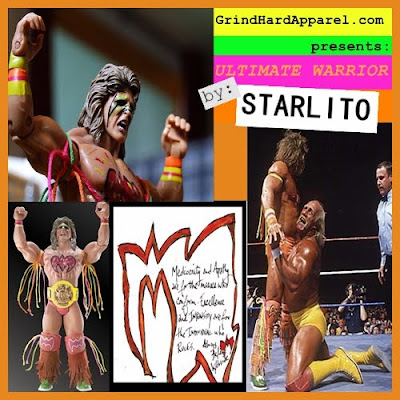 It is, as the ancient proverb tells us, the thought that counts so I don't even care that the only song on the 'tape I'm really digging currently is #UW, which is vaguelly reminiscent of one of those rain-themed Emo-Rap joints by the Mob Figaz with its wistful tinkling of the ivories and weary tone :

The song with Yo Gotti is pretty good too.

It's alright, but it was on the last Gotti mixtape and it's not even the best song with $tarlito on there (Who On It.)

Lovin' how the Ultimate Warrior figure looks more like Bowie circa Ziggy Stardust than it does the Warrior.