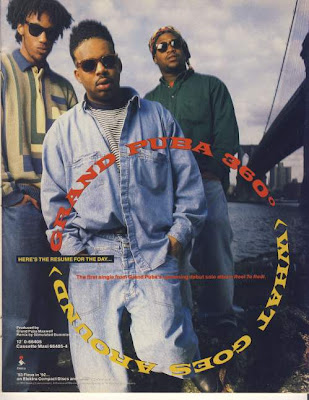 Sincere, the godz were in here when Traffic reissued a remastered and expanded version of Grand Puba's sophomore long player 2000 a couple of years back, but a deluxe edition of Reel To Reel would have been far more preferable since it's the better album and the singles from it were brimming with 12"-only cuts. Of course, there were the customary superfluous Stimmulated Dummies remixes that make you wonder how Dante Ross & John Gamble ever scored any non-throwaway 12" remix production work*, but there were also 3 gems in the non-LP exclusive Mind Your Business where Pubes indulges in a little self-mythologising before instructing da h8erz on his block to keep their noses up out his biiiiizzneeezzz, the superior video mix of Check It Out with the same Idris Muhammad sample later made famous by Big Booty Hoes (+ a Kwest Tha Madd Ladd song) and T-Ray's stonkin' remix of Ya Know How It Goes which transformed a 6/10 album cut into a 9/10 secrete classic. Listen on, black/white/yellow man, listen on :

A while back David SoManyShrimp wrote about how Rap is an artform which attracts dudes who aren't good looking or athletic enough to be traditional Alpha Males but who still think of themselves as Rick "The Model" Martel, and never has this theory rang more true than in the case of Grand Puba : the short, chubby rapper with eyes so close together he'd often get mistaken for the Cyclops from Ulysses 31 who somehow had fellas wanting to be him and honey-dips wanting to be seen with him when he became N.Y's most dominant rapper between 1990 and 1992. Any of the self-deprecation and self-doubt evident in a similar unlikely Alpha figure/heartthrob like Biggie was not present with Puba, who was convinced he was the new improved Big Daddy Kane with classic POLO pieces replacing silk zoot suits. Raise a toast to the Rapper who gave us all hope.

* No offence, lads - you might have provided every 12" Elektra Records released between 1990 and 1995 with a bland SD50 remix and then wasted some decent beats on fucking Everlast, but the production credits state that your fingers were present on the studio dashboard alongside Puba for a couple of the mixes in this post and you were responsible for Dope On Plastic and my favourite Casual song so it's all luv, thug whiggas and all of the above.
Posted by Kelvin Mack10zie at 08:39

"...you were responsible for Dope On Plastic" - white ppl made this??? Paul C, Rick Rubin, Mike Dean and Alan are one thing but thats some revelation for me.

btw Is Mantronix saltine? I fnd it hard to believe its some awkward yakubian chump outshining the god MC Tee as hard as he did that time he strutted around with a guitar on Soul Train.

Nothing's wrong with 2000, it's just that Reel To Reel is the better album and has superior b side cuts.

Kurtis Mantronix definitely isn't a gringo - he's some half Jamaican/French-Canadian ass dude or something.

Reel to Reel shits all over 2000 from an almighty height.

Let's Go that you upped on your best of comp a while back is my doo doo.

It kills me how all the rap 12"s on Elektra in the Dante Ross era were mixed to sound like fifth-hand cassette dubs. No matter how much you EQ them, they still sound muddy.

Funny, a lot of people (myself included) when thinking about the 90s, remember SD50s with great reverence, but when you take a closer look, you're absolutely right. Some of their remixes were underwhelming and unnecessary. The worst was this one:

The biggest crime is that it appears on the album before the original mix. I remember reading somewhere that Dante kinda snuck it in, and Puba (rightfully so) wasn't pleased.

The CDs were equally murky, Matthew. The tape of Reel To Reel is still the best sounding version of the album, imo.

I'm in the minority that prefers the sunshine-less Wake Up. Yeh, the beats technically not as good but Puba just sounds better on it imo.

That muthafucka aint mine.

The SD50's dropped their best stuff on the Constipated Monkey album. Especially the last two tracks, fucking great. And some of their best beats were wasted on those two no-marks from Hard2Obtain.
The "Wake Up" remix is fucking awful, though.