Why didn't God take Yung Lean instead of A$AP Yams? 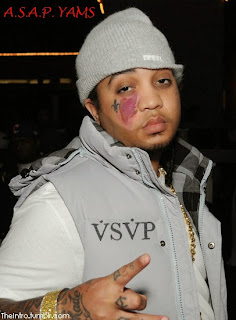 Your spirit lives on in the classic Gudda Gudda photoshop.
As someone who came up interning for two of the greats in Max B and Messy Marv, Stevie Yams deserved so much better than a neo-rap clotheshorse like A$AP Rocky and a talentless chancer like A$AP Ferg. Yet he didn't give a fuck what any of us thought 'cause he was gettin' money AND pussy like Rico, and he was such a convincing public face for the A$AP brand that he somehow managed to convince a entire generation that the group were Houston rap mavens despite the fact that A$AP Ferg is oblivious to the existence of Z-Ro.

Yams was a marketing genius as proven by the results he got out of such mediocre rappers and the trail of copycat Tumblr-blogger failed A&R bums trying to push the likes of Kitty Pryde and Khalil Nova in the wake of his RNT okie doke working, but I liked him best when he was cracking jokes about Eskay being an "outta pocket Bun B lookin' hoe" or finding a wife with "a pussy that smells like Visvim candles", and when he was simply posting music I'd never heard before. Here's my ten favourite songs as discovered via ChoppasOnDeck, RealN*ggaTumblr, and Yamborghini:

He makes an important point.

Ah, the days before Kevin Powell retired Soderberg from the rap internet.

His comp of all the original versions of Pac songs was incredible.

Really saddened by this, he was a huge presence as a blogger and his writing + his appearance on disrespectful radio convinced me he was a safe guy too. Whatever you think of the ASAP crews music their success as masterminded by Yams was truly impressive and I'm glad that Stevie made his impact on the rap game in whatever way. 26 is ridiculously young.

This is a predictably irreverent and touching tribute Martholomew. Salute.

Way more fun than the show.

Guess that makes Rocky the chief Weed Owner over at the ASAP clubhouse now.

never understood the thing about codeine, if you're serious about downers it's a real C-list drug, real poor man's stuff...why don't rap dudes buy high quality pharmaceutical heron if they're serious about opiates instead of drinking cough medicine? prolly safer too innit

I dunno why they can't just smoke weed like rappers in the 80s and 90s.

Yeah but surely lean has produced some brilliant music? Not saying it's worth it for people to die obv but I think its given birth to some weird production/rap over the years.

They did Stevie like Dame Dash did ODB fuck dis industry.

yeah seriously bummed about this shit. Yams had SERIOUS rap knowledge. Having sipped lean a few times all I gotta say is I agree with N. Brown above: straight up garbage . Don't do it. Shit is so trendy here in the states that a pint of it goes upwards of $650 bucks sometimes.

Bloggers die everyday, b
but legends live on forever.

the idea that hard drugs like lean make for better and "weirder" music is straight up high school rumor bullshit, as the careers of wayne and keef show

I'd still back Kitty over A$AP Frog any day, no matter how many unlistenable dance/pop songs she puts out as revenge for Charli XCX cycling through her aura for a minute.

But obviously Yams will be missed.