It's often speculated that Tuff City Records could have gone toe-to-toe commercially with Tommy Boy, Profile and Def Jam in the mid to late 80s if not for some of the baffling ass-backwards business decisions Aaron Fuchs made. For example, he never gave Spoonie Gee the green light to shoot videos for any of his singles when Spoonie was Tuff City's flagship artist with the label's biggest selling 12"s in 1983's The Big Beat and The Godfather in 1987, yet Aaron was quite happy to dole out money to dogfood-eating spacko Funkmaster Wizard Wiz to film a clip for I Ain't Wid Dat in 1988 :

Okay, so the I Ain't Wid Dat promo appears to have a budget of $2 and a bag of milk bottle tops, but that's not the point when Spoonie was Rap's most consistent singles artist from 1979 - 1987 as well as Aaron's main cashcow. Hell, he's still bringing in the bacon for Tuff City today via the royalties amassed by Moby sampling Love Rap and the licencing loot brought in by The Godfather being featured in GTA : San Andreas, yet the closest poor Spoonie ever came to a sniff of being affored a video was this performance of The Big Beat on some NY cable TV show in 1983 :

It's good see that the phenomenon of white girls clapping offbeat to Rap on TV wasn't just confined to Top Of The Pops in the 80s, and it almost feels like the ostentatious spirit of James Brown's Future Shock is being channelled by homie in the audience wearing the civil war soldier's cap; leave a brother with a hot hat, frontin' like Spoonie ain't got tracks? *Brother stop that! 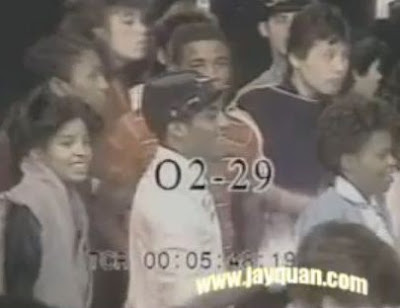 One of these days someone needs to get organezized and point out the similarities between the production on The Big Beat and Run Dmc's Sucker MC's, which I'm fairly certain came out after the Spoonie cut. I'm not saying Larry Smith and Orange Krush blatantly swagger-jacked Pumpkin, buuuuuuuttttttt....
Posted by Kelvin Mack10zie at 16:15

Yeh, I seen that Wiz video a while back. My dude gets a lifetime pass from me for making a anti-crack song then flipping it to an anti-crack one when people werent feeling it anymore, though. Pretty sure every rapper who made anti-crack joints at some stage smoked a crack joint, I was especially surprised to find out Brand Nubian used to indulge there recently. Bar KRS, whos crack in human form, made flesh personified.

That blogpost by yer man about working for Tuff City was great, really wish Fuchs hadn't got it Stalin-d.