The dog's chewed up my copy of the Bloggin' 101 handbook so I'm currently oblivious to the exact guidelines on recycling topics, but I figure I can possibly get away with another post about the Grand Royal magazine article on James Brown's Future Shock TV show on some ATLanta cable channel since the original post was from when only IRL friends, a few 'net-buddies, and the IDCIYWIW musketeers read this place, and I've now scanned said article and found more comprehensive footage of the show since then. Click the JPG for the full size : 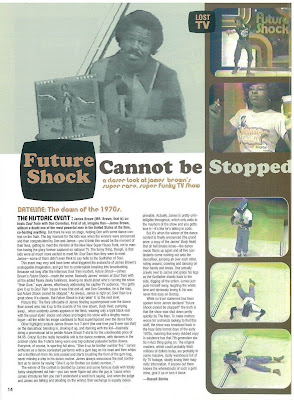 Cynics might suggest that the show was little more than a Soul Train rip-off used solely to plug releases from James Brown's record label, but I look at the Future Shock studio as a Shangri-La of Funk where even the token fat kid can Get Up Offa That Thing and hold his own in the dance contest. If the scan and that montage float your boat then check out the full 30 minute best of Future Shock video some dude called Eugene has stitched together from the Future Shock DVD of what little footage of the show which still exists.

Those first three issues of Grand Royal were so good (the 6 page Mulling Over The Mullet essay from issue # 2 remains one of my favourite pieces of magazine journalism ever), but it was all downhill from there on in with a Fernando Torres-like decline in quality which was concomitant with the Beasties themselves falling off after Ill Communication after they'd started flirting with Buddhism. It appears that great rap groups whose epithets begin with Bea and religion just aren't capable of mingling with one another because the downfall of The Beatnuts began when JuJu converted to Islam and cut back on the "... smashin' your teeth, fuckin' your wife, robbin' you, n*gga, kidnapping your niece, bless your cheek with a permanent crease, I'm a problem you don't need, you'll probably go run for police" talk.

James and the gang on Soul Train in 1973 with an awesome medley of Get On The Good Foot, Soul Power and Make It Funky :

Wasn't it Fashion who converted to Islam, adopting the moniker Al-Tariq and admonishing his former group members for their licentious ways in the liner notes to his solo album?

It was, but he managed to talk JuJu into converting too around 2002-ish.

Which was totally hypocritical of Al, because while he was up in JuJu's ear extolling the virtues of Islam he was dropping joints like Black Nasty Muthafucka and some of the trifer Missin' Linx cuts.

Nuts were way better without Al, he didnt have half their charisma imo. I never really got the muslim shit either, he didnt seem especially godbody on his solo album or features.

No 1 on my youtube wantslist is that clip of James just dancin for like 4 minutes straight on some 70s european telly show, havenet been able to find it since i saw it once years ago.

The swirl-and-duck syncopation of the 2 trumpet players in the breadowns on Soul Power in the Soul Train vid is almost as impressive as some of James' moves. I ain't never see Roy Castle bustin' moves like that on Record Breakers.

Man theres a heap of untapped talent in the Soul Train Lines too. Favourites the one where they get down to Get Down.


Outfits too, theres fodder for 10 martorial elegance posts off one clip alone.

Dude in the lime green kecks and the Busy Bee in Wild Style check blazer is murkin' shit.

hes got nothin on my man in the suit here though: