Obligatory wrap-up post of those songs I've played most during the month when Drew Millard came off as the most likeable character in teh great ironic h*pster N.Y media mafia civil war of 2016. No shots - at least Millard knows Jackie Chain isn't "a white guy".

Other notables: Ezale deserves a dead arm from Will High for promising We Want Some and then going silent; 21 Savage's whole Chinese Jordan GBE shtick is not for me but No Heart jams; Lavish D's Where's Waldo? is 2016's most unpleasant dis record; couldn't find any keepers on the new TRILL compilation.

PS: don't sleep on my best of Kap G and best of Fam-Lay playlists or my latest Recent-ish Jams compilation.
Posted by Kelvin Mack10zie at 11:45 11 comments:

What do u do when Ezale and Nef The Pharaoh both take forever to drop their respective summer slaps and the Jimmy Wopo song you've been waitin' on has an unnecessary Sonny Digital cameo? You whip up the ultimate stopgap post in the form of a list where you identify your favorite rap song of each year from 1979 to 2015. Personal canon or just the type of parlour game one plays during another sleepless night when the country is gripped by a heatwave? Blog game Best of Both Worlds, tbh. 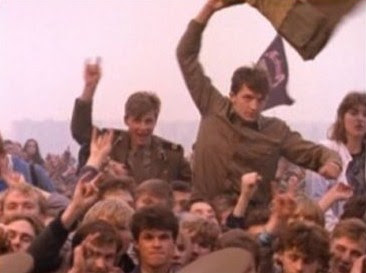 
"Even tho you lyin' in your songs, you can rap good
You can be the next Denzel, you can act good
The lil' homies catch you, they gon' smoke you like a backwood
Even yo' fans be sayin' shit that a rat would"


Ya host enjoyed Lavish D's beef with Philthy Rich as the banner on this site can attest, but this situation with Mozzy is already very unpleasant and can't possibly end well for either party. Rappers - stop the violence or, at the very least, take it back to the days of making your enemy run headfirst into a hedge.
Posted by Kelvin Mack10zie at 13:29 6 comments:

Shout outs to YouTube, the HD uncensored version of Guns N' Roses' 1988 show at The Ritz is on that bitch! Peep how Axl Rose's snakeskin jacket glistens like jizm under moonlight, and hear the G.O.A.T rawk song of the '80s free from any of MTV's annoying bleeping during its profane final third:

L.A's Streetz is talkin' and they reckon that Axl's trademark Snake Dance was just a modified Crip Walk for white ppl. The proof is in the prancing: 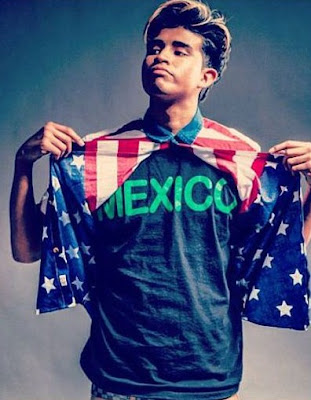 LOOK AT WHAT KAP G'S BROUGHT TO THE TABLE THESE PAST 3 YEARS: a wildly inconsistent catalogue for sure, but when he does come correct, the College Park Mexican is one of the few distinct artists in modern Atlanta rap. Here's a best of playlist from someone who's been ridin' for Kurious George Ramierez since 2013: tagless MP3s for all the song which exist no-DJ, tagged MP3s for the few song which don't. "Call Me David I'm The One To Drake" for the tagless F*ck La Policia MP3 which isn't available on any British retail/streaming service - Brexit done built a wall already?

Feel it in the air

You got me mixed-up twisted like Arabian gymnasts if you think I haven't been waitin' on this song. Finally drops later this week apparently.
Posted by Kelvin Mack10zie at 19:35 5 comments:

Rap songs that aren't on YouTube but really should be # 17

"Might post her on the street 'cause I'm colder than Polish feet
You can you say you sorta like The Jack' but you know you weak
You.. couldn't move like me in ya deepest sleep"

The Jacka - Rule The World
(From AP.9 Presents: The Mob Movement compilation; 2007)


Short & not-so-sweet Jacka deep cut from the same AP.9 compilation Aspen originally appeared on. In a perfect world where rappers don't leave key songs off their own albums, Rule The World woulda been the regal intro track on Tear Gas with Aspen following it as the opening song proper.

BTW, Russian Ray just turnt my 2010 - 2015 NorCal Slap Files playlist into a RAR file. I'm not a rap blogga, I just post everything I like; Ray be right with me, zippin' up everything I write. It's the life, it's not a fairytale; she got a narrow tail like Natalie Gal.
Posted by Kelvin Mack10zie at 12:16 2 comments:

"And it lookin' like a Smurf
And my hair lookin' like I surf
I been real since, like, birth
When the Vato pull up you hear that *BRR BRRR* that chirp"


So calebo ondulado. Here at The Martorialist we do GAF about the Houston Latino X Kap G connection goin' on this summer. Viva La Vatos!

After decades of speculation about whether Simon Reynolds views the voices of ethnic minorities in rap music as a surface noise to be endured rather than enjoyed, his Wire magazine review of KanYe West's last album finally confirms what many of us have suspected all along: Grimey Simey™ doesn't care about blk ppl.

Whereas Reynolds would usually dismiss Rap's labyrinthine complex stories of life in AmeriKKKa as "some same old shit about bling and hoes" he tolerates for the thrill of the Mantronix/Bomb Squad/Dr. Dre/Timbaland/Mannie Fresh/Neptunes/Lil' Jon/DJ Mustard production backing it, his Life Of Pablo review finally makes it explicitly clear that he's always viewed the black voices in rap music as an undesirable sub-human nuisance he'd hate to share airspace with, let alone swap bodies with on some Castor Troy shit:

Moral of this story? As far as ex-Melody Maker scribes called Simon go, even Pricey has less #problematic views about ethnic minorities than Grimey Simey™. 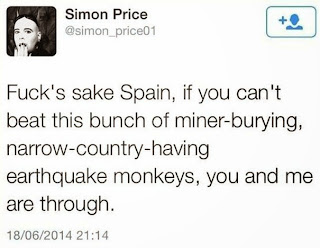 If you were a teacher's pet in junior school who went on to get bullied in high school then chances are you became a pig as an adult. F*ck all bizzies except Officer Crabtree from 'Allo 'Allo and the blonde bird from Reno 911. 22 great rap songs which are none too complimentary about the rozzers:


With or without his trademark porch, Yung Cat is quietly blooming into Kansas City's first and foremost exponent of Husalah-wave. Call him Cat because his town's fulla rats.
Posted by Kelvin Mack10zie at 22:05 3 comments:

Upped my best of Fam-Lay compilation to the 'mack because I'm tryna get ya browser Skrung Owt in 2016. You either lyin' or you deaf as Foxy Brown if you claim this isn't a top five Martorialist playlist of all time.


Personal favourite unreleased O.G version 2Pac song right here. Apparently intended for the Thug Life album and presumably mothballed because of the George Benson sample. Quite fancy the notion of it being an exclusive on the Above The Rim OST, meself - Lord knows that compilation could have done with a few more rap songs in among all those lukewarm R&B jams.

Remember when Suge Knight & Dr. Dre shelved the exclusive 1994 Dogg Pound & Nate Dogg bangeur featured in Above The Rim's obligatory club scene, probably so they could include one of those two shitty Jewell songs on the movie's OST instead? Thankfully, it turned up on the Sunset Park soundtrack 2 years later in 1996, albeit with its title switched from Mobbin' With Tha Dogg Pound to Just Doggin'.
Posted by Kelvin Mack10zie at 13:19 19 comments:

Email ThisBlogThis!Share to TwitterShare to FacebookShare to Pinterest
Labels: Favourites from the flicks, rap, underrated jams, why you wanna do that luv huh? 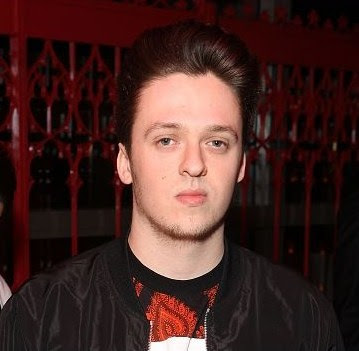 
Talk about a bassline for the waistline. Shift K3Y is really out chea overcharging the industry for what they did to Artful Dodger and Dane Bowers. Time to pay the (pied) piper.

~~~> DOWNLOAD THE COMPILATION HERE <~~~
Dreezy & Jeremih's Body is probably a tad too old and obvious by now, but I'll be damned if it hasn't blossomed into my holding summer jam of 2016. Conversely, Carolyn Rodriguez & Kap G's On The Grind is my favourite song of the moment which absolutely nobody else gives a f*ck about - where's the luv 4 Latino Rap & Bullshit songs with air-guitar potential?
Posted by Kelvin Mack10zie at 12:57 5 comments:

I'm a walkin' bomb so my young boys grenades


The unlikely scenario where the Elm Street kid from Pittsburgh drops another blamger. File this under ‘there's life in the old Get Up Offa That Thing break yet’ and ‘rap videos which abandon their sub-plot halfway through.’ Did the white kid get outta Wopo's neighbourhood in one piece or is he lost in time like the spannered penalties in the Italy/Germany game? Who knows, but Wopo is a right motormouth of a rapper with this one.
Posted by Kelvin Mack10zie at 13:28 4 comments: