We've had albums going wood, Ova Da Wudz by OutKast, the preoccupation with wood-grain steering wheels by gentlemen from Texa$ and a goofy Bay Area saltine gangsta-rapper by the name of Woodie, but the one thing rap has been sorely deficient in is wooden chains with pictures of Boosie's head glued onto them with a bit of Pritt Stick... until now : 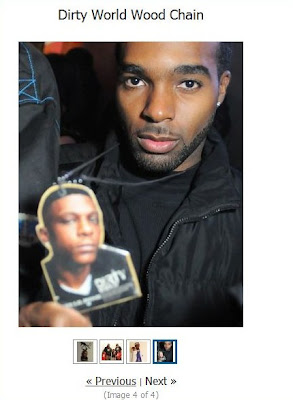 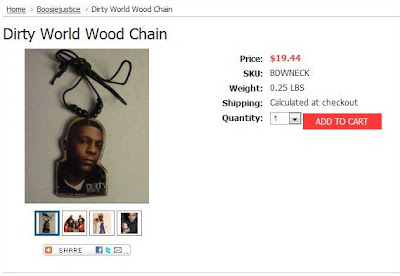 One love to whichever Boosie DVD it is where he's wearing some fake Bapestas that he refers to as his "Young Jeezys". So, we've been blessed with Boosie chains, Boosie beanies, Boosie t-shirts and Boosie hoodies, but where are the Boosie jeans with his visage screenprinted onto the arse at, and how long do we have to wait for some patent leather Boosie sneakers with his head superimposed over 2pac's face on the toebox of some deadstock Makaveli brand AF1 rip-offs?

Better than the original by that rapist 2Pac (© Fat Lace) and not just because it dispenses with the services of Danny Boy's cheesy caterwauling. Picture me rollin' in an alternate universe where all Danny Boy appearances on old Death Row joints are replaced by Nate Dogg crooning or Kurupt verses.
Posted by Kelvin Mack10zie at 14:30

Email ThisBlogThis!Share to TwitterShare to FacebookShare to Pinterest
Labels: Cover versions which are better than the original, Martorial elegance, rap

Got my fingers crossed they do international shipping.