I'd been gagging for a piece of Deep End by Jerzy Skolimowski for years, so finally getting to behold it on the big screen when the movie was awarded a brief cinema re-release last month after the relative success of Skolimowski's latest picture Essential Killing was a mildly orgasmic experience, and for it to live up to its hype as one of the most lurid films about the mania of desire you'll ever see is refreshing after similar incidents when my expectations weren't quite matched. It's out on DVD/Blu-ray next month but they've only gone and plumped for this cover when I was hoping they'd use the infamous American poster and finally remove the cumbersome RESTRICTED banner so we could savour it as originally intended : 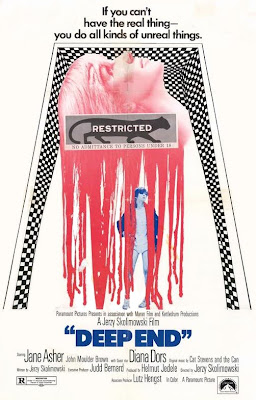 See, rap dudes - it's not just mixtape joints which suffer from obtrusive tagging but movie posters too, so I was hoping this'd be the cinematic equivalent of the time when Boosie & Webbie's classic Long Journey from the Superbad.. The Return Of Mr. Wipe Me Down mixtape turned up in CDQ minus all the DJ sound-FX on Boosie's Incarcerated album last year for its DVD release, but, alas, it's not to be, c'est la vie, c'est la vie. Hey, since your screen is currently awash with tenuous links between vintage European movies and regional gangsta-rappers with yelping voices, am I totally bugging here or does DB Tha General go in over some of the scoring from Godard's Alphaville on Upgrade 'Em 2 at 4:16 in that King Of Oakland promo movie for his new album? :

If so, I won't go as far as saying I Did That exactly, but who was it that suggested Bay Area rappers should take the unprecedented move of getting busy over classic European arthouse cinema soundtracks last summer? Oh, that's right, it was your man right chea - Mr. Aguirre, Wrath Of Blog.
Posted by Kelvin Mack10zie at 19:12

Email ThisBlogThis!Share to TwitterShare to FacebookShare to Pinterest
Labels: Favourites from the flicks, I deeeed dat, rap, you so crazy, youtube

Based God comments on the post, Based God then tells Kreayshawn some of the videos she directed were lovingly compiled, no homo, in said post, Kreayshawn tells DB about it. You deed it.

Man DB is running 2011, the videos alone are shittin on everything else right now. The crown!

I'm not sure about DB's hiding under the car to jump out and pop a dude's melon method, though. Couldn't he just hide behind a tree or break into the car and hide in the backseat instead?

Like J-Stalin I find it really hard to imagine him being a succesful criminal, they have way too much fun. In the Anybody video he acts exactly like I would if I got to run around a forest in camo with guns.

Turf Talks another one, he even admitted as much in an interview I read. Im not sure where Husalah fits in all this though.

Probably hiding out in his uncle's pantry when he was on the run.

Oh speaking of which, do you've any idea from what date Hus was on the run?

Been trying to find out for a post I'm doing and any info online I founds vague/contradictory. I think its sometime in '03 but I'm not sure.