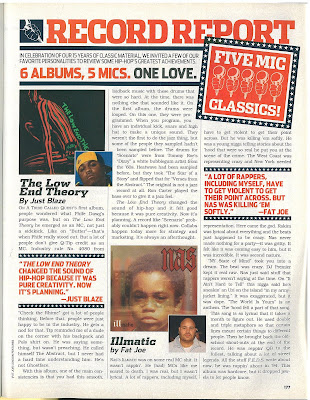 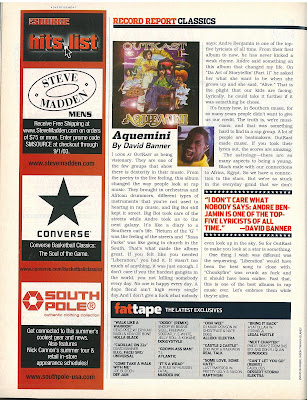 No Wicked22, but Banner should've copped the 3XLP version of Aquemini because Liberation is the closing song on there. So, you haven't gotta be blessed with Holmesian powers of deduction to notice that I've only scanned 3 of the 6 albums mentioned in the heading of the article and this is because Tigger's thoughts on Life After Death and M1 from Dead Prez explaining why AmeriKKKa's Most Wanted deserved its rating are both so annoyingly formatted over different pages with obtrusive adverts that neither are worth scanning; as for Joe Budden waxing lyrical about The Blueprint, I can only paraphrase Michael DeLuise in Encino Man : this blog wouldn't piss on either of their gums if their teeth were on fire (no Summer's gay friend in Neighbours meets Robson in Oz.)

Yogi from CRU on why Volume One is the best Jay-Z album might've been a good read, though.
Posted by Kelvin Mack10zie at 17:14

That Fat Tape on the Banner page has some great shit...and some fucking terrible shit.