If the step-by-step enchiridion to cooking crack and prosperity in the drug game of Ghetto D by the Miller brothers has taught me any sort of lesson in life, it's that patience and knowing how to fully utilise your tools at hand are the key components to achieving one's goals; thus, my long-held fantasy of being accepted into the No Limit Soldier brotherhood is finally becoming a reality thanks to this internet shit judging by these 2 posts from Lil' Romeo's Twitter account yesterday :

Essentially, Romeo linking my P Miller clothing advert post is the inverse-cyber version of Louis Theroux's "thanks a lot, whooty" response to Master P calling him whoadie as they were about to part ways in the gangsta-rap episode of Weird Weekends. I'm way better at basketball than Louis, but, much like him, I'm a 6'2 white bro with the heart required to be a soldier, whooty : 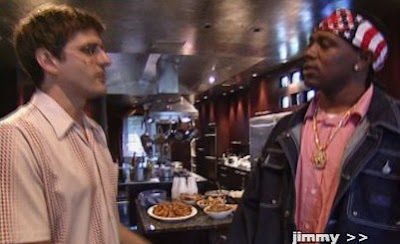 This also might be a good opportunity to touch upon that Soulja Boy racism melee on Facebook over the weekend since it was quickly lost to the rapid turnover of RSS feeds and ultimately overshadowed by the far less interesting news story about the continuing beef he and DeShawn Stevenson have with Lebron James and Jay-Z; peckerwoods tryna do you like King, B :

Word around town, he got F.O.I shooters in the pocket; word around town, bitch, he gonna hit racist ass whiteboy faggots with the rocket *KABOOM!*. J-Zone already outlined why the proposed Soulja Boy remake of Juice isn't feasible in 2011, but he can still channel the spirit of Bishop by updating that era's most vehemently anti-white ppl rap songs in the DeAndre way. Cover versions of When You See A Devil Smash Him by Lakim Shabazz, Buck Tha Devil by Da Lench Mob, Cave Bitch by Ice Cube and The Devil Made Me Do It by Paris are gonna be a necessity for this new cracka-ass-cracka hating Afrocentric chapter of Soulja Boy's continuing metamorphosis into the last 32 years of recorded rap music condensed down into human form.
Posted by Kelvin Mack10zie at 20:29

I just want to let it be known, that I was a fan of the blog before it got Romeo props.

Counting down the minutes to a Martorialist post on Noreena Hertz.

I've come to the realisation lately you may have written some of the first rapblog things I read, definitely comments anyways.

Thun too actually. Am I the only one who didnt know bout RHS?

Just hipped Solja to this on the twitter http://www.youtube.com/watch?v=Auf1xcz0KUo

Will investigate, Lil' Too$hie. I hope she's better than that Dr Alice Roberts a friend told me I should post about. Totally not feelin' her Neds Atomic Dustbin groupie in 1991 chic.

Congrats on getting the nod from Romeo. I'm still waiting for Vin Diesel to re-tweet my Take Em To The Tunnel mix...
I was wondering if the whole Afrocentricty thing would make a come back. If things go in cycles and it could be said that the last few years could be equated with the brag rap of the mid 80s then what are the chances of Africa medallions making a comeback, followed by a return to those early 90s 'devil' tracks?
ok, slim to none but if it does you heard it here first...

It's inevitable that Africa medallions are gonna come back into vogue at some point since every other look from the late 80s and early 90s has reappeared over the past 5 years.

Did I just use the phrase into vogue? No homo.

that was the most garbled comment Ive ever written I think - was posting from work and kept getting interupted. I remember seeing a few dudes rocking the Redhead Kingpin look a few years back but it seemed to die out quite quickly.Shame.

I retract my Noreena Hertz nomination.

Her politics is way too left-wing to be considered a legit fyne dyme.

Nothing worse than a chick who's all Bernard Righton.

Word life, whooty. Left-wing leanings are almost as much of a boner nullifier as motherhood is.

Lil Romeo tweeted about your blog. How does it feel to be a big shot? Also lol at the idea of Romeo googling himself on the regular.

Talks about the practicalities of the No Limit soldier philosophy n stuff.