Also from The Source's 15th year anniversary issue comes this advert for P Miller Clothing as modeled by the grand imperial Percy Miller and prince Percy Romeo Miller Jr. Damn shame their feet aren't visible 'cause you just know they were both rockin' the infamous Master P sneaker range forever immortalised in rhyme by Lloyd Banks. P's the Master, he won't let you forget, hoe - stompin' hard in silver plastic spaceshoes while your boyfriend tip-toe: 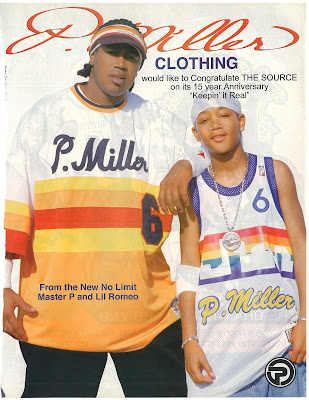 No Limit still had some jams around this period. Mac had the best verse on this C-Murder cut, but $pitta saying "whoa, whoa, whoa, hold up, man - I got $2 million cash!" with such conviction during his introduction is almost as good as C-Murder telling the C.O to "fuck the world, bitch!" during his:

Where's that "yeeahhh" that runs in a loop in the background of that Curren$y joint been used before? It's doin my swede in...

um, Covert Coup is fucking awesome. best thing Ive heard in years - Currensy fits Alc's beats perfectly. Admittedly it was the first time Id heard Currensy but since then I went and copped both Pilot Talks and Fiend's 'Tennis Shoes & Tuxedos'. Basically Im all over this Jet Life thing right now.
Im gonna go back to reading the rest of your post now...

Good question, Bozack. I've been wondering that too 'cause I can't place it.

Step, everyone seems to love Convert Coup but I'm just gonna have to sit this one out. You should check This Ain't No Mixtape if you haven't already because it's got my 3 favourite Curren$y songs on it : Elevator Musik, Scared Of Monstas and Get It Ya Self.

ive got Aint No Mixtape d/ld by havent checked it yet. Covert Coup has some of the best synergy between rapper and producer that Ive ever heard. Alchemist cam through with some real atmospheric soulful beats atht fit Currensy perfectly. It even has me wanting to start smoking weed again and I gave up 5 years ago!
If anything at least check the tracks with Fiend and Freddie Gibbs.

The one with Freddie Gibbs is the one Rob Breezy from S.H was trying to get me to listen to but I really hate Freddie Gibbs. I may give the Fiend one a toot some time, though.

Bit after the event n all that but GOT IT! It's from the Fresh Prince soundtrack.... Thank fuck for that.