A Concentration Camp compilation 4 u

In an age when even Klondike Kat probably has a videoblog, it's pretty cool how the Concentration Camp crew-era of C-Loc's career is still so under-documented online that old Amazon reviews, Youtube comment section squabbles, posts on abandoned ghostship blogs by dudes from Baton Rogue, and a Young Bleed & C-Loc interview in Murder Dog from 1998 are the most reliable sources of information about the period. That said, I wouldn't say no to a Concentration Camp Wikipedia page, a full discography of the releases on C-Loc Records (how is Boosie's first album not listed on Wiki or Discogs?) and an in-depth interview with 'Loc taking about the Camp since Baton Rogue legends like Bleed, Max Minelli and the pubescent Boosie passed through its ranks and the narrative of the crew includes fall-outs, shelved albums, and prison sentences at their peak of popularity.

In an attempt to rectify this situation I've zipped up 25 of the Camp's definitive songs in a RAR file for your enjoyment. The crew consisted of C-Loc, the group Lay-Lo (Maxminelli and J-Von), Young Bleed, Boosie when he genuinely was lil', and weed-carriers like Lee Tyme, Lucky Knuckles and Boo The Boss Playa who later became Boo Rossini, alongside their main beatsmith Nathan "Happy" Perez, who was seemingly at his most perky when knocking out ersatz versions of EA-Ski, Beats By The Pound and Mannie Fresh productions; and the criteria for the compilation here was to take songs from the albums on C-Loc's own record label with their trademark framed Pen & Pixel covers such as 1995's Who's Gonna Ride (the Whatever album slightly rejigged with a new title, cover and couple of extra songs), 1997's Concentration Camp, 1998's Ya Heard Me and Concentration Camp II : Da Holocaust, 2000's It's A Gamble, Camp III : Thug Brothas and Boosie's Youngest Of Da Camp debut album, 2001's Me And My Hustle, and 2004's Camp IV : Thugin' From The Inside.

I didn't bother including anything from Young Bleed's My Balls And My Word since it's the one Concentration Camp album that most regular rap-dudes are familiar with at this point, and there's nothing from Lay-Lo's Plain And Simple album because it wasn't released on C-Loc's label and it doesn't even use the crew's trademark Pen & Pixel framing on its cover. Enough waffle from me, it's time to take a stroll wit' the camp to see if you're ready to roll wit' the camp : 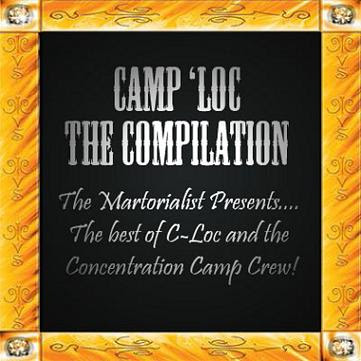 I'm imagining the whole angle of the crew calling themselves the Concentration Camp was inspired by C-Loc catching Schindler's List on TV one night, but, look, if Jerry Heller can spend a couple of pages in his autobiography complaining that his publishing company wouldn't let him title the book N*gga 4 Life because he's always been a "true n*gga" then a group of black and Hispanic rappers from Louisiana can reciprocate by identifying with the Jewish ppl imprisoned in genocidal hellholes by the Nazis during World War 2.
Posted by Kelvin Mack10zie at 12:10

I've never heard most of this,lookin forward to it. I always saw Baton Rouge kinda like a southern Vallejo, so I geuss this must be their their Sic Wid It/YBB, so many talented dudes alright.

That "true n**ga" shit clinched it, Im copping the Heller book. lol at dude in HCC saying its an accurate source of info cos "it just feels true".

Lay-Lo's Plain And Simple album is great though

I always saw Baton Rouge kinda like a southern Vallejo, so I geuss this must be their their Sic Wid It/YBB, so many talented dudes alright.

Definitely, Done, but add Richmond-era No Limit releases into the equation too because that's what C-Loc's first album reminds me most of.

This is some really great stuff.

made me wanna check max minelli's "me & my hustle"

It's a pretty essential album in the Concentration Camp catalogue, imo.

If possible, I would like to ask for one more re-up. I would love to listen to this compilation.

Thanks for re-up'ing the Best of Vol. 2 comp. You have a great site. Even reading through for a couple hours, I learned a bunch of new stuff about rap.

can you re-up this? I had this, but it seems it's on the other computer now, very far from I'm now.

can you re up this?

I can if you can suggest me an upload site.

Zippyshare is blocked in the UK now, and Dbree no longer seems to work.

Definitely. Simple and Plain and Balls and My Word are my two favorites. I still rep Lay Lo to this day. Sick ass duo

The Camp is still my favorite group of all time