Please believe this is the post where I conclusively prove that Happy Perez is one of the ten greatest Southern producers of all time and a far more important figure in the history of teh Rap music than that dead fella from Detroit who ruined The Pharcyde and A Tribe Called Quest with his boring clippity cloppity neo-soul beats. 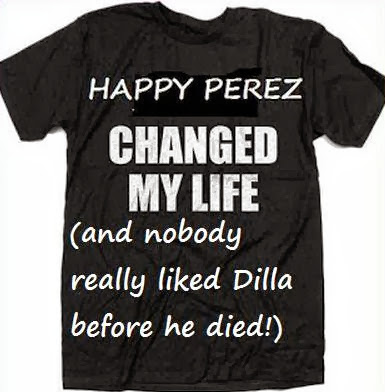 In a perfect world, I would've pitched this as a listicle to Complex on the strength of Happy Perez being the brains behind the boards for How Ya Do Dat and Miguel's Sure Thing. Alas, in reality there's no way any website would ever pay me to write a list comprising of 95% Concentration Camp deep cuts and I doubt my arsenal of crap jokes about C-Loc gettin' bummed in Angola and how Boo Da Boss Playa/Rossini looks the dead spit of either Jim Jones or A-Wax depending on which way you squint your eyes would've been able to stretch out for 30 blurbs, tbh.

So here's a generic hyperlinked list of my 30 favourite songs that Happy Perez produced in its place. It's probably best to forget that he also did a bunch of beats for South Park Mexican and even recorded 2 albums with him as the Lone Star Ridaz since it's morally unethical to listen to Rap songs by dudes who diddled kids, especially when said dudes who diddled kids were committing similarly abhorrent crimes like ganking the Happy Perez beats which could've been used for some J-Von and Lee Tyme solo cuts on the 4 Concentration Camp compilations.

Related Baton Rogue Rap news : Mouse On Tha Track has just dropped a video for Bye Bitch. If you missed the song previously, you can find an MP3 of it on my Mouse On Tha Track compilation as well as that recent DJ Dow Jones What Da Streetz Need 7 mixtape which got slept on like a motherfucker despite the fact it featured no less than 5 new Mouse songs.

Bless How Ya Do Dat's cotton socks since it was the first Happy Perez production/Concentration Camp song I ever heard, but the original solo Young Bleed version A Fool is the better song.

You're dead to me.

I'd slept on that "What Da Streets Need 7" mixtape. Good sthit.

Here's the no-DJ version of Off The Chain.

Whut I was tryna find the credits for that Baby Bash album on discogs and stumbled across this:
"he went to Houston, Texas, where he met fellow rapper South Park Mexican. Thus, he decided to re-locate there"

which could be nothing- mexican-american rap man unity etc but then remembered the Potna Deuce daterape song X-TA-C!

well another one anyways

stall I wanted a Mannie Fresh Saved My Life tee. Maybe Ill sell these instead and donate all the profit to Barnardos.

lol "gee" is slang for fanny here maybe I shouldnt

"I Couldn't C' It" was produced by Young Bleed according do Discogs...

If Discogs info is correct these are also not done by Happy Perez: Pussy Ass Niggaz, Feel Lucky, Pop It On Me, Give And Take.
After being such a pain in the ass may I still ask for a re-up of Drop Your Nuts?

If the Concentration Camp tracks are credited to C-Loc then it's probably safe to assume that Happy P ghost-produced them lol.