Secrete & rare Swag-Rap jams with choruses that sound like your computer freezing up and going haywire as you're listening to YC's Racks on Spotify. Someone could/should sample that hook because you could probably make a 2013 Murder Rap-type beat out of it. Anyhoo, props to the author of this cut if he's ever performed it live because he must have breath control like one of those Amazonian frogs that can stay underwater for weeks at a time : 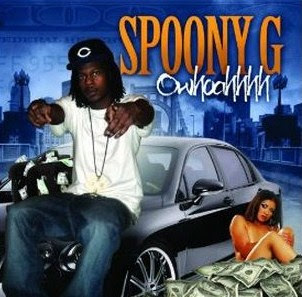 Anyone know owt about Spoony G then? He's practically un-Googleable due to his near-namesake and what scant info ya boy Fulton Mall Mackay and the homie Nyquil Made It can find tell us he's from Zone 6 and hasn't dropped anything else since aside from a couple of guest appearances. How refreshing to find a genuine one song wonder in an era where every motherfucker who drops a hot single then insists on hanging around for years on end afterwards making a nuisance of themselves by sharting out terrible mixtape after terrible mixtape.
Posted by Kelvin Mack10zie at 11:24

this songs the shit "Nyquil Made It" lol

Weirdly enough I've been on a Purple City spree this week.

Did you notice that there's a random Kevin Gates song on The Color Purple called Louisiana Pusha? Can't even imagine the backstory to how a weed-carrying for Max Minelli era Gates (he wasn't Keven yet) ended up on a 2004 Purple City mixtape.

That diskog blog is doing the Lord's work.