Dawg, you got shot in your ass, dawg! 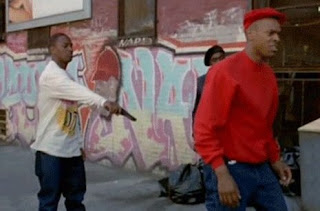 
First time I've heard a Bay Area rapper go in over a modification of I Need A Freak by Sexual Harrassment (no Das Racist) since Messy Marv's classic 2008 San Quinn dis track Talk Baseball. This here song fulfills my need for DB Tha General to deliver one great gassed-up 80s throwback jam a year, now all I want from him before december 31st is a great homicide-ballad in the vein of Murda or Don't Worry and he's good for another 12 months in my book.

What's your favourite I Need A Freak-inspired Rap song then, y'all? I tend to favour Too $hort's take on it over the couple of Mac Dre remakes. Even kinda dig that time Egyptian Lover took a stab at it in the mid 90s even though he could no longer secure the same class of video hoe as he once could in his Freak-A-Holic heyday.
Posted by Kelvin Mack10zie at 09:39

Very fonky beat. DB's delivery still stresses me out a bit too much.

Have you heard "Savage"?

Every time I hear "I feed my bitch" I can't help but think of how similar the melody of that keyboard is to the synth line on Black Eyed Peas "My Humps."

This is relevant because Fergie is on 2chainz album which is totally exciting and not the most boring album ever!