The New Style were the group formed by Treach, Vin Rock & DJ Kay Gee in 1988 before they changed their name to Naughty By Nature in 1990, and their 1989 album Independent Leaders is pretty forgettable other than Scuffin' Those Knees and its front cover where Treach busts a prison-pose, Kay Gee resembles a Big Daddy Kane back-up dancer who'd have probably gone by the name of Shagg Lover, and Vinnie sports the sort of cardigan that Fred West probably wore when trawling the streets of Gloucester looking for girls to abduct in the '70s: 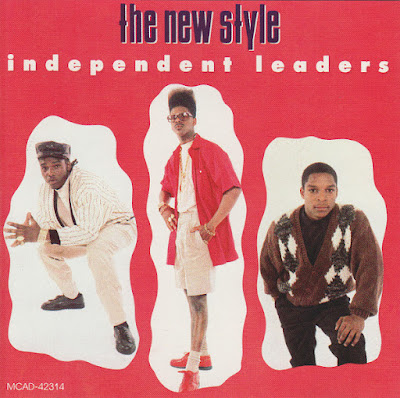 The New Style - Scuffin' Those Knees
(From Independent Leaders album; 1989)


Not sure if Kay Gee was responsible for the beat since the entire album is vaguely listed as being "produced by The New Style", but whoever put Scuffin' Those Knees together deserves credit for saving Mantronix's King Of The Beats from an eternity of being known solely as an instrumental B side cut beloved of AZN turntablists and German breakdancers.
Posted by Kelvin Mack10zie at 09:56

Do i lose all cred if i love NBN but never knew about this album?

I'm not really sure if it's well known or not at this point, tbh.

Dickhead random-rap boom-bap dinosaurs/borks think this song is better than anything NBN ever did.

I didn't know about this either.

Kicking myself for never bothering with this album, rapping on King Of The Beats is proper wish fulfillment shit.

I think it was the cover put me off, Ive way more appreciation for Treach & maybe Kay Gees outfits in 2014 though.

If only Vinnie had chosen that cardigan in a different colour he could've gone for that Dean Martin on the golfcourse in 1981 swag instead of the 70s British sex predator look.

"There are 3 basic elements essential to life: solids, liquids, and gas
But all scientists forgot about the 4th
Scratch Classic Kay Gee, what is that 4th element?
***IT'S THE NEW STYLE!!***"

Only acceptable mention of the 4 elements on a rap record, imho.

If this song is any indication, Vinnie and Treach shared equal billing during this era.