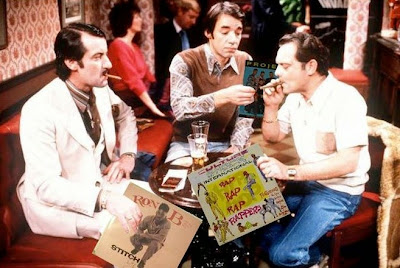 (Props to Chris.)
For anyone not keeping abreast of such matters, Chopped Herring Records have now put out two EP's worth of previously unreleased material by J.V.C. F.O.R.C.E. That's two EPs by a group who released two albums but only ever managed to make two songs of note during their career: the first being their classic single Strong Island, and the second being the title track of their 1988 LP Doin' Damage, which really should have been another single so J.V.C. F.O.R.C.E could have raked in some of that crossover loot the Fat Boys made with Louie Louie.


I thought the whole point of Joey Bada$$ and his ilk was that they existed so ageing boom-bap dinosaurs no longer had to shell out stupid money for limited edition 12"s of crappy studio scraps from third-stringer golden-era rappers?
Posted by Kelvin Mack10zie at 19:58

"Strong Island" is one of those now forgotten classics.

i like stop n listen too it's like an mf doom remix of a bad epmd song https://www.youtube.com/watch?v=uvqMu3DGpXY

"never wear pants made of parachutes"

That's not a bad description.

Tbf, at least Stop N Listen doesn't feature multiple "hey, we made Strong Island, remember us?" mentions every verse which separates it from every other song on the 2nd album.

i like a couple of other songs from the first jvc lp.

I feel like I missed out on important rap internet experiences cos I only recognize Stitch By Stitch there.

Dude this limited 12" thing is playing both sides of the fence. Chopped Herring put out stuff like this but also random Meyhem Lauren and Shaz Illyork eps. Joey Badabing never did anything with them but he's got similar shit on his own, with Dilla fetishism in the mix for extra points. http://www.discogs.com/Joey-Bada-J-Dilla-Two-Lips/release/5168118

AZ We Movin' 12" with liner notes from Thun or GTFOH.

"Tear The Show Up" was greatness though.