"These rappers finally get some fame and think they got it locked
After your album flops, n*gga, you gawna be on Koch" 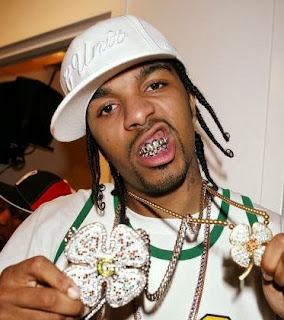 (Poor Lil' Flip. Fate really came back to bite him in the arse with that line, huh?)
Are you ready for an in-depth critical reevaluation of Koch Records yet? Nope, me neither, but if you can put your snarkiness aside for the next 20 minutes, I'll prove that Koch was a pretty great singles label in the days when singles were still physical products you could hold in your hand, and that all of our worlds would've been a considerably poorer place last decade if it weren't for the singles and deep cuts on the glut of Rap albums Koch released, not to mention the industry anecdotes about Bob Perry's shiestiness, and the hilarious altercation between Cam'Ron & 50 Cent on Hot 97 which centred around whether Koch was a graveyard for fading artists or not and if 50 could shut down Diplomats releases on the label.

Word to the Canadian Wall Street Journal! But don't take my word for it, here's a generic list of 21 great songs that were released with the Koch Records stamp on them, which I suggest we all burn onto CR-Rs or turn into some type of playlist before the night is out:

"used to run with Universal but that shit was wing/now I'm with Koch I think I'll cop everything (8 dollars ngga!)"

That said, its all very well getting $8 per unit sold provided your boss Mr Perry reports your sales figures properly and isn't shipping a couple thousand extra copies out the backdoor on the sly. #4080

Nice one! *waits patiently for someone to come through with the koch zip file*

Props on finding a good song by Haystak.

Is this the same Bob Perry who still owes me (and plenty others) various Ghostface, Rza and U God preorders from the Soul Temple bandcamp? What a crooked cunt.