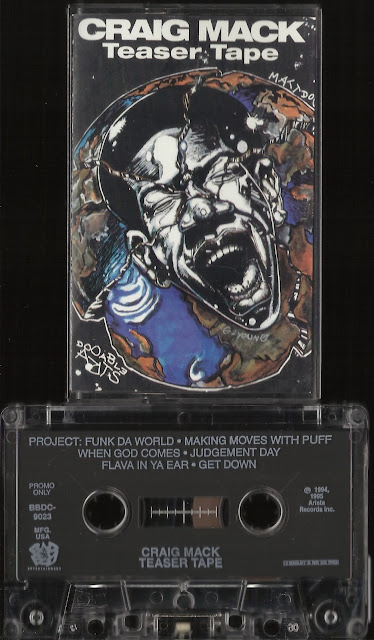 Via an infamous Bad Boy stan, here's a Craig Mack teaser tape featuring artwork by Matt Doo/Dooable Arts who was responsible for the covers of Stress: The Extinction Agenda and the wack-arse Company Flow album. Sadly, Matt killed himself in 1998, probably because a piece of his amazing artwork got used on an album with El-P rapping on it.

Puffy needn't have bothered releasing Craig Mack's album officially, because the only good songs from it were on here. Truth be told, I've always thought Mack was a good singles artist, from his debut as as MC EZ in 1988 with the Just Rhymin'/Get Retarded 12" to the Bad Boy classics (O.G version of Get Down > overrated Q-Tip remix) to Jockin' My Style from his otherwise atrocious 2nd album to his very early noughties indie 12" Brand New N*gga.
Posted by Kelvin Mack10zie at 20:58

I liked his version of Please Listen To My Demo as well. A nice nod to his days rolling with EPMD. Anything sounds good over that 'Riding High' sample though.

as far as late craig goes i liked this hard knock life knock off he did with 45 king too http://www.youtube.com/watch?v=76V3KkNJQuE

Kinda relieved I'm not the only person who dug the Wooden Horse/Please Listen To My Demo 12".

I even liked Mack Come Thru.

THIS MACK JOINT FROM THE 2ND CD WENT TOO