Ladies and goons - please open your hearts wallets and extend a warm welcome to the inevitable official Martorialist clothing line. Our first release is a 1-of-1 rap-themed t-shirt where we've worked carefully with Visvim's Hiroki Nakamura to hand script the text in secrete native American calligraphy on a Egyptian cotton t-shirt sourced from Japan and totally not just some medium Kirkland blank tee we've taken in an inch on either side because we're some Skinny Whiggas Runnin' Shit (shout out to Soulja Boy) that we wore once as an undershirt on a sweaty night out drinking and dancing to 90s R&B recently, honest! 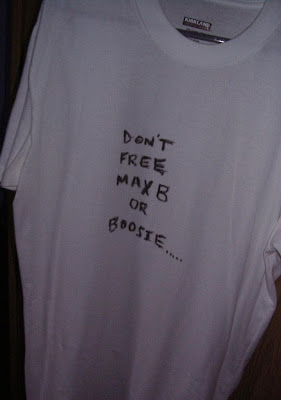 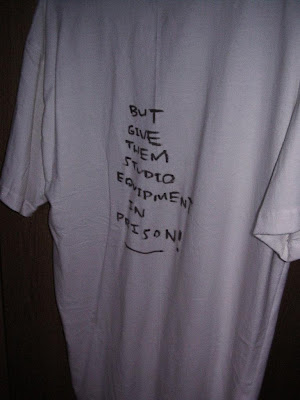 Let's not bullshit here, germs - it's entirely probably that Max B did order his ex-girlfriend's stepbrother to shoot that Miami drug dealer dude in the head, but it isn't a crime that warrants 75 years in prison since Max wasn't even in New Jersey at the time and one less coke dealer from Florida is hardly a tragedy of that puppy getting kidnapped over the weekend proportions, right? If there is an offense that Max deserves 75 years in prison for it's letting that godamn cartoon lesbian Psycho Les lookin' ass weed carrier of his rap solo on this beat on their first mixtape together :

I guess this might be a good opportunity to discuss how overrated both Coke Wave mixtapes are in contrast to just how underrated the M.O.B (Members Of Byrd Gang) Volume 1 and Public Domain 6 : Walking The Plank 'tapes are in Max's oeuvre. In Biggaveli's interview in that recent issue of XXL, Dame Grease urges anyone who stumbled onto Max with Vigilante Season to check out PD 6 as the release that best captures the primal scream of a man on the brink of oblivion :

"It's all the blues on there" Grease Says. "All blues - ‘I think I might go, but I'm here.’ It reflects what he's going through. Normal fans can listen and know this is good as shit. But avid listeners will know, Oh this n*gga is going through something."

Anyhoo, all sensible bids considered for the t-shirt, but we'd also willing to do swapsies for Juve's Soulja Rags sampler 12" or signed naked pix of Va$htie in her FREE BOOSIE beanie : 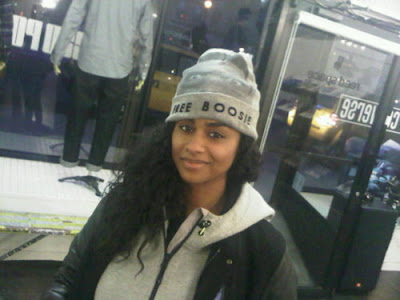 While PD6 might be better the first Coke Waves great and the perfect introduction to the silver surfer, as my mate who turned his nose up at the tunes off Vigilante Season I played him but was a full convert off of CW. Rapping over Drugs was inspired imo.

Then again I've played French's Return Of The Mac cover like twenty times already so maybe I'm not the best judge.

You DL the Library of A Legend collection?

Nah, too much Max.

French wasn't Max's weed carrier. He was already signed to Akon when they made Coke Wave, first of all. Max and French linked up because they both had the same predicament: they were both blackballed by the industry, and they both had beef with Jim Jones. So they naturally linked up.

French gave Max needed media exposure since he didn't have Byrdgang like he previously did. Although for both of them it was in the form of the regular street DVDs and the newly formed Worldstar. But better having that underground following than no following. And Max laced French up with Dame Grease, one of his main producers.