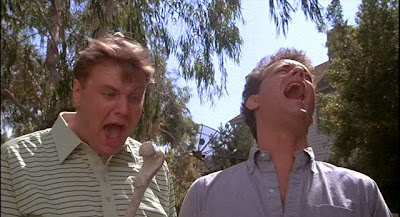 This was me the first time I heard Cardan's Feelin' It from his shelved 1999 album Hey Young World. Feelin' It is a song of contrasting fortunes for its authors, where Ma$e's former shiny suit folder from Harlem World probably still cries himself to sleep over it never coming out as his follow-up single to Jam On It, Pharrell clearly thanks his lucky stars it was never officially released so he could rework and reuse elements of the song for two of his biggest hits of the noughties: that Justin Timberlake McDonalds commercial song and Snoop's Drop It Like It's Hot.

Some pub-quiz trivia for datazz there. Main reason for this post, though, is that I recently stumbled on the no-DJ version of Cardan & Ma$e's mixtape minor classic Time Is Money. Cardan made an awfully good Ricky Butler to Ma$e's Lt. Mark Rumsfield, and Time Is Money is a quintessential proto-Jiggy Harlem deep cut from that transitional period between street favourites like American Dream and Creep, and legitimate hits like Feel So Good and Horse And Carriage.

MASE AND CARDAN'S RADIO FREESTYLES WERE FIRE TOO

Pharrell's recycling from that is lol.

Nice. I picked this up on the cheap recently..

2nd jawns a jawn, might even be as good as Sideshow.

Writing this post reminded me that I still need to cop the Joe Dante book from earlier this year,