A-Mafia AKA the black Scrooge McDuff

You know how Noz jinxed Fat Trel's Nightmare On E St mixtape the moment he dubbed Trel the greatest Rapper under the age of 21 in America? Yo, I sorta feel like I put a similar curse on A-Mafia because no sooner do I sing his praises via the form of a compilation does he release a atrocious new mixtape called Under The Scope which completely halts any momentum he'd been building. Seriously, other than the previously leaked cuts Road To The Riches and the Real Live Pro remix with 2 Chainz, it's a disaster.

Thankfully, old boy seems to realise that the mixtape quickly sank without trace due to it stanking Datpiff up, and has returned to an earlier banger from 2011's What The Streets Made Me 'tape in an effort to patch up his reputation and begin rebuilding his buzz :


Chuck Zito-esque post-Dipset henchman-Rap par excellence, and possibly the only Rap video you'll see today where its protagonist compares himself to Scrooge McDuff and appears to pay homage to our homie Reza AKA The Arab Parrot : 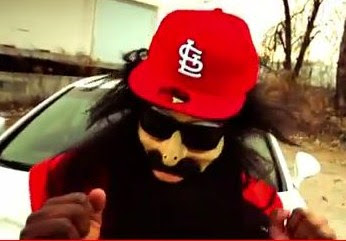 IMA PULL WHIPS OFF THE DEALER LOT WITH A DEALER KNOT