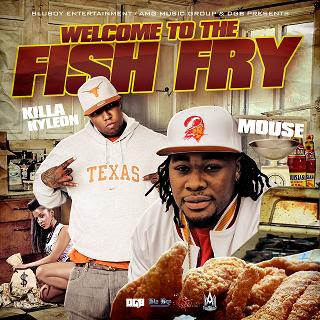 Fresh fade, fresh J's, on the corner playin' Spades, I'm a ordinary person but a Mouse On Tha Track stan, whereas my favourite Killa Kyleon joint is the one where Z-Ro bodied him on his own shit so I'm far from an objective commenter here, but it's slightly puzzling why Kyleon should take precedence over Mouse on the billing of their Welcome To The Fish Fry album when Mouse is the Pimp C to Kyleon's Bun B and Mouse has far higher stock in the game than regional people's champion Kyleon given that he's responsible for a handful of legitimate pop hits, huh?

And so it comes as a bit of a surprise that Kyleon kinda Raps his ass off on Welcome To The Fish Fry, and, unlike every other Rapper duets album from the past couple of years, its two exponents actually display chemistry, sound like they're having a ball, and have even bothered to write proper songs instead of just welding their respective Pro-Tools scraps together and asking "will this do?". Presumably this is because Mouse is currently in a zone where he's near-incapable of making a bad song and he's potentially the best Rapper/singer in the game since he somehow has a knack for making his every bar sound as if its crammed full of hooks as catchy as the "shoulders, chest, pants, shoes" refrain from the Wipe Me Down remix, and his choruses themselves are on some "the holy ghosts of Pimp C and Nate Dogg compel thee!" type shit.

If that's not quite enough, the album also contains the best Elm Street-themed Rap song since Jazzy Jeff & The Fresh Prince's Nightmare On My Street with this Kyleon solo cut :

Urrgh. I probably shouldn't have written this shit in 10 minutes as I was listening to the album. What this post should say is that although Kyleon is a good rapper he often struggles with writing songs which go beyond the usual Houston tropes and a so-so selection of beats. Like, more people are familiar with his freestyles over other people's beats than they are his own material.

That's why collaborating with Mouse is such a good fit for Kyleon because Mouse is a godamn beast of a producer/songwriter who can do all the nuts 'n' bolts work and inspire him to loosen up and come out of his comfort zone.

Ive gotta be honest, I like Kyleon but the only song of his thats not BOss Hogg Barbarians I've listened to more than a few times is Swang Real Wide, which I've listened to a few thousand times. He was a bit much for me on his own

Looking forward this though, Mouse is the dude.

"3500 dollas cash in the mall/ boy, you know I'm lyin I dont stunt that much at all/ them hoes think I got it tho, so I just play it off"

This is why I love Louisiana rap, because they say things like this.

Yeah, I could've done with more Mouse too, but the pay off is that I actually enjoy Kyleon's rapping on here since he's a bit more fun that usual under Mouse's tutelage.