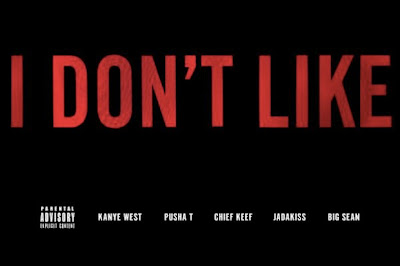 Since KanYe lost his touch for conjuring up common ground on which Rappers with contrasting styles could converge in 2005 and all the G.O.O.D posse cut from the past couple of years have been little more than contrived hodge podges of phoned in verses that last longer than the full 12 minute version of Rapper's Delight then I think it's safe to ignore the I Don't Like remix entirely when it does appear, and offer you 10 superior alternate line ups for it which would better capture the spirit of the original :


1. Statler and Waldorf from The Muppets.

3. The cast of The Breakfast Club excluding Paul Gleason.

Or, if none of those suggestions tickle your taste buds, then you could always just sample the delights of Wild N*ggas by Lil' Durk & Fredo Santana instead. It isn't the best track on the Durk 'tape, but it does manage to distill everything great about this current wave of Chi-Town thug Rap - King Louie's philosophy of oral sex over vaginal intercourse, Chief Keef's unemotional steeliness, the eerie Halloween OST-style sonics of both DJ KENN and Young Chop, a cameo by the scary sight in the cut himself - into a single song :

supa lolz at Big Sean being a rapper in general.

Since I'm not an Italian dude, no, that's not me.