You might have an awful lot to answer for in allowing Brendan Soderberg and Mindbender Futurama to pontificate about Rap for a living in major publications, but never ever forget that when it comes to downright terrible/laughable opinions about zee Rap muzik in print then my fellow British famalam will always have the game on lock thanks to The Guardian's many embarrassing dalliances with the genre.

From misspelling the names of Silkk The Shocker and Gucci Mane, to mentioning "the revolutionary polemics of Public Enemy" in every fucking article about Rap they've printed since 1990, The Guardian runs t'ings, t'ings nah run The Guardian. However, special attention should be paid to the work of Paul Lester for never failing to push out the boat into previously unexplored waters of Facepalm ocean whenever he's assigned the task of writing about this Rap shit. To wit, we've recently seen Paul laud the "avant-lounge stylings" of, um, A$AP Rocky, and declare Tyler, The Creator and Earl Sweatshirt are Odd Future's answer to Johnny Rotten and Sid Vicious without the merest sliver of irony. But friday's piece on SpaceGhostPurrp where he concluded that SGP's mediocre Memphis-lite knock offs are the sound of "the Cocteau Twins meeting in a dark studio with Wu-Tang Clan" has forever cracked the prism of white rock critics only being able to process black ppl musik via British indie music; so deep are these cracks that non-critics are now beginning to cast odd reflections in the prism, because Danny Brown just tried checking out his hair in it and he was confronted by all 5 members of Ned's Atomic Dustbin staring back at him : 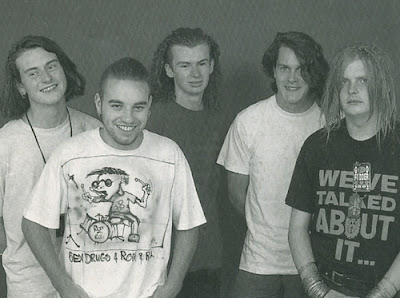 and the only east coast rappers they know about.

I clicked on the link to the article and similar to the first time I watched a Katie Got Bandz video, I had a knee jerk reaction to click out as soon as I read the phrases "almost too perfect" and "celestial gloom."

I fully endorse your venture to make fun of any and all clueless music journalists, it is a profession that has already been mostly replaced by recreational bloggers.

You need to get on your ILB and out Paul for having Eonoch Powell's biography on his pinterest profile or something, Fleet Streets Is Watching.

I fully agree with thomas's comment, and i gotta say, this is a goddamn good essay, breh

Shit, I'll have to come back to this one.