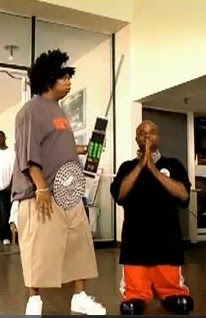 I probably shouldn't like Lil' Phat as a rapper much as I do, given that Webbie is clearly wasting his own talents ghostwriting for him and the whole Boosie and Marlo Mike murder trial situation (it's like the modern equivalent of the Azie, Rich Porter and Alpo yarn if Rakim and Rakim's brother Steve who played the keyboard on Move The Crowd were actually caught up in all the messiness!) appears to stem from Boosie wanting to leave Trill Entertainment over money issues and because Trill's owners Turk and Mel were putting verses by Phat (Mel's son) and Lil' Trill (Turk's son) all over his releases, yet I have a folder of 20 Lil' Phat cuts on my MP3 player that's now swollen to 21 with the leak of this :

This song, Gingerbread Man, the beats in the Mystikal video and that We Gone Talk joint of his with the Show kid off Curren$y & DJ Hektikt's Community Service 3.5 indicate that Mannie might be enjoying a casual renaissance of sorts, right? Anyway, Boosie never managed to secure the services of Mr. Fresh in his six years at Trill, and Webbie has only been a recipient of a Mannie beat just the once on I Know back in 2007, so serious LOLz at the spawn of a Trill co-owner here waltzing in for a song with Mannie on triple-threat production, rapping and hook duties that's ended up as a dime-a-dozen sunday evening Hulkshare throwaway. It's poor Foxx I feel sorriest for here, since, y'know, he's the technical proprietor of the biggest hit in the label's catalogue who's been long cast adrift into Worldstar oblivion so the children of the owners can live out their rap pipe dreams.
Posted by Kelvin Mack10zie at 11:21

what was pimp c's connection to trill entertainment then?

I think Turk and Mel were friends of his, so he helped them start up a label with the proceeds of their drug money by co-signing them.

On one of the Boosie and Webbie DVDs, they talk about how Bun and Pimp brought them to Texas to record Ghetto Stories to keep them out of all the street shit going on in Baton Rogue.