It's necessary we stays in Burberry WHOOOOO 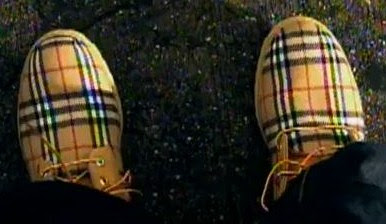 Two posts about songs by female rappers in the space of a week? It's almost like that Bidisha bint done bumrushed the Martorialist office plaza and forced us to post our favourite Foxy Brown joints from the noughties on the threat of throwing us in a darkened room with a stereo pumping out Lauryn Hill's acoustic album day and night if we don't comply :

Inexplicably, the original here goes way harder than the the all star remix which featured Martorialist favourites Nore and Baby (a song long since forgetten, but one of the biggest radio records of 2002 on Westwood and Flex's shows alongside Nothin' and Hovi Baby), and, as far as counterfeit Neptunes productions go, I favour this to Foxy's admittedly great authentic Pharrell & Chad manufacured joint from the Ill Na Na 2 : The Fever album which Stylin' trailed but was then shelved due to the web of legal red tape she was tangled up in due to being signed to Def Jam but managed by Puffy :

In summary, both these songs are great, Foxy is the matriarch of chick-rap off the amount of 5 Star General jams she has in her catalogue, that "conniver to Lady Godiva" line from the O.G version of La Familia obliterates Nicki Minaj's array of Muppet Baby impressions on Monster, and while she might be the height of a Time Bandits cast member and have the same jawline as Vincent Gallo, I have to acquiesce with DOOM's "wet dreams of Fox' Brown" lyric from Doomsday after falling asleep to the Thong Song remix video one night a decade ago.
Posted by Kelvin Mack10zie at 10:18

please tell me they're not your boots?

How do you not know that they're Cam'Ron's Timbs that he wore with the matching Burberry car-coverer in the Oh Boy video, Bradley?

I'm banning your IP until you get your Cam video outfits weight up.