"it's your attitude, Greg Nice, and your sideburns and that fade superstar haircut.." 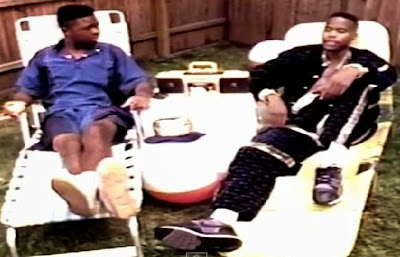 Who knew Nice & Smooth's Early To Rise had a video? And not just any old video but one with an extended intro over More And More Hits where Greg Nice & Smooth B trade homoerotic compliments on some proto-The Essence type shit and make eyes at each other? Not me until YouTube threw it up in my recommendations yesterday:


Other talking points here: Greg & Smooth bowling around a pool hall in those Dapper Dan garms from their debut LP's cover; a pool party which looks like it was shot in the same backyard as Cam'Ron's persona-deflating "it's gonna be a real motherf**kin' hot summer!" video; Early To Rise's status as a top 20 opening song on a rap album of all time.
Posted by Kelvin Mack10zie at 11:24

2 songs in this video are fine.

Is that first album worth hearing?

It's the best Hanna Barbera-rap album of all time, apart from one terrible slow jam which is 6 minutes long!

I dunno what the hell they were thinking putting that as the 2nd track on the album after Early To Rise.

This goes hard. Greg Nice's wink is the reason no homo became necessary.

Tryna decide whether a pair of ACG's with a Dapper Dan suit is a Lifestyle Synergy infringement or not.

Yeah, I think I got this on VHS.