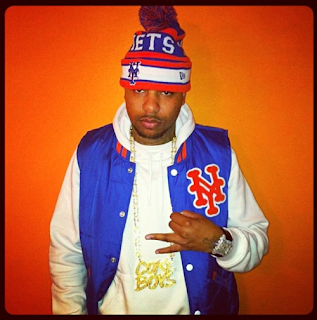 Damn. How very eerie that Stack Bundles' protege should die in much the same way as his mentor after Chinx Drugz had followed Stacks' career blueprint to a tee. Chinx had the moniker of someone who'd have gotten a shout out on a nineties Mobb Deep album, so it made total sense that his music would confirm him as the Big Noyd of Waviness, and please believe that's very much the gold standard for N.Y weed carriers.

Chinx wore the scent of unfulfilled promise after the peak of his Cocaine Riot 2 mixtape in 2012, but still managed to drop a handful of joints which deserved far better than the limbo of New York rap radio - like I told y'all back in 2013 Tell 'Em was THE one not Feelings. Let him be remembered for being one of the few rappers who didn't waste Harry Fraud's production and for always managing to bring the best music out of an opportunistic industry leech like French. Better still, let him be remembered for songs like these:

Always been a huge fan of his "Headquarters" verse. The guy could write: https://www.youtube.com/watch?v=8G9Pprhpmi4&feature=youtu.be&t=2m20s

"They say my mental is a gun but I broke the safety."

devil red mazerati, call the reverend on him
gave em my whole life but certain shit i never told em
choppin the pavement on them blades
most n***** get they shot, hardship is but a phase

Excellent call on that song, Drake.

Can't say I went super deep with Chinx's catalog, but the Coke Boys connected with the streets in a way no other NYC crew has since Dipset, without being on a self-conscious "bringin New York back" tip. Chinx was a big part of that. RIP.

I'm not a blogger....I just like to see the internet diddy-boppin' to my hot takes.

Also, it's so crazy Chinx died on the day when Don Daper created the coke advert in the Mad Men finale.

In an ideal world, French and Chinx would have been a duo with Chinx playing the Capone to French's NORE.