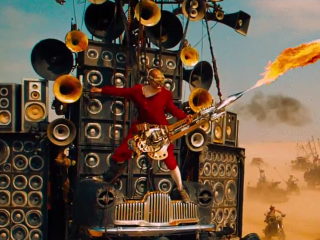 Obligatory round-up post of the songs I've been feelin' during the month when Mad Max: Fury Road single-handedly saved a genre as creatively moribund as guitar music.

What else? Lil' Mama's Sausage is more like an oral history of rap music than a song; saving RJ's If It Ain't Ace until the weather warms up; BeatKing's That Ain't My Thot is the greatest No Limit remake ever even if it doesn't bear repeated plays; someone needs to edit Migos out of DJ Clue & Meek Mill's Basic Bitch already; Good Thing might be billed as Sage The Gemini featuring Nick Jonas but it's blatantly the other way around; couldn't be arsed sifting through 100 songs by a rapper so hit-or-miss as Young Thug so I sat out The Great Rap Leak Of 2015.
Posted by Kelvin Mack10zie at 10:13

Interesting to see some grime on here. Along with your recent praising of a road rap song I wonder what you opinion is on grime/road rap vs. the uk hip-hop you've stuck the boot into on here before.

Thought the Boosie album was disappointing on the whole, not a patch on Life After Death Row.

https://www.youtube.com/watch?v=IE7T8bO80a8
Where I Come From

Swear he should do a whole tape with C-Sick.

Yeah, I'm glad somebody finally rapped over that beat because it was wasted on a remix which was just the O.G song's acapella over different production + some Carl Thomas sanging.

I like a few other grime/road-rap singles this year (Know Me From, Lukatar, Look Like You remix, Lean And Bop) but I'm sure they're all flukes.

Boosie album has a handful of standouts but it's the generic 2015 major label gangsta rap album I was expecting from him. Superbad: The Return of Boosie Bad Azz was flawed but at least you knew it was an album by a Baton Rogue rapper; this new one has practically zero regional identity.

Boosie needs to bin his Robin's jeans and go back to wearing Levi's. Can't be rap's number one outlaw when you're dressed like a Polish lad in the club.

The Boosie album isn't 10/10 but it's about as perfect as a major label street-rap album can be in 2015. Mr. Miyagi is my pick right now. Still avoiding the chris brown joint but i'll eventually listen lol.

Maybe if the album "flops" (are there any real expectations for this?) he'll drop 3 stellar mixtapes in 6 months a la future and buzz up real quick. TD2CH is a lot better than honest

This blog got mentioned by Noz and I've been fuckin wit it ever since
Just wanted to drop this Project Poppa slap off here:
https://www.youtube.com/watch?v=MM-oqb--BKU

I was truly sad when the guitar man died. My favorite on-screen axeman since Mistake and his amplifier backpack in Home Sweet Home.

I did some sifting on that Rich Gang windfall if you just want a few highlights check it - The Rich Gang: Unreleased Awards

And cheers, DUBSACKDAN. Will check those linx later.

Get Lil' Chris on the remix, imo.