A genre which made Koch Records a small fortune to cushion the financial blow of all those Krs One, Grand Puba and Onyx albums bricking in the early '00s, and that was almost single-handedly auteured by Jimmy Hart during WCW's late '90s pomp to avoid paying fees to real musicians after all the company's music budget was spunked away on paying for Flair and Hogan to come out to Strauss' Also Sprach Zarathustra and Hendrix's Voodoo Child (Slight Return), wrestling entrance musik was at its most glorious in the WWF's creative zenith of 1988 to 1998 when Vince employed an in-house crack team of composers to crank out the hits on some Beats By The Pound type shit. Bangers were on deck, son, yet it's a field still relatively under-sampled in Rap bar the odd song like That's Incredible by Heltah Skeltah and, um, yeah that's really all I can think of.

So, here's 3 classics from the WWF stable them Dipset boys should've graced with their dulcet tones in some form since they embodied the crass humour, alpha male posturing, morally bankrupt theatrics and latent homoeroticism of Vince's great empire better than any other Rap crew before or since : 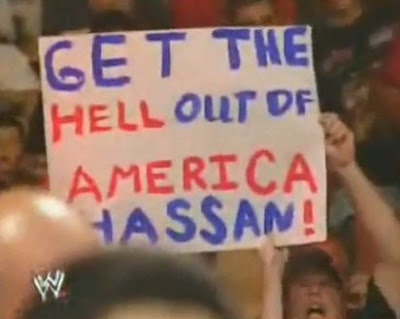 I'll never understand an Arabian oil billionaire like Sheikh Mansour bin Zayed Al Nahyan when he chooses to waste his money and time on football clubs in the near-Polish grimness of northern England instead of cruising around Dubai in a platinum tank blasting the Iron Sheik's theme at ear-splitting decibels as gaggles of 18 year old Serbian whores take turns to hang off his bellend with their lips, and that's why this beat would've been the perfect backdrop for Cam and Juelz to have gone back-and-forth with metaphors about 'the towers' over sometime between 2001 and 2004. 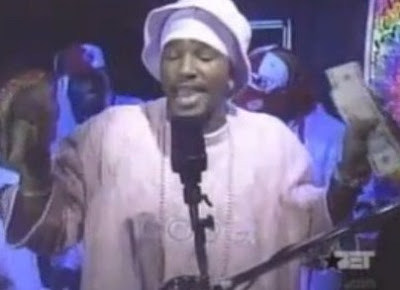 Capitalism, arrogance, 80s Hair-Metal guitar riffs which sound like they're cribbed from a W.A.S.P song, disembodied cackling, ABBA interpolations - will there ever be another piece of music more tailor made for Dipset to have blessed than Ted's entrance theme? Everyone from Cam & Juelz to Agallah & Shiest to Max & Stack to J.R Writer & Hell Rell could've made a top ten of all time joint over this, but knowing Duke Da God's sometimes questionable A&R decisions it probably would've ended up in the hands of the Virgil of the crew who manaaged to completely ruin the otherwise unimpeachable Dipset City with his verse of "if hip hop was _____" Raps which would even have Ugly Duckling blushing with embarrassment. 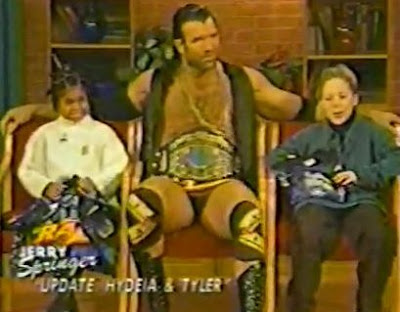 Eh, truthfully I suppose there isn't much Dipset could've done with Razor's entrance musik other than have Freaky Zeeky use it for a "fly, pelican, fly" Tony Montana-themed mixtape interlude or let it ride out as an intro for the Summer Wit' Miami video with a tracking shot of Jim, Max and Stack walking along Miami beach throwing toothpicks at joggers, but by posting it here I've now got an excuse to hit you with the time a clearly worse-for-wear Scott Hall slapped a British kids TV presenter on the arse on former saturday morning staple Live & Kickin'. Like he told us back in the day - the chicas, dey for fuuuuuuuuun :

Anonymous & hl are both correct.

Jake The Snake's theme was tailor made for an early #based freestyle or possibly an interlude on the version of Purple Haze that never saw the light of day with "Diamonds & Pearls" on it. Can't forget the Mr. Perfect theme song as a joint Cam should've smashed.

great post man. I remember when my mum did PR for Kevin Nash & Scoot Hall when they came to the UK. they were tripped off Coke the whole time and when their driver was paying for the petrol they went off and drove off without him. In the end Kevin Nash was too fucked to come to the signing and scott hall had to come on his own. He was disgusting though, I remember as a 7 year old kid thinking how much of a weirdo he was.

"metaphors about 'the towers'" had me lollin

Gabnob with my favourite comment of the week there.

Possibly one of the best blog posts ever. Gabnob (or his mum) needs to provide more anecdotes though.

this is an appropriate place to write this, I suppose:

I LOVE YOU MARTORIALIST (WILD HOMO).