I'm a boss, f**k you, my lemonade need cubes

So, this is where I hop aboard the King Louie bandwagon driven by David to ride shotgun alongside ANU by posting the song which convinced me to explore his oeuvre. The obvious stream-of-spazzing-out-in-one-take-over-a-naggingly-repetitive-vocal-sample A Milli record, Louie has cuts which are more distinctive than I'm Arrogant, but this shit bangs harder than the binmen at 6:40 AM on a monday morning and Louie's got the sort of fancy pants gas on here which has you scheming on peppering real life conversions with its lines, so I think it serves as the best introduction to him :
King Louie - I'm Arrogant (From Man Up Band Up Mixtape Before The Mixtape; 2010)
It's always been important that rappers should have some sort of identifiable image, but it's particularly necessary in the is-there-anybody-under-the-age-of-30-in-America-who-doesn't-Rap? era when Youtube videos are crucial in getting a handle on what a Rapper's persona is about and most people couldn't pick a ham 'n' egger like Meek Mill out of an identification parade even if he were standing next to Rick Ross wearing a I'M WITH FATTY -----> t-shirt. A$AP Rocky, for example, is instantly recognisible because he's a deadringer for DJ Quik in 1991, has a stomach tattoo in the NWA font and swaggerjacks Haptronic from Superfuture's whole O.G Goth Ninja look, and Louie is equally as memorable since he manages to work the whole fat dude with dreads & chipped teeth shtick way better than Fat Trel and also pulls off the dreads protruding from under a beanie steez without resembling a lesbian Prop Joe like E-40 did when that combination became his default look in 2008 : 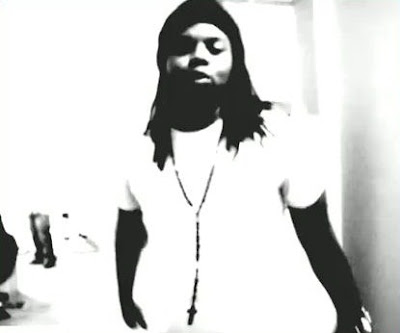 Given the "it was me all along, Austin!" secrete managerial curtain pulls on the Rap blogosphere with A$AP Rocky and Main Attrakionz this year, it wouldn't surprise me if Louie turns out to be an elaborate experiment in viral marketing by the SoManyShrimp team with a prosthetically disguised SergDun spitting lyrics penned by David. I guess Louie and Rocky are similar in that their music sounds equally regionally ambiguous, but the key areas where Louie differs are that his influences are broader, taking in the Bay & ATL, not just confined to a couple of specific eras, and, more saliently, he can really, really Rap and has more than 2 good songs. Admitedly this was written before I've had the chance to listen to Live.Love.A$AP but I think his manager's blog in its heyday captured the 90s Baby aesthetic Rocky's music is aiming for better than any of his actual songs, bar Peso and Wassup. DJ Iceberg's #ManUpBandUp mixtape is the ideal entry point into Louie since it collects most of his best songs from the past year and change into one digital dollop, so I'd recommend starting with that. I've pinky sworn not to post the cuts from his upcoming Dope And Shrimp mixtape I'm privy to, but I'm Arrogant's equal in the slap stupido stakes from it We Like To Party just leaked to Youtube. It wasn't me, honest!
Posted by Kelvin Mack10zie at 09:39

This post was needed cos surprisingly no-ones addressed the blograp directly, even Soderbergs just alluded to it. Shit was getting a bit too Almighty RSO-3 page spread imo.

Some of the beats on that A$AP tape though, god damn. Particularly Beautiful Lou's.

Undecided on the rapping yet though myself. Its more derivative than I thought it'd be like, hes specifically doing memphis fastrap one minute then Pimp C etc the next, instead of any sort of more fluid partly-influenced style of his own.

another thing i thought i'd mention, what really grabbed me about the Peso video in terms of ASAP's pretty boy value as a fashion plate, was the way hes dressed up first like percy miller, then in a shirtless/black bandana with his boys direct reference to the hot boys circa '98. No Limit & Cash Money of course are the two primary rap influences Louie mentioned to me when I interviewed him (in addition to that whole '98 class of DMX, Em, Jay-Z)

DB Tha General's outfit in the King Of Oakland clip this year was obviously a nod to Percy circa MP Da Last Don too, but I think the pioneer of sartorially homaging the grand imperial P. Miller would be Trey Songz in the Summer Wit' Miami video.

My fellow Canucks know who the REAL King Lou is.

feelin' the king louie jawn and the 2 jawns in the first video.

Purple Swag is the best song of the year.

I find Purple Swag to be pretty pointless other than to gawp at the hot girl-next-door chick in the video (blonds really do have more fun because she's allowed to drop n-bombs but V-Nasty isn't?) or to remind me that I haven't listened to Still Tippin' in a while. If you're going to homage a specific rapper/sound, then you should reimagine it in your own image like Lil B did with AZ's Firm Fiasco flow on Age Of Information.

I just look at Purple Swag as the 2011 version of that Edan song where he pretends he's found a rare & secrete Ultramagnetic MC's demo, but with even less replay value.

I was just thinking about the striking resemblance yesterday.

And only rap blog on the same level as RNT would be unkut, noz, and this place... but I'm really enjoying what I've heard from Rocky so far though... Purple Swag has grown on me but is far from his best work...

The tape sounds great so far and I've listened to Take 1 and Demons hundreds of times before so there must be something there. Perhaps a Snoop thing in that he's not the best rapper ever but just cool as fuck with tons of charisma and a great ear for beats.

re: Louie I've never heard of him before and the player aint loading... but will check out...

I'm just catching up to this:
SO Real N***a Tumblr is ASAP Rocky's manager?
What secret managerial curtain pull happened for Main Attrakionz?

From experience if you put up an email on your site then no-name rappers will email you hoping to work out some sort of 'business deal' and it is never not funny for me.

pretty sure every rap blog reader is contractually obligated to only talk about ASAP Rocky for the next 2.4 weeks. I would never wish this on anyone but if they're not careful ASAP is gonna go the way of hyphy

never thought of comparing louie & asap rocky, but obviously only one of em is a great rapper.

How lucky you are to get private king louie tracks (is this a new thing ? I already had half of liveloveasap) cuz WHEN IS DOPE & SHRIMP DROPPING ???!!!!.

Wow I had no idea about that.

i dont even know. it was supposed to be, like, october, but i think they may have decided to itunes it & push it back, giving out a stopgap freestyle tape > that's what I took from the WGCI-FM interview I posted w/ him on the shrimp. I'm not rlly sure what their marketing plan is at this point. i know that when I interviewed him he said he had 2 tracks left to do, i heard all the others + an instrumental of one left to be recorded. he also had an intro to do. but then "hes on fire" leaked as a video & that one wasn't one I'd heard either. probably playing it close to the chest

Apologies to Louie/Martorialist/David but one more mention of ASAP. I'm relatively sure RNT studied hip-hop iconography from the 90's with all the Source mag's he was scanning and came up with the greatest marketing scheme ever. RNT ran a great site but ASAP's music is totally soulless. The production, however, is fantastic.

I'm a big fan of "Man up Band up Remix" and "Kush too Strong" from Louie. Still need to spin More Boss Shit a few more times though.

Man Up Band Up (Get Money) and Wassup would sound awfully good alongside one another on a mix/playlist, I imagine.

This is true, and falls in line with "Wassup" being my favorite track by Rocky.

suga free has more jewels for u but quiks perm was wavier... ice-t tops all that though, not because he rocked that permed out ponytail swagger way out into the 00s, but because he used to frequent high school wearing those rolls in his hair that housewives use for making their hair curly... all according to that cris rock documentary on hair...

Listening to an interview w/ Chicago industry guy John Monopoly, and King Lou was mentioned. I thought to myself "oh yeah, that's the dude Martorialist is on"

I think the conversation is mostly about the early days of G.O.O.D. Music. If you care, peep.

Also, just realized that I don't have any contact info for you. Shoot me your email address if you don't mind. wboothe at gmaildautcalm