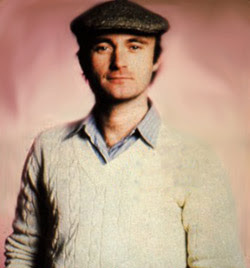 I now find myself at that stage in life where the only white ppl music I need to hold onto is a best of CD by Frankie Valli & The 4 Seasons, the Fun House album by The Stooges, a folder of old WWF & WCW entrance themes I've downloaded, the Rocky 4 OST, and 7 Phil Collins albums which span from 1981's Face Value to last year's Motown covers platter. And, y'know, I'm totally fine with that because who even has the time for Banannarama, Black Flag and Bernard Herrmann anymore when there's still Boosie mixtapes ya boy has yet to plunder out there?

But even when listening to rap music one can't escape the ever-looming presence of Phil; everybody knows Starin' Through My Rearview, I Can Feel It and Feel It In The Air by now, whilst What's Going On, Black? and Permanent Scars/Live From The Eastside are to dyed in the wool Rap nerds what In Too Deep and Sussudio were to Patrick Bateman. Ergo, ya boy has dug deep tonight to present you with 3 less celebrated Rap songs which somehow incorporated In The Air Tonight into their DNA:


Stuff I was unaware of before the internet: that this little known neo-Coldcrush Brothers Electro-Rap banger by Detroit crew Critics Choice predated Doug E. Fresh's Everybody Loves A Star as the first Rap song to use In The Air Tonight, although you have to wait until the 4:30 mark to hear it. Stuff I'm now aware of after discovering this song via the internet: I'll probably never own it on 12" because it's so rare that even badly beat-up copies go for upwards of £100.


Poet's resting place between his records with Rockwell Noel and his re-emergence as a part of Screwball, Proto-Dunn Rap at its finest, Cormega's 2nd appearance on wax, and a masterclass in vocal sampling by Hot Day with a pitched-up "I can feeeeeel it" bumping heads with a pitched-down "set it offf" for the hook. There's also a legit Dunn-Rap remix from early 1995 featuring Havoc and Kamikaze in Set It Off Part 3, though Havoc's verse is made up of lyrics he later re-used on The Infamous and there isn't a trace of Trill Phil vox in the song.


Whoa na, it's another classic from the Face Value of southern Saltine-Rap by one of the great Baton Rogue duos alongside Boosie & Webbie and C-Loc & Max Minelli. Sometimes a humble Rap blogger such as your author just has to take the back seat and let the lyrics do the talking, and so sing it, Delvin: "And I feel hear bullets hummin' through the air tonight *the airrrrr* ohhh nowww/And I been slingin', I been slingin' on this corner all my liffffffe - ohhh nowww!"

Jaysus I need to dig up that T-Bo & Mike Da Hustla album again, I was sleeping. Am I the only one hearing K-rino in the first dude's delivery? That Critics Choice is bangin.

I thought Tragedy said it first though? I think it was one of the Super Kids tunes, so maybe thats why the confusion.

There's definitely no Phil-isms on any of the 3 Super Kids joints,

"illmatic"'s first appearance, I meant. Its "illmatic-al" though in fairness:

am i the only one not being able to play the songs with the new divshare configuation ?

You're not, ANU. What a crock of shite. What are some alternatives to Divshare which let you embed musik?

Totes disqualifying that for the -al, Done.

I've found Dropbox is the easiest to use, you just drag the files you want uploaded onto a folder on your computer. Dunno if blogspot lets you embed them though.

Breezy put me onto that, but I found it a pain in the arse.

Divshare seems to have returned to normal now.

Will keep that in mind, thanks.

However, let's not overlook the Shaq joint feat. Bobby Brown:

Or the Lil Kim version:

Are Lil Wyte & T-Bo the only non-related members of their camps (RIP Hypnotize Minds) not to jump ship?

While we're on the topic of immortals like Phil, can a whigga get a blog post about Tom Jones inspired rap songs?