Trans-genre raps from that Baton Rogue rapper who had a great song about gettin' legged by the bizzies with Young Ready last year. ANU called Spitta "the Baton Rogue version of Styles P", which is a very valid comparison given that his gloating and warnings have the same Zen-like quality as Styles' rhymes. But there's also a blunt minimalism to Spitta's bars that's reminiscent of the poetry of Melachi The Nutcracker on Group Home's Livin' Proof album, and please believe that's a compliment because Melachi might be rap's greatest self-editor of all time. Who else could speak volumes with so few words? 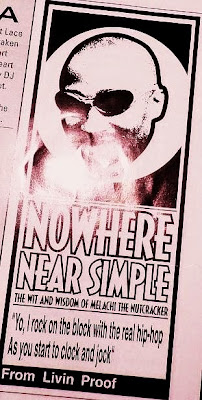 Where does that picture come from?

LOL at that Nutcracker quotable.