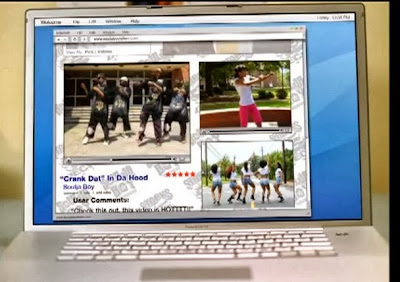 Has there ever been a greater tragedy on the Rap-internet than the loss of Fresh Squad's legendary original "Crank Dat" In Da Hood clip which featured heavily in Soulja Boy's official Crank That video? More than just teaching us the appropriate moves for every single line and steel drum reverberation in the song, it served as important a documentation of noughties Hip Hop kulcha as any of the Rock Steady Crew's scenes in Style Wars, Wild Style and Beat Street are to the eighties.

You could also view it as a riposte to Nas' Hip Hop Is Dead publicity stunt, so while we should mourn such historic footage going A.W.O.L from YouTube hitherto to return, we should also cherish the solitary Fresh Squad "Crank Dat" routine video which remains on the 'Tube so that future generations will always understand the reason why four teenagers Superman-ing Dat Hoe in public to Soulja Boy's second classic single better embodies the spirit of Hip Hop than any of the ill-advised dogshit Nas released between Thief's Theme and his first good song in eight years Reach Out :


Say what you want about the respective merits of Soulja Boy and Nas, but at least Soulja Boy isn't responsible for Make The World Go Round's existence, nor is his infamous "Shout out to the slave masters! Without them we'd still be in Africa, we wouldn't be here to get this ice and tattoos!" comment quite as retarded as the marketing campaign surrounding Nas' Dreaded-N-Word title album which hit its zenith of tastelessness with his ham-brained explanation of the album's concept at the 2008 Grammys whilst wearing a faux-Affliction t-shirt emblazoned with an N-bomb.
Posted by Kelvin Mack10zie at 20:24

I forgot about "Make The World Go Round". Nas really did lose.

You can't possibly believe this?

The essence of hip hop