Stone the crows, fellas - Michael "Marlo Mike" Louding is on Facebook and, yup, it does appear to be a legitimate account! 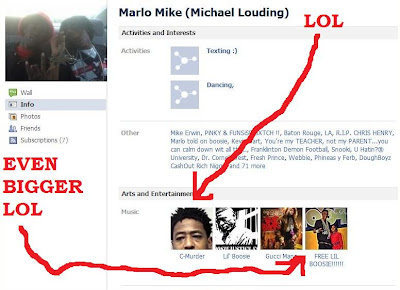 So let's just get this straight here : Boosie isn't allowed to use a computer to record new music in prison, but a homicidal teenage hit man like Marlo Mike is free to post on Facebook and advertise his admiration for Ashton Kutcher and Christiano Ronaldo? This is why Zuckerberg will never be as loved as Tom from MySpace.

Speaking of Trill Ent. recording artistes, thought I'd throw up the MP3 ofLil' Phat's latest video single Countin' Money since it appeared on a recent Trap-A-Holics mixtape and hasn't made its way to the 'net as a loosie yet. As I type this, I'm preparing to contact Gawker to see if they'll commission me to write a 20, 000 word article on Lil' Phat and his uncanny resemblance to what a Special Needs version of Trugoy would probably look like :

Email ThisBlogThis!Share to TwitterShare to FacebookShare to Pinterest
Labels: rap, underrated jams, why you wanna do that luv huh?, you so crazy

Did he Tell on boosie? Cuz thats ONE of thé Groups he's "liked"... Hmmmmmmmm