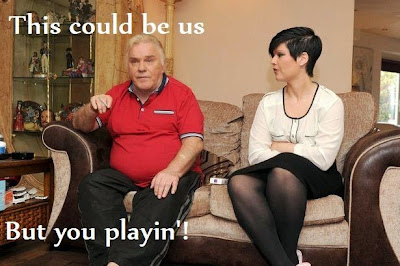 Meme-inspired Ratchet & Bullshit with explicit nods to Newcleus and Suga Free is something that feels like it was put together in a laboratory purely to appeal to my most feckless instincts. This wasn't something I was expecting to type, but I LIKE WHAT I LIKE: the combination of Eric Bellinger, Game & Problem over '80s synth-rap classics are now two for two in 2014.


"As soon as I smash, I'm on the gas
The man in the mirror, I'm smashin' through the glass"


Was gonna suggest that Eric Bellinger has the best batting average of any mercenary Ratchet & Bullshit sanger this year before I remembered his vocals on Marcus Moody's Juve sound like they've been Pro-Toolsed in by accident from another song entirely. Is Juve in any way noteworthy other than its novelty-factor of being another Mustard-produced 2014 rap radio minor-hit by a Californian rapper that interpolates something from the 400 Degreez track list? Moreover, where's the love for Solja Rags?
Posted by Kelvin Mack10zie at 13:02

better than the last time game rapped over "jam on it"

feel so sorry for that girl lol

"And here's Freddie Starr denying his part in any historic sex crimes against children, with his loving daught....wait, that's his wife?"

Remember that time Freddie Starr took his gardner in the potting shed?

This posts speaking to me. Suga Frees the become a Ratchet touchstone for some reason, this is like the 4th time I heard him referenced lately. hope he capitalizes off of it.

lol hows no one made the Freddie/Fredro connection til now?

It's The Sunz Of Man Wot Won It.

And I spelt gardener wrong.